10 Of The Best Ray Lewis Quotes – Quotes Of A Champion

Ray Lewis Quotes have become legendary throughout the sporting world, and with good reason. The former NFL superstar was a winner, period.

Pure and simple, Ray Lewis had to win. His hunger to become a champion and win every game was there for all to see. No one could match his drive, his leadership and his desire to win. 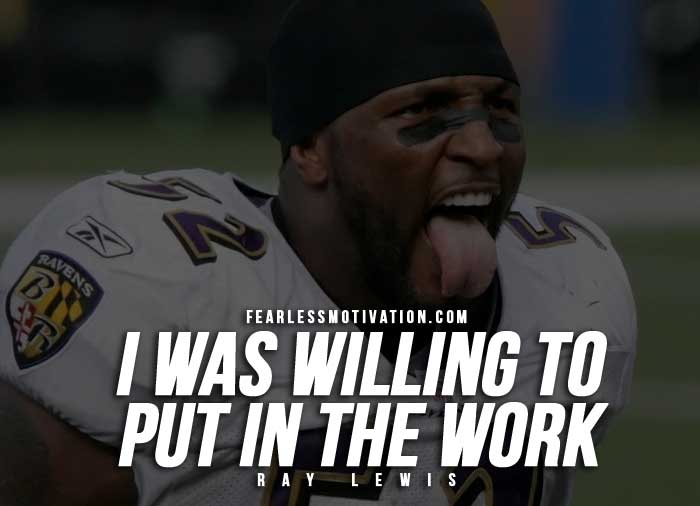 The legendary Ravens linebacker, Ray Lewis, won two super bowls and led the Ravens to the playoffs time and time again in the 2000’s.

He was selected to the pro-bowl an astonishing 13 times, and won the defensive player of the year in 2000 and 2003. He was also the second linebacker ever to win the Super Bowl MVP.

There’s more than one reason Ray Lewis is so loved in the city of Baltimore & throughout the world. You could bring up the championships, his desire, his passion, his heart and never say die attitude, all of which lead him to such great success.

At every home game Ray would come out of the tunnel and do his famous squirrel dance to pump up the crowd–his fire and undying emotion on display for everyone in attendance. In short, this is why we loved Ray, because he played the game with a palpable purpose, and the way he did it motivated not just the team, but the whole city of Baltimore every Sunday during the season.

It’s no surprise that Ray might have some interesting things to say about life and motivation, so without further ado, here are a few of the best motivational Ray Lewis Quotes – The Quotes Of A Champion!

1.) “Wins and losses come a dime a dozen. But effort? Nobody can judge that. Because effort is between you and you.” – Ray Lewis Quotes 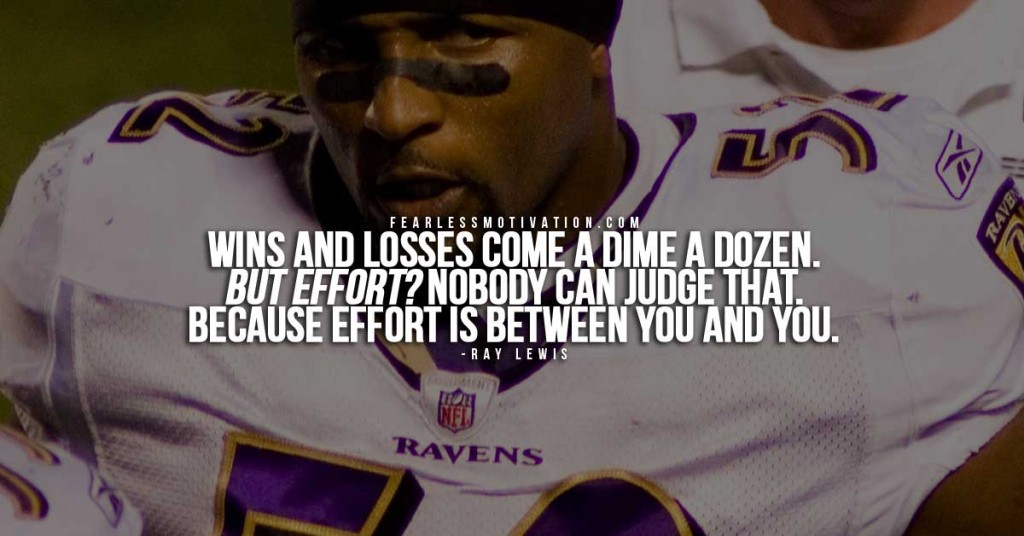 2.) “You gotta be hungry for it.  You’ve got to put everything you got on it.  EVERYTHING!  Every second.  You have to be the first one in line.  That’s how leaders are born.” – Ray Lewis Quotes 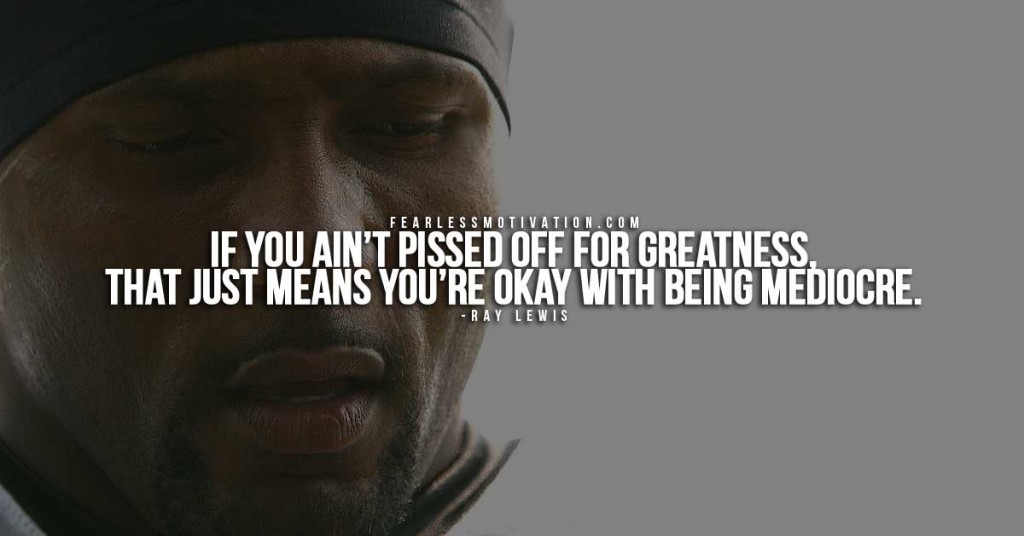 4.) “The only way to defeat pain is to recognize pain exists.” – Ray Lewis Quotes

5.) “What’s the difference between you and the man sitting beside you?  It’s 1%.  In my business, only 1% makes it. If everyone had the same dream, only 1 will make it from this crowd.  Who will be that one?” – Ray Lewis Quotes 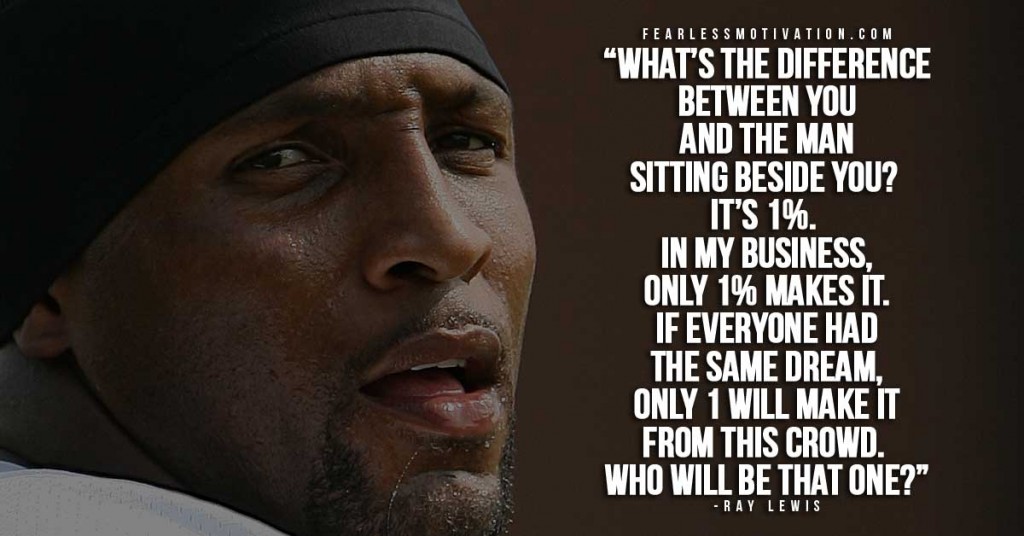 6.) “I figured something out.  And it is no secret what I figured out.  Whatever the majority of people were doing, I found myself doing the opposite.  I wanted to chase something great.” – Ray Lewis Quotes

8.) I’ll give everything I have, and today was about me giving everything that I had, showing people that no matter the circumstances you may be going through, just push through it. If you can push through it, you will encourage somebody. Today, hopefully, through what I did, somebody was uplifted.” – Ray Lewis Quotes

9.) “I prepare so no one can take what is mine, no one can replace my mind, my heart.” – Ray Lewis Quotes 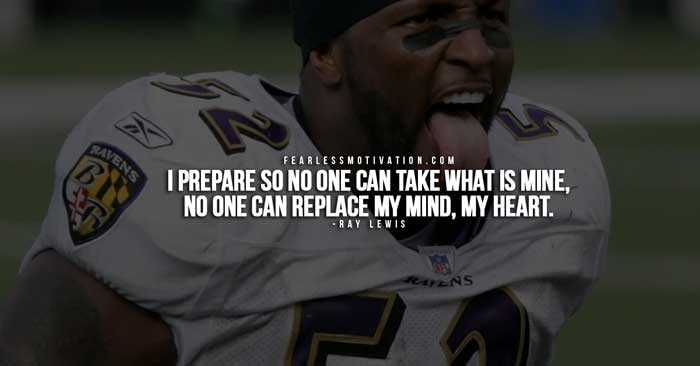 10.) “The greatest opportunity in the world is found here today… We already know what yesterday has got for us. It’s already gone. Tomorrow, too far away. What about right now?” – Ray Lewis Quotes

The Greatest Ray Lewis Motivational Video
If you play a team sport this speech will send chills down your spine: