World famous adventurer and survival expert, Bear Grylls, has managed to win all of our hearts with his audacity and charm. This forty-one-year-old British Rambo has completed numerous incredible feats during his life, showing everyone the true strength of will power.

Born in 1974 as Edward Michael Grylls, this man somehow managed to fit the adrenaline’s worth of ten lives in his one and only. The nickname Bear was given to him by his sister Lara when he was just a week old. Bear Grylls’ life accomplishments could fit in an entire bookstore, let alone inside one article.

The reason behind such an exciting life lies behind his extraordinary childhood and his unquenchable desire for adventure and exploration.  Since the age of five, he has loved the outdoors and frequently took sailing and hiking trips with his father. This love will prove to be the driving force in Bear’s life.

After graduating from the University of West England, Bear took on the Army as his next challenge. He was a member of the Territorial Army and he even served in the 21 SAS Regiment. His army training prepared him for any future obstacles as well as giving him the necessary mental composure to tackle any problem.

His astonishing story makes the headlines for the first time in 1998 when he became the youngest Brit ever to climb the Mont Everest at the age of 23. Furthermore, he climbed the roof of the world only 18 months after his parachuting accident in which he broke three vertebrae.

Bear achieved world fame with the TV series “Man vs. Wild” which aired for seven years. Using his overwhelming survival experience and skill, along with his love for nature Bear traveled the world showing the viewers how to cope with the challenges in the wilderness.

He went on to have quite an impressive TV career as he has done several other shows mostly about tactical survival in the unforgiving nature. In 2014, he even did a show with famous people called “Running Wild with Bear Grylls.” His latest project, “Bear Grylls’ Survival School” started airing in the January of 2016.

The part of Bear’s that he is the proudest of is definitely his charity work. He has attempted and finished several demanding projects in order to raise funds for numerous charity organizations. The fight for the preservation of our planet is one of his lead causes as he is one of the people raising awareness about global warming.

This privately humble and honest family man has since discovered how much his actions have affected others. He wrote several books and is a keen motivational speaker who gives speeches in schools and churches all around the world. Sharing his optimism and his skills in maintaining a cool head even in dangerous situations have become a trademark of this unbelievable person. Bear Gryll’s speeches have inspired many in more than just extreme situations in nature. Bear Grylls has managed to inspire people in believing in themselves, their abilities and the future of our Earth.

1. “Survival can be summed up in three words – never give up. That’s the heart of it really. Just keep trying.” – Bear Grylls Quotes 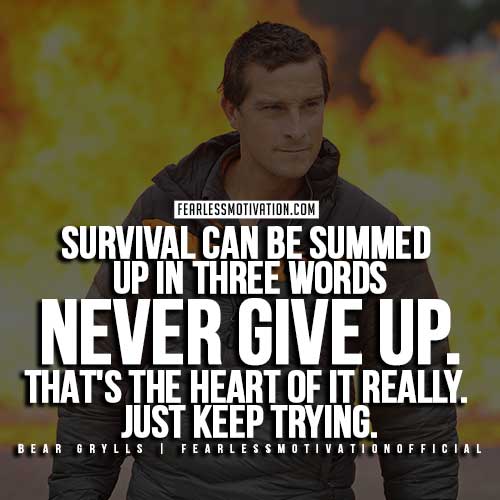 2. “A man’s pride can be his downfall, and he needs to learn when to turn to others for support and guidance.” – Bear Grylls Quotes

3. “The line between life or death is determined by what we are willing to do.” – Bear Grylls Quotes 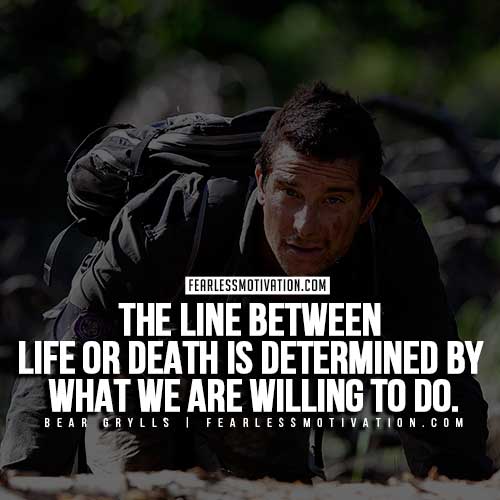 4. “Survival requires us to leave our prejudices at home. It’s about doing whatever it takes – and ultimately those with the biggest heart will win.” – Bear Grylls Quotes

5. “I loved climbing because of the freedom, and having time and space. I remember coming off Everest for the last time, thinking of Dad and wishing that he could have seen what I saw. He would have loved it.” – Bear Grylls Quotes

6. “All my life the only thing I’ve been good at has been climbing and throwing myself off big things.” – Bear Grylls Quotes 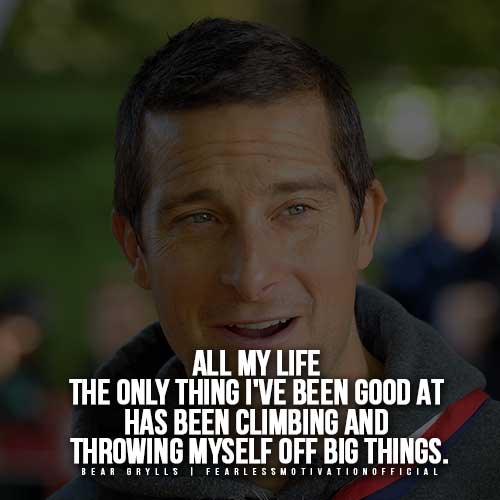 7. “As a young boy, scouting gave me a confidence and camaraderie that is hard to find in modern life.” – Bear Grylls Quotes

8. “To me, adventure has always been to me the connections and bounds you create with people when you’re there. And you can have that anywhere.” – Bear Grylls Quotes

9. “You only get one chance at life and you have to grab it boldly.” – Bear Grylls Quotes 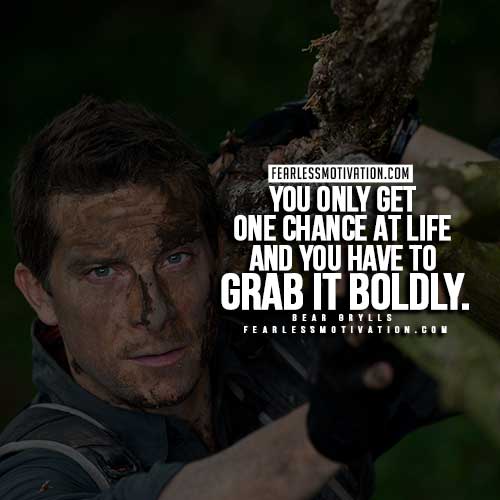 10. “I am not fearless. I get scared plenty. But I have also learned how to channel that emotion to sharpen me.” – Bear Grylls Quotes