In every moment of our lives we have choices. How we react to failure is no different. Most give up. Most make excuses. What will you do? Will you give up or fight for what you want in life?

You see it’s not the failure that stops us…
But that MOST stop at their first failure.

That’s the difference between success and failure.

WINNERS don’t enjoy failure but they would NEVER LET FAILURE STOP THEM!

Next time you encounter failure you’ve got to remember every great thing on this planet is here because the creator learned what DID work but learned more from what DID NOT work.

When we are kids we don’t stop at FAILURE.
When we first learn to ride a bike it’s FAILURE after failure.
We get knocked down time after time.
BUT WE GET UP AND PUSH FORWARD until we achieve our goal of riding the bike

But then,
We get old and most of us get weak.
We are too SOFT TO GET BACK ON THE BIKE.
We come up with EXCUSES
“It must not be for me”
NO, YOU’RE JUST SOFT. YOU’RE JUST LAZY!
Tell yourself the truth!

GET BACK ON THE BIKE!
Learn why you fell,
And make sure you don’t fall again.
Make sure you are stronger for having that lesson.

Failure is not the end of your story.  It is the START of your comeback story.
If failure was the end of the story  there would be no greats.
Greats like Jordan. Greats like Einstein. Like Edison. Like Oprah Winfrey.
If these people stopped at failure, the world would not be filled with their greatness as it is today.

Don’t let failure stop you.
Let it GROW you.
Let it DEVELOP you.
Failure is not the end.  It’s just the START . The start of your comeback story.

Failure doesn’t exist in the mind of champions, all it does is push them to a higher level.

Are you a champion?
Will you accept failure or keep going?

Some people fear failure so much they never TRY . They never even start!
Some people give up right when they’re about to succeed. They were so close, but they threw in the towel.

Don’t let that be YOU!

Thomas Edision didn’t fail. He found 10,000 ways that did not work!   Guess what! – He only needed ONE WAY that DID work!

“Failure is SUCCESS in PROGRESS”

Failure is not the end of your story, it is the START of your comeback story!

If you use FAILURE as FUEL – you can’t really fail.
If you use it as MOTIVATION,   you CAN NOT be defeated in the long term.
If you USE IT to drive you, USE IT to MAKE you, it can never break you.

If you never accept defeat, you can never fail.
REFUSE to be defeated.

Refuse to be defeated.
Learn the lesson. Find a new path. A different way to your goal.
There’s always a way. 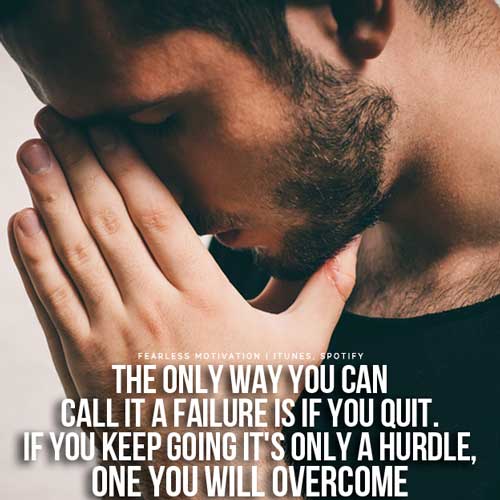