21 Inspirational Quotes On The Power Of Imagination

Imagination is beautiful. Because there are no rules to play by when we’re imagining. We can just dream about the things we want as if we already have them in our hands. As kids, dreaming felt so real. But then as we grew up, we became “realistic”. We lost touch with our imagination and our rich inner world.

Sometimes we need to stop living in an external world – on our smartphone, on our PC – all the time and get that rich inner world back. As the world’s toughest athlete David Goggins says, we need to spend some time alone to go inside ourselves and read our own book, the story we are living. Only when we do that can we bring our creative imagination to life.

Here are the 21 most inspirational quotes on the power of imagination that will inspire you to use yours and discover your own potential:

1. The power of imagination created the illusion that my vision went much farther than the naked eye could actually see. – Nelson Mandela

Everyone uses their sight but few people use their vision. We are the creators of our lives and our imagination is the very fabric from which every piece of the puzzle that we call life comes together. Before anything is manifested into existence, it is first dreamed and nourished in our imagination. This is one of the greatest inspirational quotes.

Knowledge trains our conscious mind, imagination taps into the infinite potential of our subconscious mind. Former Navy SEAL commander, Mark Divine, says that before we win in reality, we need to win in our minds. We should visualize winning with all the details as if it were happening for real.

3. Imagination will often carry us to worlds that never were. But without it we go nowhere. – Carl Sagan

Imagination takes us to realities that were never explored. It is truly magical to create unique things out of thin air. Nobody could have thought a couple years ago that we would travel in a Hyperloop or experience Virtual Reality. But it happened because of one person’s imagination.

4. The world is a canvas for your imagination. You are the painter. There are NO RULES. Get to work

The world is a canvas on which we draw our life with the creative use of imagination. We need to discover who we are, our innate talents, our desires and then bring them to life. There really are no limits to what you can create. If you can believe it, you can achieve it. (Original quote “This world is but a canvas to our imagination.” by Henry David Thoreau)

5. Laughter is timeless, imagination has no age and dreams are forever. – Walt Disney

You are as young or as old as your dreams. Many people have everything handed to them in life. But they don’t enjoy it because they have nothing to chase, no dream to fuel their spirit. Believe in your dreams no matter your age, laugh your lungs out and treat life like a game and get lost in the beauty of your imagination.

6. The man who has no imagination has no wings. – Muhammad Ali

We must have our feet on the ground in order to have a strong foundation. But we should never put a limit on our dreams. This is one of the most inspirational quotes.

Throughout history, people have created marvelous things by using their imagination. We have phenomenal athletes like Michael Phelps, disruptive entrepreneurs like Elon Musk, great minds like Stephen Hawking and extraordinary storytellers like Christopher Nolan. One man’s imagination can change the lives of millions or even billions of people. 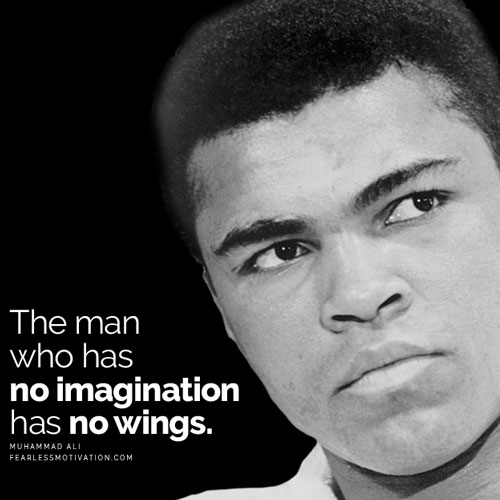 7. The true sign of intelligence is not knowledge but imagination.” Albert Einstein

We should definitely read books, reading is the mark of a curious mind. But we should use that knowledge to nurture our imagination. Because it is imagination that fuels our spirit and urges us to chase an innate vision. Knowledge helps us play by the rules, imagination helps us break through them.

8. Imagination is the only weapon in the war against reality. – Lewis Carroll

Reality isn’t as pleasant as it’s shown in the movies – rapes, terrorism, poverty, illness, child abuse, global warming – the world is broken. But with the power of imagination, we can create solutions to all problems and make a difference.

For example, Bill Gates has reinvented sewage treatment by creating the Omniprocessor, a machine that converts feces into delicious drinking water. He’s shown us that one man’s trash can be another man’s treasure if we just use our imagination.

9. What is now proved was once only imagined. – William Blake

Everything we have known or lived was created out of imagination. From our ancestors who created fire with stones to today’s forward thinking entrepreneurs, everyone had used their imagination to create useful things.

Our hearts have no limits, it is the mind we need to conquer. Our mind can create limits and fears that can stop us in our tracks. It can also make us feel confident in our abilities by having us believe in the possibilities for the future. Our task is to tame our mind so that we can make positive use of it. This is one of the greatest inspirational quotes ever.

11. Imagination is the soil that brings dreams to life. – Anonymous

12. Your imagination is everything. It is the preview of life’s coming attractions. – Albert Einstein

People say we cannot predict the future. Actually, we can see a large part of the future. We can have a preview of how things will unfold by looking at our thoughts, actions, and dominant beliefs. How we act today determines how life unfolds tomorrow. 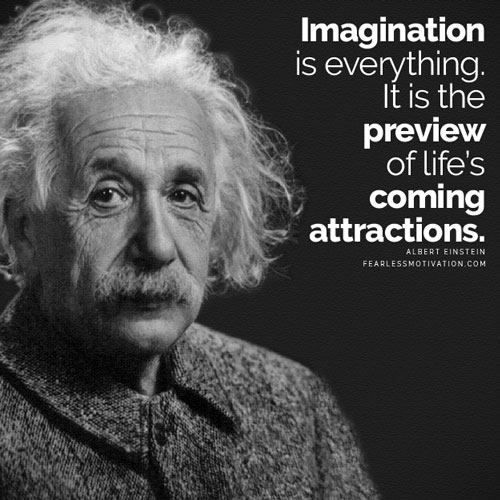 13. We are more often frightened than hurt, and we suffer more from imagination than from reality. – Seneca

The worst thing we can do is suffer in our imagination. People get tormented by fears that will never become real, they suffer from regrets due to events that should no longer dictate their reality. They are torn between the past and the future. We need to run our imagination instead of letting it run us. Among all inspirational quotes on this list, this one really stands out.

14. Imagination is the beginning of creation. You imagine what you desire, you will what you imagine, and at last, you create what you will. – George Bernard Shaw

15. Bring ideas in and entertain them royally, for one of them may be the king. – Mark Van Doren

People often get ideas, but they don’t act on them because of fear of failure. Never doubt your imagination. Act on your creative ideas and you’ll be surprised to know what you can accomplish. This is one of the best inspirational quotes on our list as it urges you to believe in your ideas and imagination.

16. I have too much imagination to be a housewife. – Marilyn Monroe

Society will try to put a leash on us, but it is in our power to decide how far we will go and how we will live. We don’t have to work 9 to 5, we don’t have to be rich to travel, we don’t have to pay bills and die. Break all the “rules” because they were created by people who didn’t follow them in the first place.

17. Reality leaves a lot to the imagination. – John Lennon

This sounds too simple but has a lot of depth to it. What is reality? What is the “real” way to live? How should things work? The irony is that the answer itself lies in our imagination. Schools, democracy, military, architecture – everything which is real was first conceived in the imagination.

18. The only limit to your impact is your imagination and commitment.  – Tony Robbins

What we can do is only limited by our imagination. It is true that not everybody can become an actor, not everybody can become the President of the country. But we have our unique talents, and in that unique field of talent, our potential is limited by our own imagination. In other words, once you discover your talents, your potential is limitless.

19. Limitations live only in our minds. But if we use our imaginations, our possibilities become limitless. – Jamie Paolinetti

Again, limits exist in our minds. For once, try not to live by the rules and see how your life changes. If you are bored with your life, take a month long vacation and travel. If you feel alone, meet people and connect with old friends. Do what you want to do, live your own truth, don’t live like a robot following every rule they have made for you. This is one of the greatest inspirational quotes ever.

20. There are certain half-dreaming moods of mind in which we naturally steal away from noise and glare, and seek some quiet haunt where we may indulge our reveries and build our air castles undisturbed. – Washington Irving

Everyone loves to dream. As children, we were told to dream, but as adults, many of us have lost that skill. We can build our castles without worrying about the hows and what-ifs. Because only when we first build the castles in our minds can we build them in real life.

21. Yes: I am a dreamer. For a dreamer is one who can only find his way by moonlight, and his punishment is that he sees the dawn before the rest of the world. – Oscar Wilde

Dreamers sniff future trends out of thin air. They “just know” how things are going to be. Because they intuitively feel everything and dream about things all the time. Dreamers see everything as a part of them and know how things will change.