Justin Timberlake is a remarkable musician and actor. With his sheer hard work and determination, he has achieved massive success in the entertainment industry.

He started off by singing in the best-selling boyband N’SYNC and later went solo in his career. His debut solo album “Justified” won two Grammy awards, showing that he had come to stay at the top.

But he didn’t stop with his success in music. He later explored acting and made many successful films like The Social Network, Friends With Benefits,  Bad Teacher, and Runner Runner. Apart from films, Timberlake has also shown his acting talent in television having won two Emmys for a comedy series he did in 2009 and 2011. 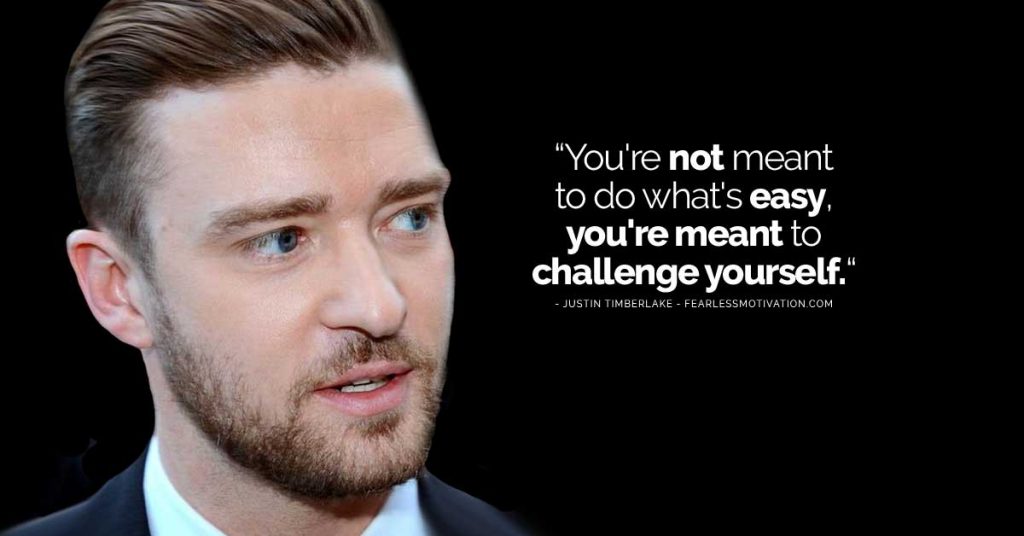 His enormous success shows that he’s a versatile and refined artist who’s not afraid to step out of their comfort zone.

Here are the top 17 Justin Timberlake quotes that will inspire you to be different.

1. “There’s nothing wrong with shooting for the stars.”

Don’t listen to people who say that desiring massive success is greedy, capitalistic, or arrogant. There’s nothing wrong with perfecting yourself to the point where you can influence thousands or millions of people and make their lives better.

If you don’t love what you do and work just for money, you’ll eventually give up. Because you’re letting the mind rule. Let your heart rule, do what you love, and money will follow. Because when your heart is in something, you’re able to break new ground and create something extraordinary. Justin Timberlake knows that chasing money is chasing an illusion.

As Kevin Hart says, “Everybody wants to get famous but nobody wants to do the work”. When you push yourself to perfection toward a goal, life will reward you with the greatest rewards.

4. “The way I grew up, I was always taught that it’s uncouth to talk about money, and that’s not what should inspire you.”

Money is not power as social conditioning might have told you. It’s the by-product of what people contribute to society. Your goal should be to express your creative abilities instead of chasing shallow goals such as money.

5. “Just writing and being in the studio was like therapy for me.”

When you can immerse yourself in your craft, you are able to innovate and work harder than others. Choose something that naturally pulls you. This is one of the best lessons you can take from Justin Timberlake.

6. “I was raised in a very humble environment, and I was always taught to be humble to the things that are happening in my life because they’re blessings. They’re blessings in every way. Whether you’re able to help someone get through a tough time in their life through your music or through comedy, or whatever it is, you’re just a channel.”

We need to keep our head in the clouds and feet on the ground. You can never become too successful to treat another person like your inferior.

7. “Gossip is called gossip because it’s not always the truth.”

Never indulge in gossip because it’s something unproductive people do. It’s better to talk to each other than talk about each other behind the back.

8. “I believe people can move things with their minds.”

The mind is a powerful tool at your disposal. The key is to tame your mind, have the self-discipline and consistency to work for your goals. An untamed mind can be the biggest enemy of a human being.

9. “You cannot make a difference unless you’re different.”

The most influential people in society aren’t afraid to step away from the herd. As Arnold Schwarzenegger said once, don’t be afraid to break the rules. Rules can create limitations for creativity and innovation. 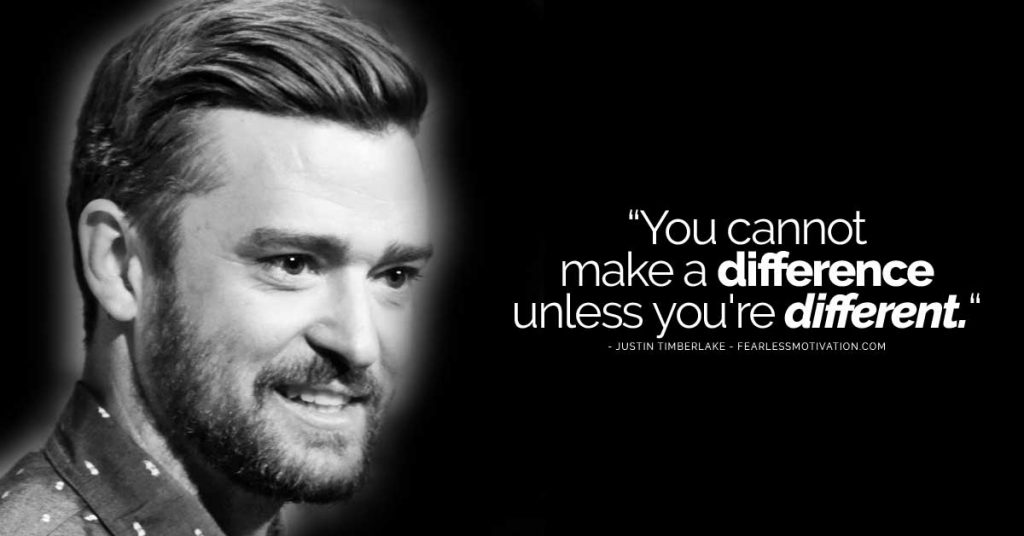 10. “You’re not meant to do what’s easy, you’re meant to challenge yourself.”

As Denzel Washington said, “Ease is a great threat to progress than hardship”. If it were easy, success would lose its value. The greatest things in life never come easy. Embrace this lesson by Justin Timberlake to get ahead in life.

11. “If I’m not learning from something that I’m doing, then that means I’ve done it before. Do something different, even if it’s within the same medium.”

If it is too easy for you, it means you’re not growing. Life loses its charm with growth and challenges, so always be willing to challenge yourself to the next level.

12. “Listen, I’m not cool. Being cool is about keeping your blood pressure steady. So no. Don’t be cool. Be passionate. Be dedicated. Be tenacious. Be uncompromising. Be pissed. Be happy. Be sad.”

We live in a society that tells us to be “cool”. But being cool all the time is like going to disneyland to have lunch and come back. There’s so much to do in life, to be passionate about. Don’t be cool. Explore, experiment, fall in love, fail, experience the diverse emotions because that’s the beauty of human experience.

13. “I think people sometimes don’t pay enough attention to what they do. I’ve done well, but the reason is pretty simple: I’ve worked my ass off. The toughest thing a performer can do is make it look as if it comes easy.”

Justin Timberlake has made it look so easy that we are tempted to think he’s gifted. Well, guess what? Everybody is gifted, what really differentiates people is their focus, determination, discipline, and consistency.

Beauty comes from inside, not outside. How you treat yourself is how the world will treat you. Fall in love with yourself, your body, your talents and the world will reflect this love back to you. What a unique and insightful quote by Justin Timberlake!

15. “The teachers that we actually learn more from are the ones that taught us life lessons more than trigonometry. And they have such a huge responsibility and they’re under-appreciated and underpaid. So that’s my opinion of teachers.”

Justin Timberlake is right in saying that the greatest teachers are those who teach us about life. Because the most difficult and worthwhile thing to master is life itself.

It’s okay to be competitive. But after you invest all that time and succeed, you might lack fulfillment. As Tony Robbins says, fulfillment comes from purpose. So always work towards a meaningful purpose.

17. “I think music will always be a big part of my life. I can’t go five minutes without singing, sometimes unconsciously. And people stare at me, and I’m wondering why they’re staring, and then I’m realizing that I’m belting out a tune.”

Justin Timberlake dedicated his life to something that comes naturally to him. There’s no secret ingredient to greatness. You have to follow your bliss and work hard.

The iHeartRadio summarized the massive contribution Justin Timberlake has made while awarding him with the 2015 innovator award:

“Only a handful of musicians in history have transcended all artistic boundaries, whether through music collaborations, acting, comedy, variety, putting together one of the biggest albums in recent history or staging the biggest and most technically ambitious tour of the last 2 years. iHeartRadio will honor Grammy and Emmy award-winning artist Justin Timberlake for his unparalleled position in the entertainment world and will pay tribute to his significant contributions to the music industry.”