21 Famous Quotes From ‘Think And Grow Rich’, The Legendary Book

Napoleon Hill is the original “self-help” author. His book ‘Think and Grow Rich‘ was published in 1937 and sold over 20 million copies within 50 years. Think and grow rich is considered to be responsible for more millionaires than any other book in history. Several self-help gurus of our era including Tony Robbins, Les Brown, Brian Tracy and others swear by this book and have used it for achieving breakthroughs in their own lives.

Think and Grow Rich contains an abundance of wisdom on how to access the power of your mind and use it to succeed in life. It explains that our thoughts, beliefs, emotions hold the power to shape our destiny and if we learn to use these tools to our advantage, we can manifest our dreams into reality.

Without any further ado, here are the top quotes from Think and Grow Rich.

1. Mind control is the result of self-discipline and habit. You either control your mind or it controls you. There is no hall-way compromise.

There is no bigger misery in this world than having a mind that is untamed. A tamed mind will let you take positive action and live the way you want. An untamed mind will create instability, compulsive behaviors, and self-destructive tendencies which will become the reason for your own demise.

2. If you do not see great riches in your imagination, you will never see them in your bank balance.

The imagination is more powerful than any tool you have ever used. It can access the infinite potential of the source and with its creativity one can bring huge shifts in their life. This was how airplanes were built, this was how Edison invented the lightbulb, and this was how the hyperloop will be built. 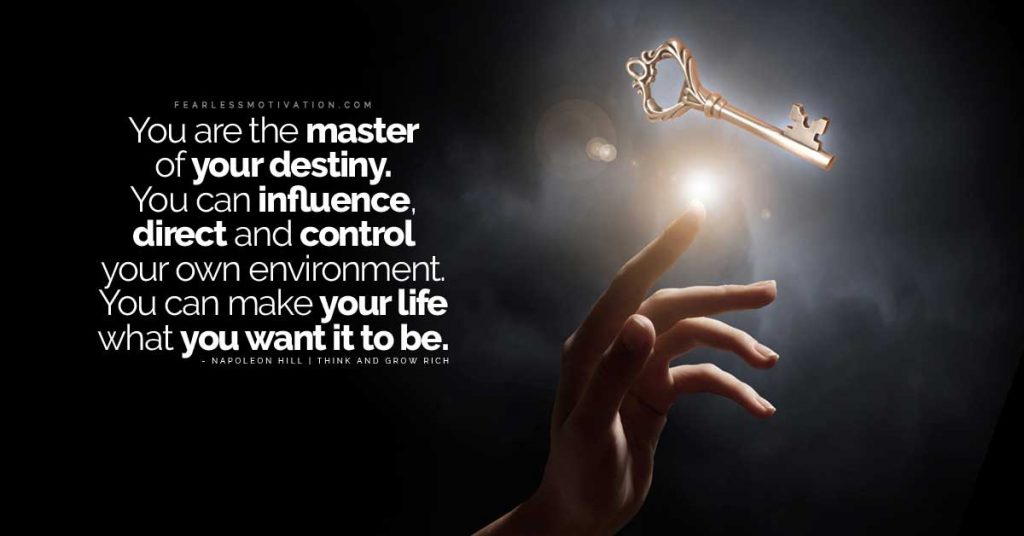 3.You are the master of your destiny. You can influence, direct and control your own environment. You can make your life what you want it to be.

You are the creator of your life and every time you don’t believe in your abilities and blame the circumstances, you give your power away.

4. Every adversity, every failure, every heartache carries with it the seed of an equal or greater benefit.

In the darkness lies the seed of light. Only when there are problems do we take the actions to rise above them. Without challenges, problems, obstacles, and darkness, the joy of life loses its charm. It won’t be worth it if it were all easy. We appreciate success so much because it is hard to come by.

5. All achievement, all earned riches, have their beginning in an idea!

Everything bears its seed from your imagination, from a single idea. An idea mixed with enough human creativity and force can transform our physical reality. 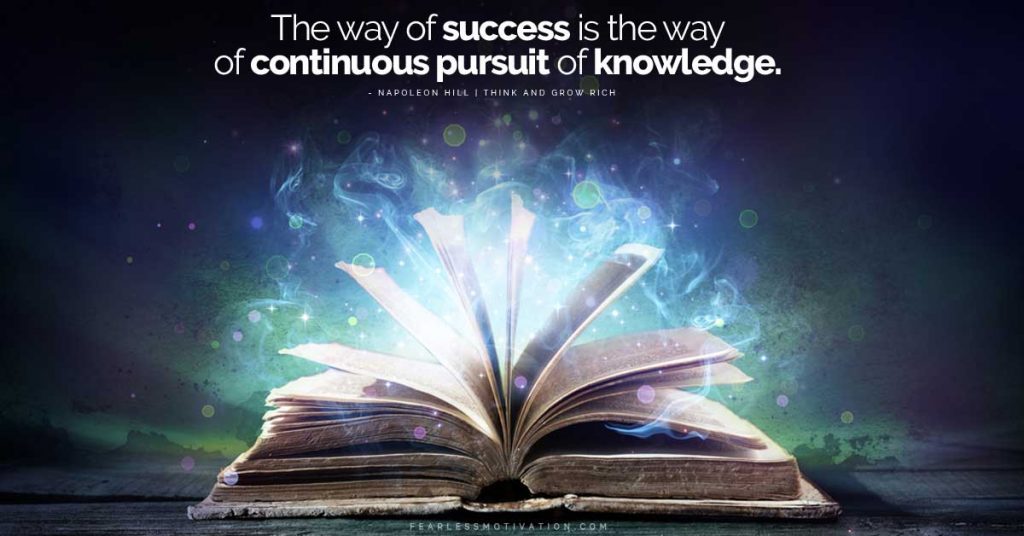 6. The way of success is the way of continuous pursuit of knowledge.

The more you learn, the more you can earn. It’s strange how millions of people will never taste greatness because they are not hungry for knowledge. Keep learning, keep growing.

7. More gold had been mined from the mind of men than the earth itself.

The earth itself is mined because the human mind was able to perceive that there could be treasure hidden underneath it. Tap into the infinite power of the mind and you will be able to create results you never imagined.

8. To win the big stakes in this changed world, you must catch the spirit of the great pioneers of the past, whose dreams have given to civilization all that it has of value, the spirit that serves as the life-blood of our own country – your opportunity and mine, to develop and market our talents.

The pioneers, the explorers of the world, have given everything it has retained today. Because of explorers from Europe, America could become the powerful nation it is today. And because of explorers in technology, we have the internet, the smartphone, the beautiful typography, and the ability to use technology for a better lifestyle.

9. Neglecting to broaden their view has kept some people doing one thing all their lives.

If you have fixed beliefs, you will never see the unlimited potential that lies inside you. You need to have an open mind to welcome new ideas and fuel them with your creativity. This is one of the greatest quotes from Think and Grow Rich.

10. If you are ready for the secret, you already possess one half of it,therefore, you will readily recognize the other half the moment it reaches your mind.

As Will Smith says, when you are ready, you don’t need to get ready. When you are always learning, working hard, and driven for success, new ideas will come your way as if it were all meant to be. Powerful momentum towards success attracts more success.

11. There is no substitute for persistence. The person who makes persistence his watch-word, discovers that “Old Man Failure” finally becomes tired, and makes his departure. Failure cannot cope with persistence.

Fear can only survive when you identify with it and accept your defeat. But if you keep pushing and focus on the light that shines inside of you, it will expose fear for what it is – a lie. This is a great quote to overcome fear from Think and Grow Rich.

12. Whatever the mind of man can conceive and believe it can achieve.

13. If you fill your mind with FEAR, doubt and unbelief in your ability to connect with, and use the forces of Infinite Intelligence, the law of auto-suggestion will take this spirit of unbelief and use it as a pattern by which your subconscious mind will translate it into its physical equivalent.

The more you feed the fear wolf, the more you will lose, the less you will believe in yourself. Fears become real because we keep feeding them with our thoughts. A belief is just a thought which is true for you. This is a great quote from Think and Grow Rich.

14. Every man is what he is, because of the dominating thoughts which he permits to occupy his mind.

15. Your subconscious mind recognizes and acts only upon thoughts which have been well-mixed with emotion or feeling.

Thoughts mixed with emotion create energy, momentum and influence our actions. The subconscious mind picks on our emotions and reflects back the messages in our reality.

17. When defeat comes, accept it as a signal that your plans are not sound, rebuild those plans, and set sail once more toward your coveted goal.

If you fail, understand that you have an opportunity to learn and succeed. Never give up. 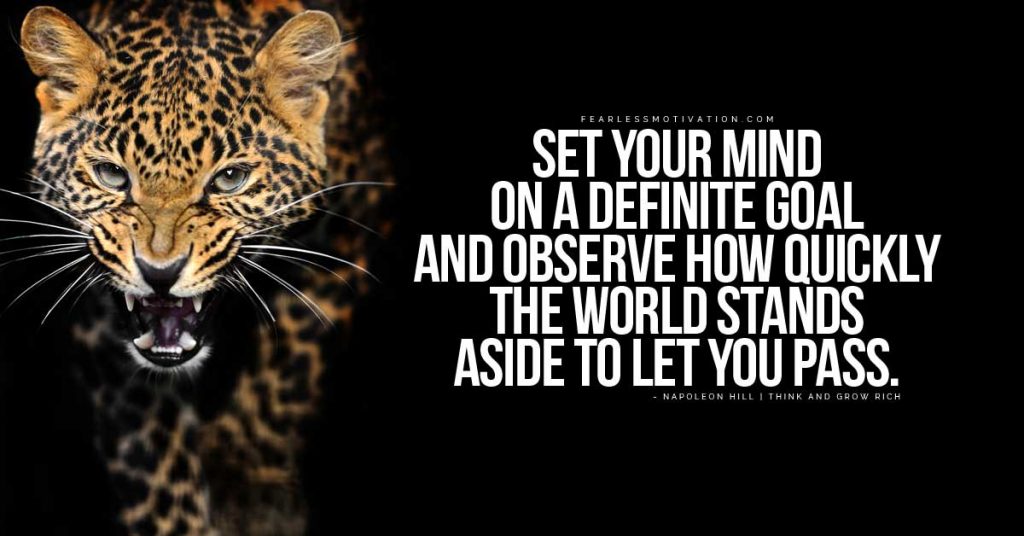 18. Set your mind on a definite goal and observe how quickly the world stands aside to let you pass.

Where focus goes, energy flows. People who live for a mission, a purpose, are the most successful in life. Their drive burns every obstacle that comes their way.

19. Fear, the worst of all enemies, can be effectively cured by forced repetition of acts of courage.

In other words, when you take courageous action, the law of reversibility will instill courage in you even if you were feeling afraid earlier.

20. Every person who wins in any undertaking must be willing to burn his ships and cut all sources of retreat.

You must be willing to give up the safe zone to fully access greatness. Suppose you earn $60,000 per year from a job that you really don’t like doing. Will you ever quit that job to work on your passion that brings only $10,000 per year? No.

You need to burn the ships first. Make sure there is nothing to fall back to. As Steve Pavlina says, the 7s in our lives are often the real obstacles in the path of the 10s. This is a brilliant quote from Think and Grow Rich.

21. Great achievement is usually born of great sacrifice, and is never the result of selfishness.

People believe that successful and great people are selfish and ego-driven. However, if you ever talk to any of the greats, you’ll realize that money was never their goal. Their goal was greatness and a dream they had seen at some point in their lives. And it took tremendous sacrifice to reach where they are today.

Michael Phelps practiced for five years non-stop, without taking even a single day off, until he was called the greatest swimmer ever. According to him, for one day off, it takes two days to get back to the same skill level and so he kept going with no break.