The greatest Motivational quotes of all time.
The best, most inspiring, fantastic, moving quotes in the world. We hope you are inspired by our list, from some of the greatest motivators and human beings ever to walk this earth.
What is your favourite motivational or inspirational quote? Comment below or contact us if you have something we have missed.

“Nothing is worth more than this day.”― Johann Wolfgang von Goethe

“A successful man is one who can lay a firm foundation with the bricks others have thrown at him.” –David Brinkley

“The journey of a thousand miles begins with one step.” –Lao Tzu

“Never give up on something that you can’t go a day without thinking about. – Unknown

“You miss 100 percent of the shots you don’t take.” – Wayne Gretzky

“I hated every minute of training, but I said, ‘Don’t quit. Suffer now and live the rest of your life as a champion.’” – Muhammad Ali

“Adversity cause some men to break; others to break records.”– William A. Ward

“There may be people that have more talent than you, but theres no excuse for anyone to work harder than you do.” – Derek Jeter

“Pain is temporary. It may last a minute, or an hour, or a day, or a year, but eventually it will subside and something else will take its place. If I quit, however, it lasts forever.” – Lance Armstrong

“You’re never a loser until you quit trying.”– Mike Ditka

“A champion is someone who gets up when he can’t.”– Jack Dempsey

“There are only two options regarding commitment. You’re either IN or you’re OUT. There is no such thing as life in-between.”– Pat Riley

“Some people say I have attitude – maybe I do…but I think you have to. You have to believe in yourself when no one else does – that makes you a winner right there. ”– Venus Williams

“Push yourself again and again. Don’t give an inch until the final buzzer sounds.”– Larry Bird

“You have to expect things of yourself before you can do them.” – Michael Jordan

“What you lack in talent can be made up with desire, hustle, and giving 110 percent all the time.” – Don Zimmer

“Most people give up just when they’re about to achieve success. They quit on the one yard line. They give up at the last minute of the game one foot from a winning touchdown.” – Ross Perot 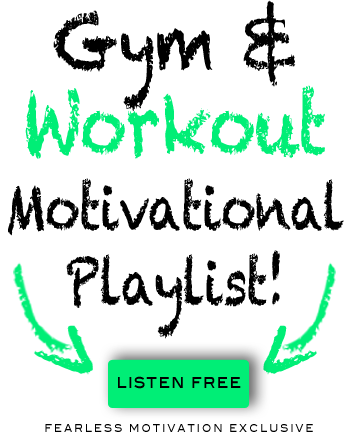 “If you want to achieve greatness stop asking for permission”. –Unknown

“If you are not willing to risk the usual you will have to settle for the ordinary.” –Jim Rohn

“All of our dreams can come true if we have the courage to pursue them.” –Walt Disney

“Success is walking from failure to failure with no loss of enthusiasm.” –Winston Churchill

“Just when the caterpillar thought the world was ending, he turned into a butterfly.” –Proverb

“Whenever you see a successful person you only see the public glories, never the private sacrifices to reach them.” –Vaibhav Shah

“If you don’t value your time, neither will others. Stop giving away your time and talents- start charging for it.” –Kim Garst

“A successful man is one who can lay a firm foundation with the bricks others have thrown at him.” –David Brinkley

“No one can make you feel inferior without your consent.” –Eleanor Roosevelt

“The whole secret of a successful life is to find out what is one’s destiny to do, and then do it.” –Henry Ford

“The ones who are crazy enough to think they can change the world, are the ones that do.” -Steve Jobs

“What seems to us as bitter trials are often blessings in disguise.”–Oscar Wilde

“The distance between insanity and genius is measured only by success.” –Bruce Feirstein

“When you stop chasing the wrong things you give the right things a chance to catch you.” –Lolly Daskal

“Don’t be afraid to give up the good to go for the great.” -John D. Rockefeller

“No masterpiece was ever created by a lazy artist.”-Unknown

“If you can’t explain it simply, you don’t understand it well enough.”  –Albert Einstein

“What you do speaks so loudly that I cannot hear what you say.” -Ralph Waldo Emerson

“Do one thing every day that scares you.” –Anonymous

“What’s the point of being alive if you don’t at least try to do something remarkable.”-Unknown

“Nothing in the world is more common than unsuccessful people with talent.” -Unknown

“Innovation distinguishes between a leader and a follower.” –Steve Jobs

“I find that the harder I work, the more luck I seem to have.” –Thomas Jefferson

“The starting point of all achievement is desire.” –Napolean Hill

“Success is the sum of small efforts, repeated day-in and day-out.” -Robert Collier

“Courage is resistance to fear, mastery of fear – not absense of fear.” –Mark Twain

“Only put off until tomorrow what you are willing to die having left undone.” –Pablo Picasso

“People often say that motivation doesn’t last. Well, neither does bathing – that’s why we recommend it daily.” -Zig Ziglar

“We become what we think about most of the time, and that’s the strangest secret.” –Earl Nightingale

“The only place where success comes before work is in the dictionary.” -Vidal Sassoon

“The best reason to start an organization is to make meaning; to create a product or service to make the world a better place.” –Guy Kawasaki

“It’s not what you look at that matters, it’s what you see.” -Unknown

“Success is liking yourself, liking what you do, and liking how you do it.” –Maya Angelou

“As we look ahead into the next century, leaders will be those who empower others.” –Bill Gates

“Whenever you find yourself on the side of the majority, it is time to pause and reflect.” –Mark Twain

“The successful warrior is the average man, with laser-like focus.” –Bruce Lee

“Develop success from failures. Discouragement and failure are two of the surest stepping stones to success.” –Dale Carnegie

“If you don’t design your own life plan, chances are you’ll fall into someone else’s plan. And guess what they have planned for you? Not much.” –Jim Rohn

“If you genuinely want something, don’t wait for it — teach yourself to be impatient.” –Gurbaksh Chahal

“Don’t let the fear of losing be greater than the excitement of winning.” –Robert Kiyosaki

“You can’t connect the dots looking forward; you can only connect them looking backwards. So you have to trust that the dots will somehow connect in your future. You have to trust in something – your gut, destiny, life, karma, whatever. This approach has never let me down, and it has made all the difference in my life.” -Steve Jobs

“The number one reason people fail in life is because they listen to their friends, family, and neighbors.” -Napoleon Hill

“In my experience, there is only one motivation, and that is desire. No reasons or principle contain it or stand against it.” –Jane Smiley

“I don’t want to get to the end of my life and find that I lived just the length of it. I want to have lived the width of it as well.” -Diane Ackerman

“There is no chance, no destiny, no fate, that can hinder or control the firm resolve of a determined soul.” –Ella Wheeler Wilcox

“Our greatest fear should not be of failure but of succeeding at things in life that don’t really matter.” -Francis Chan

“You’ve got to get up every morning with determination if you’re going to go to bed with satisfaction.” –George Lorimer

“To be successful you must accept all challenges that come your way. You can’t just accept the ones you like.” -Mike Gafka

“Success is…knowing your purpose in life, growing to reach your maximum potential, and sowing seeds that benefit others.” -John C. Maxwell

“Be miserable. Or motivate yourself. Whatever has to be done, it’s always your choice.” –Wayne Dyer

“To accomplish great things, we must not only act, but also dream, not only plan, but also believe.” –Anatole France

“Most of the important things in the world have been accomplished by people who have kept on trying when there seemed to be no help at all.” –Dale Carnegie

“You measure the size of the accomplishment by the obstacles you had to overcome to reach your goals.” –Booker T. Washington

“It is better to fail in originality than to succeed in imitation.” –Herman Melville

“Whatever you can do or dream you can, begin it. Boldness has genius, power and magic in it!”― Johann Wolfgang von Goethe

“You can easily judge the character of a man by how he treats those who can do nothing for him.”― Johann Wolfgang von Goethe

“A man sees in the world what he carries in his heart.”― Johann Wolfgang von Goethe,