5 Reasons Why Les Brown Motivational Speaker Is the Greatest 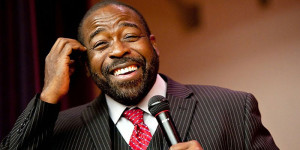 Les Brown is the premier motivational speaker and a leading authority on topics such as self-help, motivation, personal development and raising self-esteem. But he is more than those titles and is beyond those words. This is what makes him the greatest motivational speaker on Earth. He has entertained, informed and connected with crowds as large as 80,000 people in one session.

Les Brown has the ability to energize and motivate people from all walks of life. He skillfully weaves life-changing and compelling influential stories that leave a lasting impact. So, when you leave his sessions, you walk out as a different person.

Here are 5 reasons that justify Les Brown’s place on the top as the greatest motivational speaker on Earth.

1. He makes you believe “It’s Possible”

Self mastery is the key to achieve anything. Les Brown believes that if you give proper time and effort to any activity, there is nothing that remains between you and your goals. He not only believes in this mantra, but also makes you believe them as well. He is truly contagious when it comes to making people change their mind and making them embrace new possibilities. He states if you concentrate on any given task and are determined to develop yourself, you can transform your life.

2. He Leads by Example

He came from nothing and rose above circumstances to achieve success. His own life wasn’t any different than ours. He was born to a low income family living in Miami and was given up for adoption. Later in life, he was considered “Educable Mentally Retarded” in school but he overcame that.

Les Brown never let the comments and titles affect his self-esteem. He learned to reach his potential, all by himself. He also faced defeats when starting his career as a radio personality, but he didn’t give up and eventually received what he deserved.

3. He focuses on Holistic Development

He is one of the very few motivational speakers who not only focuses on self-esteem and self-help but focuses on holistic development. You cannot definitely perform well without good health. Health can’t be denied as a healthy body assures a healthy mind.

What makes him standout from other speakers is his ability to keep the audience involved. He uses humor to engage everyone in the crowd and brings the most out of them in just a single session. He fills you with gratitude and makes you live in the present.

4. He wants you to find your Purpose

Les Brown is an advocate of finding clarity in your life. All his sessions include learning, where he shares his secret to find the true calling in your life. He focuses on finding the purpose before starting something new, because if you know your reasons then there is hardly anything that will stop you from succeeding.

5. He is Fighting Mediocrity and teaches you to do the same

When our dreams are shattered, we often lose hope and stop weaving any sort of dreams again. That is the time when you accept defeat. It is at this time you settle for mediocrity and stop asking for more. From the start of his career as a motivational speaker, Les Brown has been teaching people to stop settling for the mediocrity. He makes you believe that you deserve more than you are settling for and this is why there is no need to be satisfied with less as you deserve more.

Les Brown has struggled through his own life and now works to ensure we do not have to. With so much to offer to his audience and the citizens of the world, not only does he teach us how to enjoy a better life but help others enjoy a better life too.

Les brown is one of the most famous, renowned, and powerful motivation speakers on the planet today.

His speeches are used in many motivational videos on you tube, and some, including “you can live your dreams” have become a worldwide phenomenon & he has a passionate loyal following.

Why is Les Brown so great? In one of his (now famous) speeches, Les describes how He was declared “educable mentally retarded” while in grade school. Despite this Les Motivated himself to reach his full potential, this is a key point he references in many motivational speeches he now gives, of course he got past this hurdle and went to to become regarded as one of the greatest motivational speakers in the world. A real life story of someone who has acheived so much when it did not seem possible for him to do so.

“Wanting something is not enough. You must hunger for it. Your motivation must be absolutely compelling in order to overcome the obstacles that will invariably come your way.”

“In every day, there are 1,440 minutes. That means we have 1,440 daily opportunities to make a positive impact.”

But what do we say?  ”But there will always be tomorrow.”   Oh, no. There’s no guarantees that you’re gonna show up tomorrow.  Always something there, the reason you can’t move on, the reason why you can’t grow to the next level, why you can’t being to manifest your greatness, why you can’t begin to live life on your terms, that you’re gonna say “it’s not worth it.”  Yes, that’s going to be right there for you, it’s going to be in your face, telling you to go back.  So if you want to do something, if you’ve thought about something you want to do, take it head-on.  Life will never be the same. Live your dream.””