Home
Never Give Up

20 Quotes On Overcoming Failure To Kick Fear In The Face

1. The only real mistake is the one from which we learn nothing. – Henry Ford

Some people get sad when they make mistakes. Some get excited and learn from the same mistakes. Who are you gonna be?

2. Failure is success if we learn from it. – Malcolm Forbes

Failure is the stepping stone to success. Without failures, how will you find your mistakes? How will you hone your skills?

When you make mistakes again and again, you start to see new streams of opportunities. Your vision becomes clear and you get the confidence to persevere.


4. Success is not final, failure is not fatal: it is the courage to continue that counts. – Winston Churchill

Success allows us to celebrate. But the lessons for growth come from failure. This is one of the best quotes on overcoming failure.

5. Every adversity, every failure, every heartache carries with it the seed of an equal or greater benefit.  – Napoleon Hill

No matter how hard circumstances may seem to you, they will always make you stronger and smarter.

6. Failure is so important. We speak about success all the time. It is the ability to resist failure or use failure that often leads to greater success. I’ve met people who don’t want to try for fear of failing.  – J.K. Rowling

Can anyone learn how to ride a bicycle if they’re too afraid to fall? No, right? The same is true for your life. When you try, you learn and get closer to success. 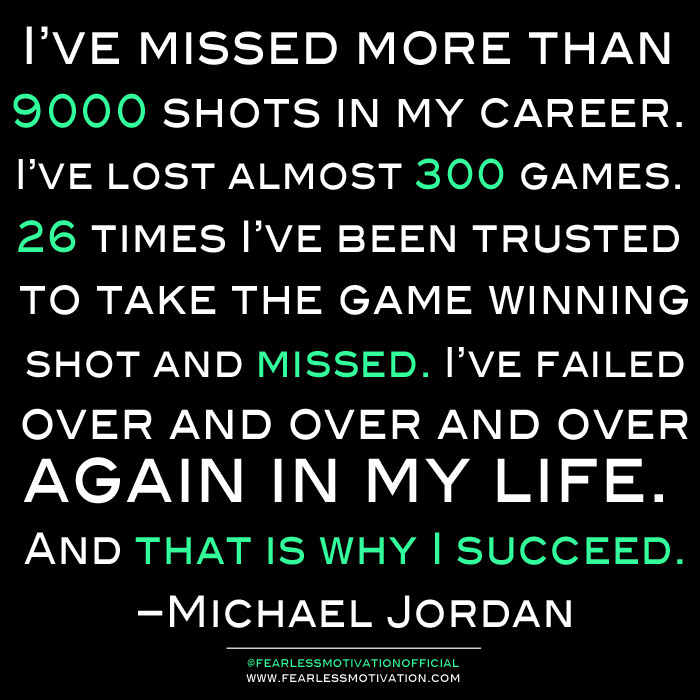 7. I’ve missed more than 9000 shots in my career. I’ve lost almost 300 games. Twenty-six times I’ve been trusted to take the game-winning shot and missed. I’ve failed over and over and over again in my life. And that is why I succeed.  – Michael Jordan

Twenty-six times! Jordan’s team had counted on him twenty-six times to win the game. And he lost. And he still became the GOAT (Greatest Of All Time). This is one of the greatest quotes on overcoming failure.

When we tell ourselves that failure is nothing to be afraid of, we open up a pandora’s box of possibilities. Imagine a runner running in a hurdle race. If he gave up after falling off the first hurdle, will he ever become a great athlete?

9. There are no secrets to success. It is the result of preparation, hard work and learning from failure.  – Colin Powell

If you believe you’re not lucky or smart, you’re making a big mistake. Greatness is about determination and hard work. Luck only happens when opportunity meets preparation.

10. Failure is the condiment that gives success its flavor. – Truman Capote

11. I think you have to try and fail, because failure gets you closer to what you’re good at. – Louis C.K.

Nothing is good or bad unless we give some meaning to it. See failures as opportunities and you’ll become unstoppable.

12. Failure after long perseverance is much grander than never to have a striving good enough to be called a failure.  – George Eliot

If you’ve made consistently failed at something for years, chances are, you’re better than most people who’ve tried. Because most people give up too soon.

13. You have to be able to accept failure to get better. – Lebron James

When we don’t accept failure, our brain makes sure that it doesn’t happen again. And in so doing, we lose wonderful opportunities.

14. Do not fear mistakes. You will know failure. Continue to reach out. – Benjamin Franklin

Every great person has to go through failure to realize their dreams. Knowing the value of failure, knowing its capacity to teach, can liberate us of our deepest fears.

15. The greatest mistake you can make in life is to be continually fearing you will make one. – Elbert Hubbard. 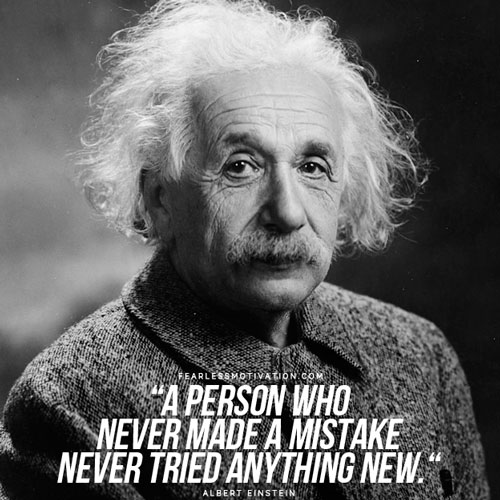 16. A person who never made a mistake never tried anything new. – Albert Einstein

One sure way to never fail: Never try. But if you never try, you will have one more guarantee: That of never succeeding. The truth is we can only LEARN and GROW from our mistakes. We learn more from failure than we ever could from success. The successful people of this world understand that failure is just an obstacle, a hurdle they will overcome. Failure is just one step closer to success.

17. Failure is an option here. If things are not failing, you’re not innovating enough. – Elon Musk

When you try to succeed at something new, the only way to grow is through failure. If you aren’t failing, it means that your goals are too small.

18.  Success consists of going from failure to failure without loss of enthusiasm. – Winston Churchill

There are two ways to go about failure. You can feel disheartened and self-pity. Or you can learn and get closer to your goal with this newfound wisdom. Which one will you choose? 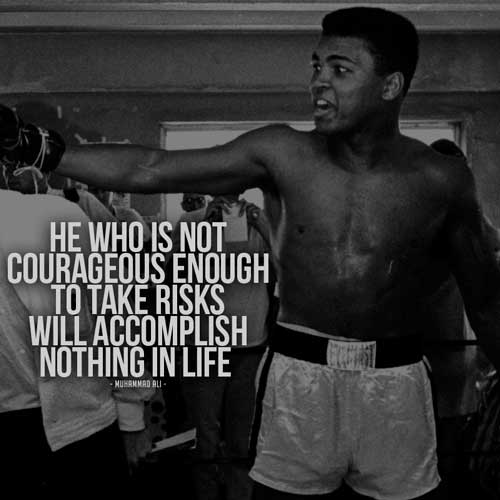 19. He who is not courageous enough to take risks will accomplish nothing in life.  – Muhammad Ali

20. Many of life’s failures are people who did not realize how close they were to success when they gave up.  – Thomas Edison

Will you give up if you knew that taking one more step would open a new door? Unfortunately, many people do. Don’t be one of them. Out of all quotes on overcoming failure, this one is a real gem.