11 Powerful Kevin Hart Quotes To Inspire You to Greatness

Kevin Hart is everywhere. He has been on multiple TV shows – Oprah, Jimmy Fallon, Conan, Colbert – you name it.

He wants to make history as a comedian and boy, is he making it already! In 2015, he performed in front of 53,000 people at the Lincoln Financial Field, becoming the first comedian ever to sell out an entire football stadium.

To put things into perspective, the top comedians generally perform in front of 10,000 to 12,000 people. Kevin Hart sold out five times as much, selling a million tickets in just one year. He’s surely teaching comedians how to make history.

His life story speaks volumes about greatness and the price at which it comes.

Here are some Kevin Hart quotes that can transform your life. 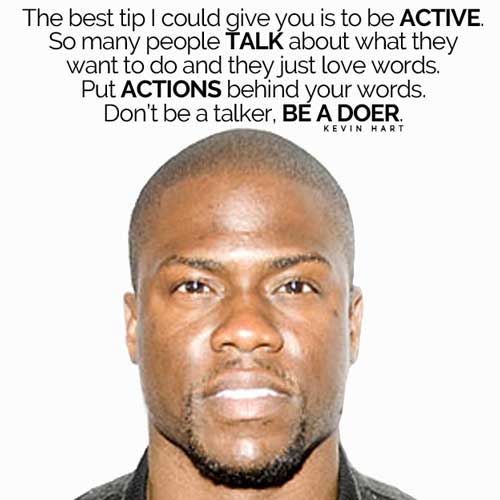 1. No matter what, people grow. If you chose not to grow, you’re staying in a small box with a small mindset. People who win go outside of that box. It’s very simple when you look at it.

It’s human nature to seek growth and expansion in life. We want to have experiences that broaden our horizons – in relationships, career, finances, spirituality – everything. If you don’t move forward and grow, your life will stagnate and lose its charm.

2. My experiences in life are getting bigger and better. The more stuff I do, the more stuff I talk about – having kids, traveling, going through relationship problems, dealing with things in my own family. All that stuff builds character.

Your experiences in life, both good and bad, will build your character. Especially, if you don’t give up in the bad times, you will create a strong character which is the foundation for success in life. Among all Kevin Hart quotes, this one is powerful as it shows how you build character.

3. My goals are so high that I don’t have time to relax, in any way, shape, or form.

Now you may think he’s crazy to say that. But you’re most likely taking it wrong. Once you start working hard, you’ll fall in love with the feeling of achievement. There will be no better thing to have, not even leisure. Sure you will take some time off every now and then, but you’ll learn the importance of a strong work ethic.

4. The best tip I could tell you is to be active. So many people talk about what they want to do and they just love words. Put actions behind your words. Don’t be a talker, be a doer.

People love to weave interesting stories about their dreams. But few actually take action to realize those dreams. So if you want to be successful, put actions behind your words. Among all Kevin Hart quotes, this one speaks the highest truth about the journey to success.

5. Appreciate hard work and the process of hard work. Because after that’s over and you get the rewards of success, you look back on these moments and you respect those moments the best. You have no character, you have no place to come from.

Imagine how it’d feel if you got all the money and fame without doing anything. Think of Kim Kardashian. Ahem, ahem. Will people respect you? Will you respect yourself for all money and fame? No. People only respect the greats because they put their heart and soul into something worthwhile and achieved extraordinary results. This is one of the most insightful Kevin Hart quotes ever.

6. Laughter heals all wounds, and that’s one thing that everybody shares. No matter what you’re going through, it makes you forget about your problems. I think the world should keep laughing.

It is necessary to work hard in order to succeed. But it is also necessary to laugh with your friends and family to heal and be in touch with the flow of life.

7. The only time you should look back in life is to see how far you have come.

People often feel sad because they live in the past, thinking about what didn’t happen and what should’ve happened. But the only time you should look back is to see how you have changed for the better. This is one of the greatest Kevin Hart quotes ever.

8. Life is too short to worry about what others say about you. Have fun and give them something to talk about.

You can never please everyone. No matter how successful you become or how generous you are, some people will find a way to hate you. So focus on your own journey and have fun along the way.

9. The best feeling in the world is seeing the benefits and rewards of hard work.

Sitting idle or watching a TV series on Netflix isn’t going to give you the deepest satisfaction. What really makes us happy is when we are actively pursuing a worthwhile goal. And when that goal is achieved, our happiness knows no bounds.

Everyone wants to be a billionaire and enjoy the fame, but few are committed enough to work hard. This may sound tough, but it also reveals a huge opportunity as well. The majority of people aren’t willing to work, and if you do, you can easily rise to the top.

Personal growth guru Steve Pavlina says that most people practice their craft a little here and there, even when their goals are substantially huge and this is why they end up as average. According to him, “if you stick with your craft for 3+ years, you’ll be well beyond the majority of them, and they will never match your skill.”

Loyalty is rare and yet one of the most admirable value in people. Loyalty simply means supporting those who supported you. If a friend was with you through every thick and thin, it’s your duty to lift their spirits up when their life gets tough.