15 Magical J.K. Rowling Quotes and How She Overcame Adversity

From living on welfare to becoming a billionaire, J.K. Rowling’s success story is filled with hardships, insights, truths, and a bit of magic.

Almost everyone has watched a Harry Potter movie once in their lifetime. And if you love reading or watching fantasy, it must have swept you right off your feet. But few people know that the Harry Potter novel was rejected by twelve publishers before it finally made the cut. 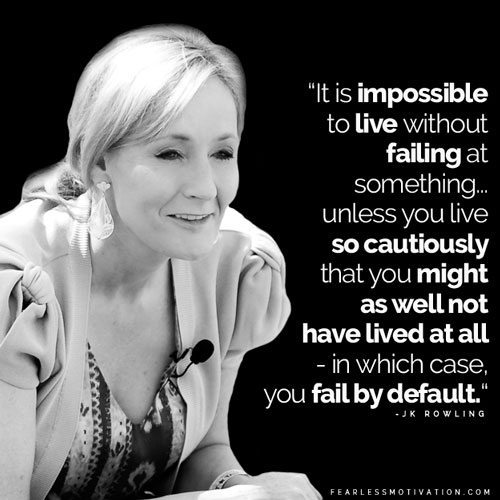 J.K. Rowling didn’t write the novel while living a comfortable life. She was unemployed, had a failed marriage, was mourning the loss of her mother, had to look after her daughter by herself, and put food on the table while being in the shackles of depression and hopelessness.

“Failure meant a stripping away of the inessential. I stopped pretending to myself that I was anything other than what I was, and began to direct all my energy into finishing the only work that mattered to me.” — J.K. Rowling Quotes

She had sunk into a deep depression, but it was her love for fiction that gave her hope. Writing gave her a chance to see a bright future again. When the world had taken everything from her, she used creative writing to get lost in her vivid imagination and feel the joy that had been long lost.

“We do not need magic to change the world, we carry all the power we need inside ourselves already: we have the power to imagine better.” — J.K. Rowling Quotes

After many trials and tribulations, Rowling’s efforts finally culminated after she reached out to the thirteenth publisher. If we take into account books, box office earnings, toy sales, DVD sales, and rentals; the Harry Potter series has amassed a total of 25 billion dollars.

This remarkable feat earned her the highest honor in children’s literature, theHans Christian Andersen Award and also the highest civilian honor of France, the Legion d’Honneur.

Rowling’s success is seen in the fact that every 30 seconds, someone in some corner of the world starts reading the Harry Potter series. This is the impact she made on the world. She created a story, a legend, that people will remember for years to come and tell their kids and grandkids about.

She had failed in every area of life by the standards of society. She had no job, no relationships, and no record of achievements. But her imagination was rich, it helped her create her own heaven and provided the fuel to persevere in such harsh circumstances. Her imagination not only kept her happy, it helped her create the billion-dollar fiction story that would change her life forever.

“It is impossible to live without failing at something unless you live so cautiously that you might as well not have lived at all – in which case, you fail by default.” — J.K. Rowling Quotes

Rowling is among the most charitable celebrities ever. She was the only celebrity who dropped off Forbes’ Billionaire List because she gave away 160 million dollars to charity. In a world where people are shedding blood, sweat, and tears to hoard wealth, the kind author couldn’t care less about the billionaire tag.

Rowling founded Lumos in 2005, an organization dedicated to ending the institutionalization of children so that they can have a safe and nurturing environment. On top of that, she has her own charity, Violant, that protects people against social deprivation.

Rowling’s charitable streak didn’t start after she became wealthy. She was always a giver at heart. After she graduated from college, she worked for Amnesty International, an organization that protects human rights. Also, she served as the president of the Gingerbread and funded the Multiple Sclerosis Society for many years.

Her generosity stems from a deep understanding of pain and suffering. She spoke about how poverty can break a person in her Harvard Commencement Speech:

“[Poverty] is not an ennobling experience. Poverty entails fear and stress and sometimes depression. It means a thousand petty humiliations and hardship.” 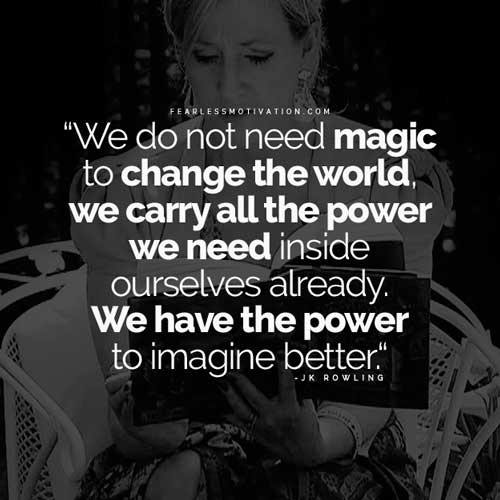 Here are 11 additional J.K. Rowling quotes that will create magic in your life:

1. If you want to know what a man’s like, take a good look at how he treats his inferiors, not his equals.

This is one of the best J.K. Rowling quotes ever. It shows a man should give respect first to get respect.

2. It is our choices that show what we truly are, far more than our abilities.

Clearly, one of the most magnificent J.K. Rowling quotes. We are what we do, our choices, not what we say we can do.

3. You sort of start thinking anything’s possible if you’ve got enough nerve.

If you have enough nerve, the will to work for something till the bitter end, you can have anything in life. One of the greatest J.K. Rowling quotes ever.

Focus on quality, not quantity in life. J.K. Rowling quotes are simple yet profound, that’s why we love them.

5. I have never been remotely ashamed of having been depressed. Never. What’s to be ashamed of? I went through a really rough time and I am quite proud that I got out of that.

Embrace your emotions, don’t hide from them. Great people harness energy from their emotions.

6. Life is difficult, and complicated, and beyond anyone’s total control, and the humility to know that will enable you to survive its vicissitudes.

Never act like you know everything because arrogance only lasts until reality hits you in the face.

7. You will never truly know yourself, or the strength of your relationships, until both have been tested by adversity.

Adversity is the building block of anything great and beautiful. When we face problems, we grow into a stronger version of ourselves because we have no other option.

Luck can give you success, but that success doesn’t last long. Therefore, to have lasting success, you need to build skills and work hard. One of the greatest J.K. Rowling quotes ever.

9. Humans have a knack of choosing precisely those things that are worst for them.

We often repeat the same mistakes again and again. Always try to fix things quickly. Life is about bouncing back from failures.

10. There is an expiration date on blaming your parents for steering you in the wrong direction; the moment you are old enough to take the wheel, responsibility lies with you.

After you reach your 20s, you are the master of your fate and captain of your soul. Don’t blame anyone else if things don’t go well. One of the most moving J.K. Rowling quotes ever.

11. It matters not what someone is born, but what they grow to be.

Whether you are born to Bill Gates, or as a poor person like Denzel Washington who worked as a garbage man before he became an actor, you have to make your own fortune no matter where you started from.