It’s time to overcome your fears and live your dreams. It’s time to look your fear right in the eye and say: Get out of the way, I’ve got things to do!

One of the most important things any human being can do is rise above being human.
From an evolutionary perspective, the mind has developed to keep you safe.
The mind has developed certain algorithms that made sense from an evolutionary perspective, it made sense when what we had to worry about was being eaten by a lion jumping out of the bushes, but it no longer makes sense in a modern context.

But once you realize that now, in a modern context you can take control of the evolution of your own mind you can leverage the fact that what humans are, what makes us great, isn’t what got us here.
It’s our ability to adapt. It’s our ability to look around at the environment that we live in now and say: How can I shape myself to make sense in this world?

And the truth of being a human isn’t just that you’re going to feel fear.
It’s that you can overcome that fear.
It’s that you can on a conscious level, literally, manipulate your subconscious mind into growing stronger into feeding you emotions that will make you feel confident into building the confidence that you need in order to face the difficult things, in order to face the things that you’re most afraid of, and in fact, if you’re goal oriented, if you’re’ trying to build something that really matters, if you’re’ trying to be an agent of change, if you’re actually trying to have impact in this world – the thing that you’re going to have to focus on is overcoming those lesser impulses.

And being able to leverage the fact that we, as humans are adaptation machines…
I know at times it feels that what we really are is failure machines, we’re fear-mongers.

But a the end of the day what makes us great is our ability to change.

So whether you feel fear or not is irrelevant.
It comes down to what you do on the other side of that and at the end of the day that’s all that matters.

“Courage is not the absence of fear.
It’s rising up in the face of it.”

And so if we can all do that and have the courage to act even in the face of fear, then you can do something extraordinary with your life and that’s it.

That is what people hunger for.
They want do something.
They want their time on this earth to be felt.
They want an echo.
They want to have mattered.

But you’re never going to be able to do that unless you can first overcome fear.

But that ultimately, is in your control.
So take advantage of that. Push yourself. Develop.
Force yourself to become that vision of who you know you can become.

And if that demands overcoming fear then overcome it. 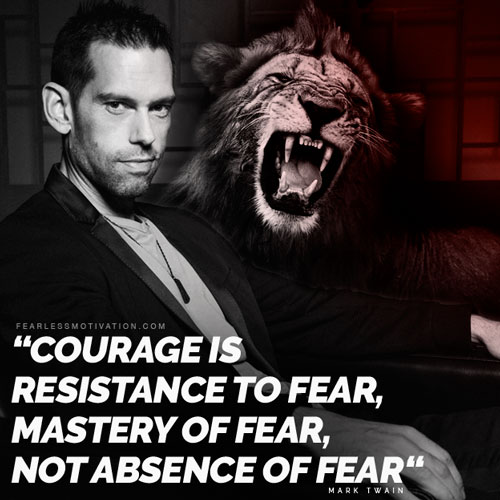 About the speaker:
Tom Bilyeu is the co-founder of 2014 Inc. 500 company Quest Nutrition — a unicorn startup valued at over $1 billion — and the co-founder and host of Impact Theory. Impact Theory is a first-of-its-kind company designed to facilitate global change through the incubation of mission-based businesses and the cultivation of empowering content. Every piece of content Impact Theory creates is meant to underscore the company mission to free people from The Matrix and help them unlock their true potential. Impact Theory exists to inspire the next generation of game-changing companies and creators that will make a true and lasting impact on the world. Follow Tom on Facebook