Elon Musk is one of the greatest minds alive on our planet and here is one of his greatest motivational speeches ever.
His name is probably going to be remembered along Einstein, Tesla, and the likes. The amazing thing is that he’s just not a great engineer, but also an equally great entrepreneur.

He has disrupted multiple industries at once – the automotive industry, the oil industry, the aerospace industry, the military-industrial complex the energy utilities – and he’s actually succeeding at all of them.

This Elon Musk motivational speech teaches us a lot of lessons. Here are the most powerful ones:

“When something is important enough, you do it even when the odds are not in your favor.”

If you have a vision or a dream and there is no well-trodden path to it, you can’t just give up. You have to take the risk and follow your heart even when you have to go all alone. A few years ago, nobody would have thought that electric car could be used as your main car. But Elon Musk took the risk and built a mainstream electric car with Tesla Motors.

The market rewards risk as much as it rewards knowledge. If you’re taking the risk, you’re doing something new and unique, and since few competitors would take the same risks, the market will reward you handsomely for it. If Elon Musk hadn’t taken the risk, this wouldn’t be one of the greatest motivational speeches on the web. Risk is rewarded when played well.

“A well thought out critique of whatever you’re doing is as valuable as gold.”

Whether you have a job or a business, you’re producing a product with your work. And to make your product stand out, you need to listen to feedback. You have to take your product and put it in front of knowledgeable people, and even your friends, to provide you with valuable feedback.

Weak people get discouraged by criticism. Strong people use it to their advantage. They take the feedback from others, see if there is any truth to it, make the improvements in their product if needed and raise their game up a notch. This is how winning is done! 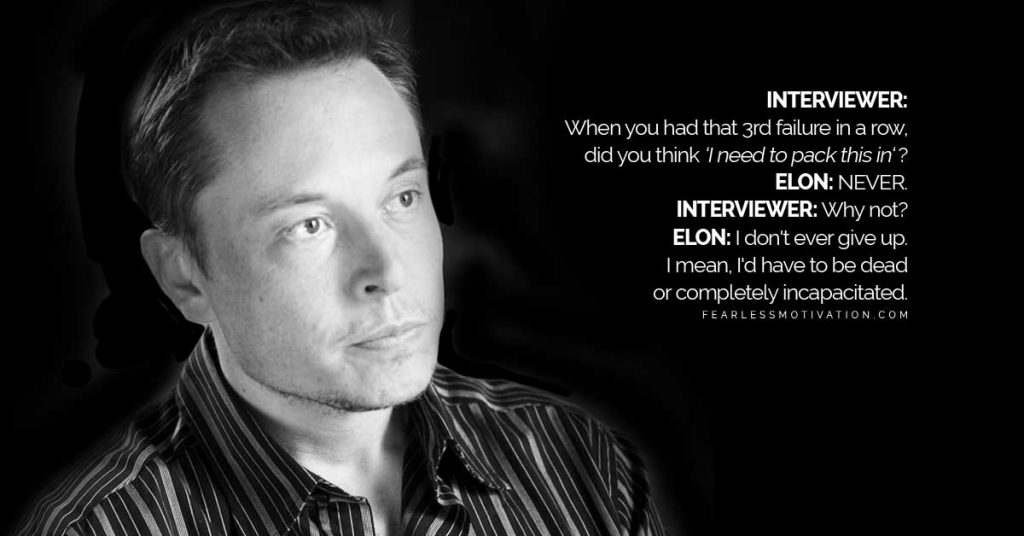 This short excerpt of Elon Musk’s conversation with a CBS journalist shows that no matter what happens, he never gives up on his dreams.

Interviewer: When you had that 3rd failure in a row, did you think I need to pack this in?
Elon: Never.
Interviewer: Why not?
Elon: I don’t ever give up. I mean, I’d have to be dead or completely incapacitated.

That’s right. Musk failed three times in his attempt to launch successful into space. He spent all of his money into SpaceX, the millions of dollars he had earned from selling PayPal and all his wealth. That’s how much he believed in his dream.

To everyone’s shock, he still failed. But he didn’t give up. Because he trusted his intuition, his vision. You need to believe in yourself before you go out in the world and turn that vision into reality. It is this unyielding determination that makes this video one of the greatest motivational speeches.

4. Have Burning Passion For Your Work

“If you like what you’re doing, you think about it even when you’re not working. It’s something that your mind is drawn to, and if you don’t like it, you just can’t make it work.”

Elon Musk says that you have to like what you do. Because if you don’t, the work will become a form of abuse that you inflict on yourself and you won’t be able to push harder in tough times. So choose to work on something that you’re naturally drawn to, whether it’s music, math, or aeronautics. This is certainly the best advice from one of the greatest motivational speeches ever.

Most people get confused when given this “generic” advice to follow their passion. If you’re confused, remember this: you follow your passion by following your efforts. See how you’ve spent most of your time in the past, be patient, keep experimenting, and you’ll soon discover your passion.

“If other people are putting in 40-hour workweeks and you’re putting in 100-hour work weeks, then even if you’re doing the same thing, you know that you will achieve in four months what it takes them a year to achieve.”

You really need to outwork your competition in order to come out at the top. Don’t expect to be a millionaire if you’re lazy and work just a couple hours here and there. One must have discipline and consistency. This is certainly one of the greatest motivational speeches as it shows the power of hard work and dedication.

And when you love what you do, there’s always a way to push the envelope. You can expand your skillset, learn something new, and keep it interesting. And when it’s interesting, you won’t shy away to put in those 80-hour or 100-hour weeks.

“I think it [colonizing Mars] would be the most inspiring thing that I can possibly imagine. Life needs to be more than just solving problems every day. You need to wake up and be excited about the future.”

Life is too short to solve problems, pay bills, and die. There is a higher power in this world and it wants you to create and enjoy this one life you’ve got. You don’t have to punish yourself by doing things you hate. Choose to live an adventurous life which makes you wake up feeling excited for what’s to come. Few people advise others to have a little adventure, but Elon Musk is unique and that’s why he gives one of the greatest motivational speeches.

Too many people spend their entire lives in quiet desperation only to realize that their life has come to an end and they can’t do anything about it now. So wake up, go hiking, camping, travel to another country, jump off an airplane (with protective gear), do anything to make your life adventurous. You are not here to act like a robot.

“A lot of companies get confused. They spend money on things that don’t make the product better.”

Many people aren’t focused. They spend time doing things that don’t lead to progress. For example, many companies spend millions on marketing but don’t improve their product. Musk says at Tesla, they never spent any money on advertising and focused all their energy on improving the product.

Many people aren’t focused. They spend time doing things that don’t lead to progress. For example, many companies spend millions on marketing but don’t improve their product. Musk says at Tesla, they never spent any money on advertising and focused all their energy on improving the product.

This is quite a revelation as it not only saves your time, energy, and money but also makes you move forward much faster. So take a stock of your work activities. See which activities don’t help you grow and nuke them off your schedule.