Stephen Hawking, the great physicist, is widely regarded as one of the finest minds on our planet. He was physically disabled by a motor neuron disease called ALS (amyotrophic lateral sclerosis) at the young age of 21. Still he took it in his stride and became the greatest physicist ever.

He has received numerous prestigious awards for his work on understanding the universe. While physicists struggled for decades to make sense of the relativity and quantum theories together, Hawking did it with his research on black holes. 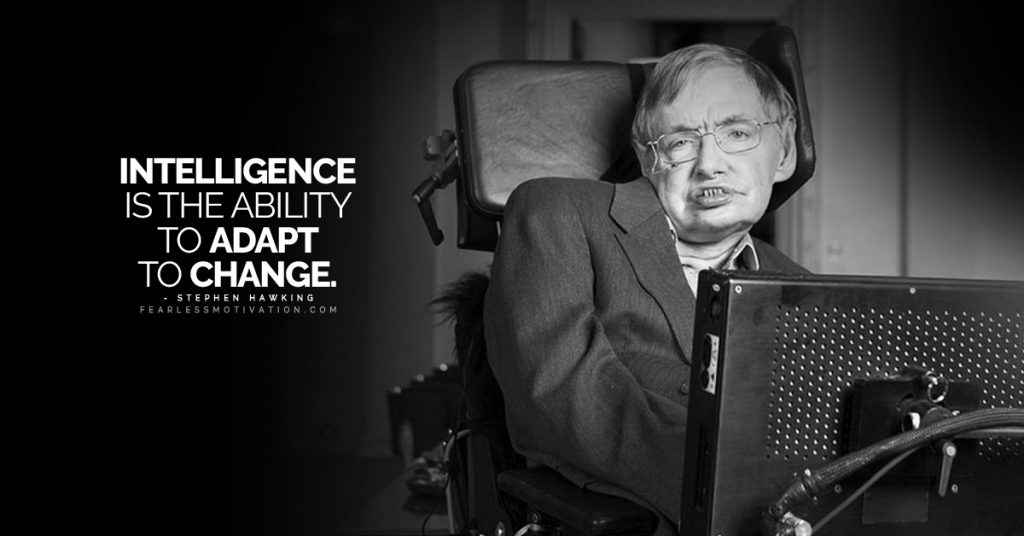 Let’s dive deep into perhaps the greatest mind of our times and learn life’s ultimate truths:

1. My advice to other disabled people would be, concentrate on things your disability doesn’t prevent you doing well, and don’t regret the things it interferes with. Don’t be disabled in spirit, as well as physically.

Life can knock you down. But you have to understand that you have the power to change your circumstances with the indomitable power of will. This is one of the most empowering Stephen Hawking quotes ever.

2. Intelligence is the ability to adapt to change.

3. I have noticed even people who claim everything is predestined, and that we can do nothing to change it, look before they cross the road.

4. My goal is simple. It is a complete understanding of the universe, why it is as it is and why it exists at all.

Know very clearly what you want to do. Keep things very simple. People often want to know the secret, but the secret is that there is no secret to a successful and fulfilling life. Know what you want very clearly, chase it every day and stay away from negativity.

5. We only have to look at ourselves to see how intelligent life might develop into something we wouldn’t want to meet.

We as human beings have the potential to create heaven on earth. But sadly, we’ve destroyed the natural climate on earth, created horrific things such as terrorism, corruption, physical and emotional abuse. Use your intelligence to do good.

6. People won’t have time for you if you are always angry or complaining.

If you are always whining, you are creating negativity in your life and it will pass onto others too. So the wisdom is in understanding that your life isn’t bad but your attitude is. So, make the change inside first and life will shift.

7. Life would be tragic if it weren’t funny.

No matter how hard you work, it is equally important to live and laugh with your family and friends. You can find the humor in anything. You’d be surprised to know that one of the biggest regrets old people have is that they didn’t spend enough time with friends and family.

Terrorists, corrupt politicians – all are operating on their “sound knowledge” of how life should be. But it is the illusion they’ve adopted as reality. Nations have bombed each other in the past because they “knew” that war is the only answer. Knowledge should bring prosperity and enlightenment. It dispels darkness and doesn’t propel it.

9. I am just a child who has never grown up. I still keep asking these ‘how’ and ‘why’ questions. Occasionally, I find an answer.

It’s the inner child in you that’s carrying you forward. Why? Because it’s the one who dreams and inspires you to chase something that matters to you. Don’t let your inner child, your sense of wonder die. This is one of the most inspiring Stephen Hawking quotes ever.

Science is based on logical reasoning and religion is based on faith, and sometimes blind faith. It’s good to have faith, but you must be rational too. For example, because of religion, terrorists are destroying the world. If they think rationally, no God can ever allow a man to rape or kill an innocent human being. 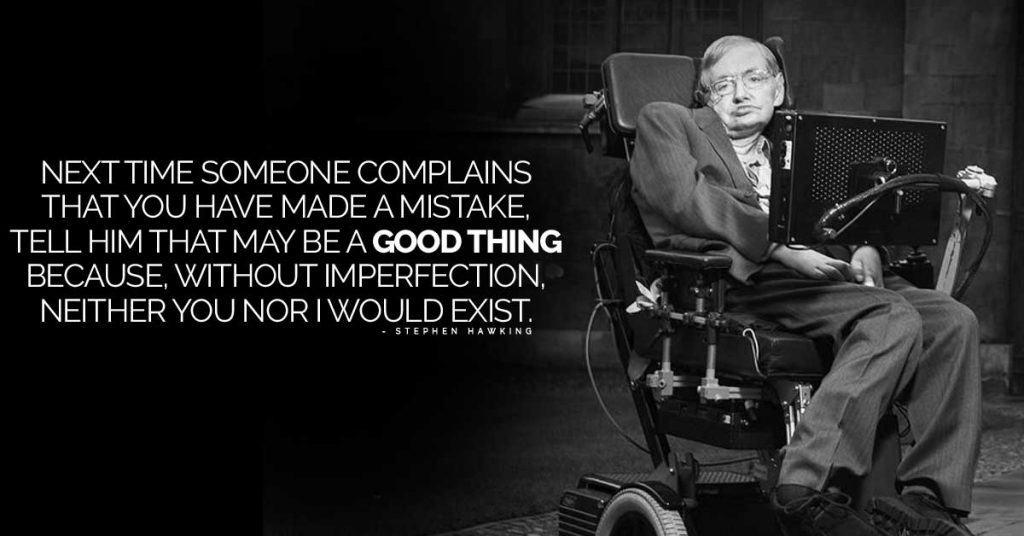 11. Next time someone complains that you have made a mistake, tell him that may be a good thing. Because without imperfection, neither you nor I would exist.

Learning to live life is like learning to ride a bicycle. You are bound to fall down the bicycle in the beginning, but that doesn’t mean you are unfit to ride.

12. [Giving advice to his children] “One, remember to look up at the stars and not down at your feet. Two, never give up work. Work gives you meaning and purpose and life is empty without it. Three, if you are lucky enough to find love, remember it is there and don’t throw it away.”

Always have a vision for the future, don’t live in the past. When you’re chasing a compelling goal, the past won’t matter. Also, take pleasure in your work. In the end, all that will matter is how you served the world, how your life mattered. Your work is a means of service. This is one of the most powerful Stephen Hawking quotes ever.

13. Silent people have the loudest minds.

People who speak less think more. Some people’s gifts are more visible than the others, don’t let this fool you.

Everyone is living on hope, it is the most addictive drug. We are all living in the hope that life will get better and we have the power to dictate our future. But hope, unlike real drugs, can help you accomplish great things.

15. The universe doesn’t behave according to our preconceived ideas. It continues to surprise us.

Time and again we see people doing unimaginable things. Think of Tesla, SpaceX, Uber, Instagram, the internet, global warming, Tsunami. The world will always surprise us, our responsibility is to adapt with it.

16. It is no good getting furious if you get stuck.

If you are angry because you’re not making progress, you’re just draining your energy. Take a step back and use your energy for positive action instead. This is one of the most empowering Stephen Hawking quotes ever.

17. Consideration of black holes would suggest that God not only plays dice, but also throws them where they cannot be seen.

Sometimes the greatest gifts of life are hidden in the most unexpected places and moments. So if your opportunities are not visible yet, stay put and have faith. Life can change any moment.

18. Try to make sense of what you see and wonder about what makes the universe exist. Be curious, and however difficult life may seem, there is always something you can do, and succeed at. It matters that you don’t just give up.

According to a great spiritual guru Sadhguru, “The source of creation is functioning within you”. If what creates the world is inside you, external circumstances are much less powerful than you. So use that inner power to create a wonderful life.

19. To confine our attention to terrestrial matters would be to limit the human spirit.

As it turns out, sky isn’t the limit. There is no limit to human potential. Sure, you can’t be an actor, writer, engineer, comedian and astronaut all at once. But you can become extraordinary in your chosen field. This is one of the most beautiful Stephen Hawking quotes ever.

20. We are just an advanced breed of monkeys on a minor planet of a very average star. But we can understand the Universe. That makes us something very special.

There are many species on planet earth. But what distinguishes us is we are at a higher level of consciousness than others. We can influence life and deeply understand it. We can turn problems into opportunities, dream into reality, darkness into light. Become aware of this power that dwells within you.