Morgan Freeman is a world renowned actor, producer, and narrator. His film, the Shawshank Redemption, ranks number one on IMDB’s list of top 250 films of all time. He is especially known for his deep, low-pitched voice which is instantly recognisable around the world.

But the road to success wasn’t always smooth for Freeman. He has lived on the street and worked in some undesirable jobs before becoming a successful actor. As an actor Morgan Freeman didn’t reach real success until his 50’s. His story is one of perseverance and belief..

1. I have to remind myself that some birds aren’t meant to be caged. Their feathers are just too bright. And when they fly away the part of you that knows it was a win to lock them up does rejoice.

Sometimes we tend to be possessive with people as we are with things. But some people are free birds and won’t settle inside a cage no matter how hard we try. And to see them fly, is the most captivating sight. 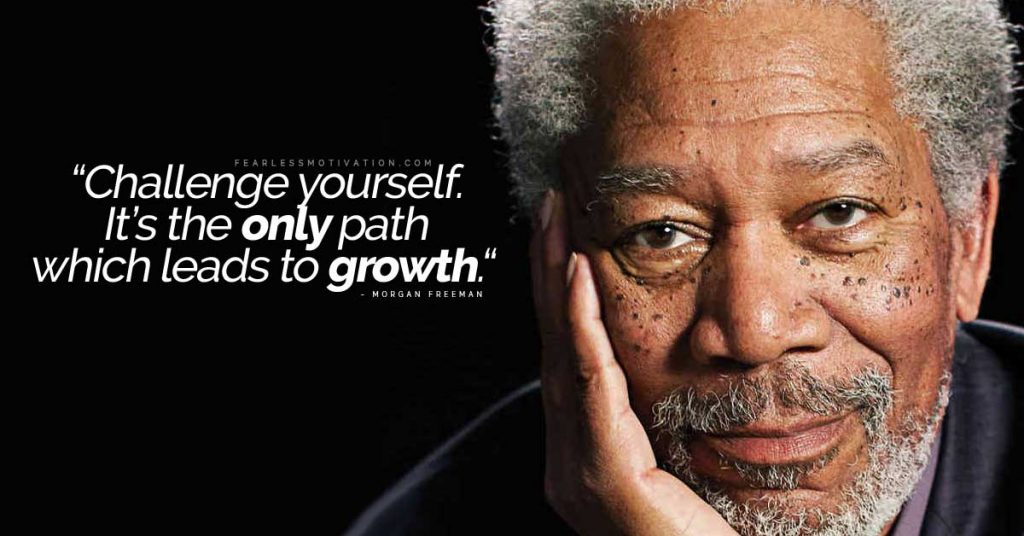 2. Don’t be different just for different’s sake. If you see it differently, function that way. Follow your own muse, always.  – Morgan Freeman Quotes

Follow you heart. Become aware of what makes you tick and do it regardless of what others are doing.

3. I don’t have to work. I could stop and never have to worry about paying the rent. I’m working for the joy of doing it.

The irony of life is that when you stop working for money and instead work for the joy of working itself, that is when abundance in all forms comes to you. The secret is to do what you love.

4. Very often, you know, you stop walking because you say, ‘Well, I’m tired of climbing this hill. I’m never going to get to the top.’ And you’re only two steps from the top.

People give up when they face multiple setbacks one after the other. We have to realize that failure is the stepping stone to success, not the end of our journey.

5. Challenge yourself; it’s the only path which leads to growth. – Morgan Freeman Quotes

Some people never work hard yet believe that they are worthy because someone admired them for their talent twenty years ago. It’s not about who you were, it’s about who you are.

7. One of the things you can always depend on – this is one of the truths of the universe, and you heard it first from here – whatever we decide we want to do is what we do.  – Morgan Freeman Quotes

What we do doesn’t depend on our circumstances, but our own decisions. The lesson here is that you have the free will to steer your life in the direction you want. You aren’t the product of your circumstances, it’s the other way around.

8. If you look back on your life and where you started from it’s like looking back down a mountain back to the desert floor. It’s like now I can’t believe I had whatever it takes or perceived whatever it took to get here.

Morgan Freeman became a top Hollywood actor, yet he can’t believe what he accomplished. It shows that you have far more potential than you think you have.

9. How do we change the world? One random act of kindness at a time.

Small goals hold much more power than you think they do. If you want to change the world, do a small gesture today. Real power lies in the present.

10. I always tell my kids if you lay down, people will step over you. But if you keep scrambling, if you keep going, someone will always, always give you a hand. Always. But you gotta keep dancing, you gotta keep your feet moving.

To find your balance in life, you need to keep moving. When you help yourself and work hard, help will come from sources that were unknown to you.

11. Was I always going to be here? No I was not. I was going to be homeless at one time, a taxi driver, truck driver, or any kind of job that would get me a crust of bread. You never know what’s going to happen.

Morgan Freeman wasn’t always successful. In fact, he lived on the streets and worked menial jobs before he became an actor. The lesson is that you never know when life can turn around. So keep working on your dreams.

12. The best way to guarantee a loss is to quit.

If you really want something, the only thing that can stop you from succeeding is you. Steve Jobs believed that perseverance accounts for half of what separates the successful entrepreneurs from the non-successful ones.

13. Insanity is coasting through life in a miserable existence when you have a caged lion locked inside and the key to release it.

What good are your wings if you have never learned how to fly? Most people live lives of quiet desperation. They just exist because they fear failure too much.

14. The highest power is the human mind. That’s where God came from and my belief in God is my belief in myself.

Everything is cultivated in the mind before it is manifested in reality. Take control of your mind and you’ll be able to achieve great things in life.

15. You measure yourself by the people who measure themselves by you. – Morgan Freeman Quotes

As Jim Carrey says, the most valuable currency in this world is the impact you have on other people.

16. I’m not intimidated by lead roles. I’m better in them. I don’t feel pressure. I feel released at times like that. That’s what I’m born to do.

When you push yourself to grow, what felt tough becomes the new normal. Always keep pushing, keep raising your standards.

17. I once heard a wise man say there are no perfect men. Only perfect intentions.

Nobody is perfect. Even Michael Jordan, the numero uno player in basketball, has lost over 300 games and missed over 9000 shots in his career. But his intention was perfect – to become an extraordinary basketball player.

18. Learning how to be still, to really be still and let life happen – that stillness becomes a radiance.

Most people ride on the rollercoaster of life 24×7 and never step out of it. Everything is on autopilot. But if we really become present in the moment and still our minds, we’ll find true joy.

19. We humans are more concerned with having than with being.  – Morgan Freeman Quotes

Owning things never brings happiness. Find joy in being. Look around and appreciate the little things – the morning sky, wind blowing on your face, the sound of birds chirping.

20. If you live a life of make-believe, your life isn’t worth anything until you do something that does challenge your reality.

The best moments in life are the ones when we overcome challenges. Because it’s then that we realize how powerful we really are.