Steve Harvey is an American comedian, TV host, actor, and author. He started as a stand-up comedian, but got his big break as the host of the TV show Showtime at the Apollo.

He was one of the four comedians who were featured in the film The Original Kings of Comedy. He has been the host of other popular shows such as Family Feud and Steve Harvey.

Steve comes from humble beginnings — growing up in the hood, and working as a carpet cleaner, a mailman and a salesman, before becoming a stand-up comedian.

Since he learnt everything about survival and success the hard way, there’s a lot to learn from him. Here are the most inspirational Steve Harvey quotes and top 10 rules for success.

1. If you want to be successful you have to jump, there’s no way around it.  If you’re safe, you’ll never soar. – Steve Harvey

You can never achieve anything worthwhile living in your comfort zone. Only when we face challenges, we shed our old skin and become stronger.

2. A person has to remember that the road to success is always under construction.  You have to get that through your head.  That it is not easy becoming successful.” – Steve Harvey Quotes

We are all works under progress. Success is never easy, but it is always worth the effort.

3. Procrastination will delay your change!  Today is a very good day to change; don’t let you stop yourself from growing. – Steve Harvey

The biggest enemy is within. Don’t procrastinate, don’t second guess, don’t overthink, don’t ask for permission. Do, be, and get what you want!

4. God lets you be successful because he trusts you that you will do the right thing with it.  Now, does he get disappointed often?  All the time, because people get there and they forget how they got it. – Steve Harvey Quotes

Be loyal to your calling, your purpose. Once you become successful, don’t stop helping people, keep practicing your craft,  and keep growing!

Don’t get overawed by the lure of money. Money is just a by-product of helping people with your gift. Focus on the mission, not the money.

6. You are never too old to reinvent yourself. – Steve Harvey Quotes

Age is just a number. You are as young or as old as your dreams.

If you are stuck in the past, you cannot focus on the present or achieve your goals in the future. Draw a line in your mind and start each day with a clean slate.

8. He’s an honest man who does what he says. – Steve Harvey

Integrity is very important. Speak and act in alignment with your values and you’ll always be happy.

9. Forgiveness is for you. It does more for you than the other person. – Steve Harvey Quotes

Hating someone puts you in a cage. Forgiving them releases you from it.

With success your light shines bright and people feel happy to have you in their lives. And when you’re down and miserable, only a few are willing to be with you and guide you with their light, they are your true friends.

You have a gift and the more you share it with others, the more abundance comes to you.

12. Do not ignore the passion that burns in you. Spend time to discover your gift. – Steve Harvey Quotes

Take the time to know your creative abilities and use them to do something extraordinary. Life is too short to work for someone else’s dream.

13. Catch fire today! Make today the day you stop complaining and do something. – Steve Harvey Quotes

14. What you want out of life is the thing you have to give the most of. – Steve Harvey Quotes

If you want love, give love first. Want respect? Give respect. Want abundance and growth? Help others flourish in some way first.

15. I aim for stuff so big, that the dream is bigger than the fear. – Steve Harvey Quotes

Everyone feels fear. But when your dream is far more bigger and important, that’s when you find the courage to chase your dream. 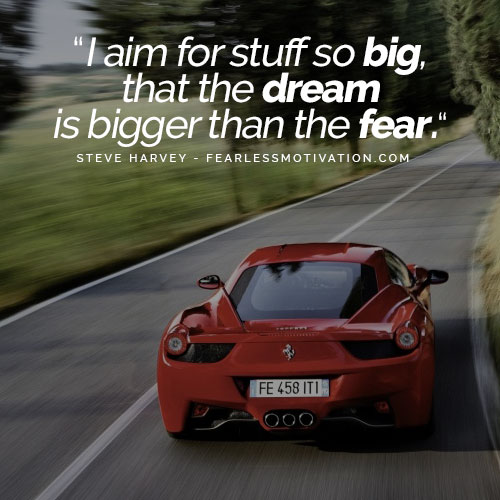 16. People don’t like to hear the truth out here because the truth makes them think. – Steve Harvey Quotes

Some people just want to hear things that go with their beliefs, things that make them feel comfortable. Face the truth if you want to grow.

17. My calling is to help people, to teach people, to share with people, until I die.  I can never stop doing that.  I can’t, and I don’t want to. – Steve Harvey Quotes

As Denzel Washington says, “True desire in the heart for anything good, is God’s proof to you sent beforehand to indicate that it’s yours already”. You can never numb that desire, only fulfill it because it’s for the collective good.

18. The most successful people in this world recognize that taking chances to get what they want is much more productive than sitting around being too scared to take a shot. – Steve Harvey Quotes

Some people choose safety over risks. But to grow in life, we need to go into uncharted territories to learn, grow, and develop ourselves.

19. Your reality is yours. Stop wasting time looking at someone else’s reality while doing nothing about yours. – Steve Harvey Quotes

Stop obsessing over others’ lives. If you are always thinking about how better off or worse off others are, you’ll never be able to focus on your own goals.

The mind is an amazing thing. When tamed, it can help you realize your own greatness. And when left untamed, it can make you miserable even when you have everything.

21. Your mission, your purpose and your destiny will all be tied to one thing, your gift. – Steve Harvey Quotes

Your creativity will help you get everything you want in life. So take the time to build your skills to an extraordinary level.  Because until you help others, you won’t ever succeed.

Find how you can help the world with your talents. Can you make people laugh? Can you amaze them with your art? Are you a tenacious entrepreneur who gives birth to new ideas and isn’t scared of failure?

Find your masterpiece, the life you were meant to live, by looking inside yourself. Let go of any fears and doubts that you have, let go of the negative self-dialogue and go after your most courageous vision one step at a time!

It’s okay to fail as long as you learn from your failures.  No person in this world has succeeded all the time in their endeavours. Even the best of the best fail, in fact they have failed more than the unsuccessful have even tried.

If you are scared of failure, you will never try anything new. Albert Einstein was considered a failure at an early age because he didn’t speak until he was four years old. His teachers thought that he would never do something significant, yet he shook the entire world with his genius.

3. Push Through The Dirt

Steve Harvey says that, “Dirt is necessary for growth and development, dirt builds character.” Only when we face challenges do we use our strengths and develop them further. Without challenges, life would be a boring mess.

“Everything that blossoms and grows and is beautiful, was underground at one time.” We have to face the darkness, the problems, the setbacks in order to create something fruitful and worthwhile.

Steve Harvey says that we often dream about making millions of dollars, but the secret to success lies in multiplying your effort.

This means that you don’t need a $1 million idea. Just take a $10 idea and put in 10 times the effort you made to create the $10 idea. Now you have $100. Keep multiplying your effort 10 times, one step at a time, and soon you’ll have a million dollars.

The lesson here is that we should focus on small steps. Perfection can become our enemy and scare us into not taking action.

5. Surround Yourself With Like-Minded People

Team up with people who share common goals and core values. Some people pull us down and hamper our progress. But the right people lift us up and push us towards our goals.

Steve Harvey says that some people exist in our life but contribute nothing, have no value. When people give you no value, they waste your time and energy. So get rid of such people.

Complement your strengths and skills with someone else’s and bring them on your team. For example, if someone is good at creating new ideas and you are good at executing them, you could build a powerful business.

Steve Harvey says that you don’t need to do everything by yourself. It’s okay to ask for help. People are always willing to share knowledge. Without sharing, knowledge is of no use.

7. Balance Between Flexibility and Focus

Steve Harvey says, “You have to put your blinders on and say ‘I’m laser beam focused on this’. But the road to success is always under construction. When you strike out on your goal, you’re going to have to get ready for flexibility. Because there’s going to be detours, pitfalls, stop signs, men working, or delays. Detours – that has to be expected.”

Focus is essential when you want to achieve anything. But sometimes your strategy might not work, and that’s when you need to take a different path with the same focus, the same intensity.

8. Jump off The Cliff of Your Comfort Zone

If you have a dream, you need to take that leap of faith and go all in on your dreams. You can keep standing on the proverbial cliff and watch other people jump, take the risk, and grow to a new level in the process.

Or you can trust your intuition, trust that the parachute will open, not immediately, but definitely. Life is not worth living in the cage named ‘comfort zone’.

9. Dream Bigger Than Your Fears

Many people never truly start their journey because of fear of failure. You need something which is bigger than your fears. You need to dream bigger.

It also applies to our dreams. Dream so big that it puts fire in your belly and doesn’t let you procrastinate or sit back because of fear.

10. Use Your Emotions to Fuel Yourself

Steve Harvey comes from humble beginnings – as a child, he was raised on a farm. And it was the work ethic he developed on the farm that made him the successful man he is today.

On his birthday, his hometown block was named Steve Harvey way, and it made him break into tears. This shows that you need to be driven by emotions.

Showing emotions is not weakness. Deep emotions – such as feeling protective for your family, or feeling a burning desire to prove yourself – can drive a person to do extraordinary things in this world.