Ellen Degeneres has become a global superstar in recent years, but it wasn’t all plain sailing for Ellen. Born in Louisiana in 1958 she spent most of her youth working odds jobs waitressing, bartending and working in retail. Having a passion for entertaining people she starting doing comedy shows in front of small audiences at coffee houses and clubs, slowly gaining recognition until she began to tour nationally in the early 80’s. Her Film & TV career started slowly too, making a few appearances in small budget shows before they were promptly cancelled, her biggest break came when she started on the sitcom These Friends Of Mine which was renamed Ellen after the first season.

Sadly a lot of the press she received was negative. Ellen was verbally attacked by many, at times she carried the weight of a nation on her shoulders as she was pressured from all sides on the intricacies of her stance.

The courage Ellen displayed during this period gained her immense respect and she managed to re-educate many who had archaic views on basic human rights. The good and bad publicity she received during this ordeal catapulted her to a new level of global recognition.

The following season the shows ratings went down and the show was cancelled by the Walt Disney company, it is alleged they were worried about the subject matter on the show, as LGBT rights were such a volatile topic during the 1980’s.

Ellen went on to start another sitcom The Ellen Show but it was unable to attract strong ratings and was cancelled after 13 episodes. Refusing to give up on her dream, Ellen came back with day time talk show The Ellen Degeneres Show in September 2003. As you may know the show was a huge success and continues to be one of the most successful talk shows year after year.

Despite the setbacks she faced, Ellen’s passion and power of positivity. Saw her try again and again even when things didn’t work out. A lot of people would of given up, but Ellen shows us that if you want something bad enough, you’ll find a way.

“It is failure that gives you the proper perspective on success.”

“I think beauty comes from actually knowing who you are. That’s real beauty to me.”

“It’s our challenges and obstacles that give us layers of depth and make us interesting. Are they fun when they happen? No. But they are what make us unique.”

“Find out who you are and be that person. Find that truth, live that truth, and everything else will come.” 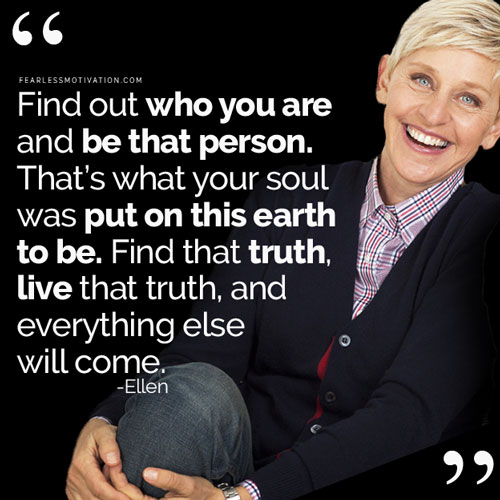 “It’s hard to understand failure when you’re going through it, but in the grand scheme of things, it’s good to fall down – not because you’re drunk and not near stairs.”

“While I was doing stand-up, I thought I knew for sure that success meant getting everyone to like me. So I became whoever I thought people wanted me to be. I’d say yes when I wanted to say no.”

“If someone ever says you’re weird say thank you.” – Ellen Degeneres Quotes 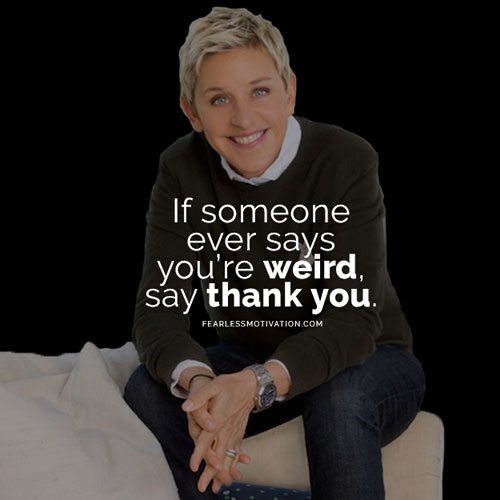 “I learned compassion from being discriminated against. Everything bad that ever happened to me has taught me compassion.” – Ellen Degeneres Quotes

“The truth is we are all connected. We are all from the same exact molecules.

“If someone ever says you’re weird say thank you.” – Ellen Degeneres Quotes

“Though you feel like your not where you’re suppose to be, you shouldn’t worry because the next turn you take, it will lead you to where you wanna go.”

“You just have to keep driving down the road. It’s going to bend and curve and you’ll speed up and slow down, but the road keeps going.”

“Do things that make you happy within the confines of the legal system.” – Ellen Degeneres Quotes

“You have to stay in shape. My grandmother, she started walking five miles a day when she was 60. She’s 97 today and we don’t know where the hell she is.”

“Be open to learning new lessons, even if they contradict the lessons you learned yesterday.”