Tom Bilyeu teaches us about the importance of self-worth in these 3 powerful speeches.

Transcript: WHAT IS THE MOST YOU CAN BEAR? – Tom Bilyeu

Humans are capable of truly unbelievable things. But the reality is the way that we get better, is by going through a simple process of adaptation. But what triggers the adaptation is stressors. It’s doing things that are difficult. It’s pushing yourself into a state of adapt or die.

The body wants to conserve energy, so unless you put yourself in the state where the body absolutely feels like to survive, it must adapt, you’re never going to change. And that’s why only the most elite people, end up achieving at the highest level, because they take the time to shape themselves.

And when your fascination becomes that, when you start wondering just how much am I capable of? And every level that you achieve excites you to push harder, and go farther, and do more, and bear more weight. Then, all of the sudden you really can begin to surpass other people, but it takes that, it takes a total shift of your mindset.

At the end of the day, nobody sat their way to greatness. Nobody sat back and relaxed and became extraordinary. The only people who really achieve, the only way that humans are able to do the extraordinary things that we’re able to do is by going to that breaking point and then beyond.

So you’ve got to construct a story about, not only who you are, but what you can become. And when that narrative is so compelling, that it pushes you forward, then you will have the kind of change that you want in your life. But first, you have to believe that you can do it. You’ve got to put yourself out there. You’ve got to grind and work. But to do that, to work that hard, to make those kinds of changes, you’ve got to be willing to test yourself.

You can’t pretend. You’ve gotta really look at your results and see if you’re making the progress that you want to make. And that’s where a lot of people fail. They lie to themselves, they want to get away with something. They want to see if anybody’s looking,

but the reality is the only thing that matters in this life, what do you think about yourself, when you’re by yourself?

When things get difficult to know what you want and to stay that course even when everything else is trying to knock you off. So build that thing, build that thing in your life. Build that belief, know that you can do it, and be willing to go through hell to get to the other side. To get to the person that you were always meant to be. It won’t be easy, but it sure as hell is possible. 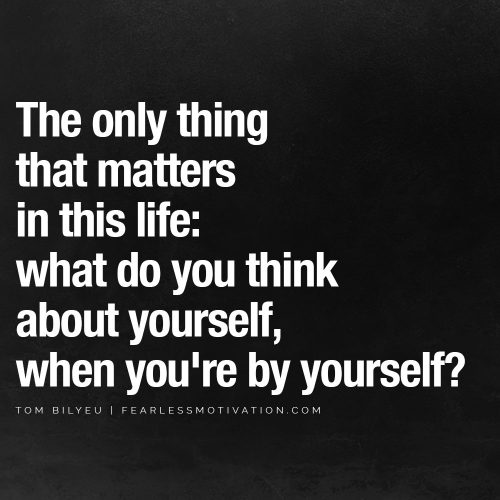 Transcript: YOU CAN CHANGE – Tom Bilyeu

We all need a word of encouragement from time to time, so I want this to be that word. So, let me tell you what I know.

You can change, no matter what you think of yourself. Humans are designed to change. That’s what we do. But you have to put yourself underneath tremendous stress in order to trigger that adaptation response.

But if you know what direction you want to move in, if you know what you want to become, you can change into that. And so, holding onto the fears and the doubts and the worries, they’re not serving you. And looping around that mentally and wondering if you’re going to make it and practicing mentally how you’re gonna deal with the failure, how you would justify it to people, all of that is stopping you from doing the one thing that actually will work.

Trying, practicing, training, falling down. Those are the very things you need to do, the very simple act of taking action. That’s the thing that you have to focus on. If you do that, then you’ll be able to trigger your ability to change.

So, I don’t need you to believe that you’re capable of something extraordinary now, and I know in your heart you have that dream, you have that small flicker of a belief that you can do it. That if you just try, that you could figure it out, and that’s what I want you to focus on.

You could figure it out. Not that you already know how to do it. I fully accept that you don’t. I fully accept that most of the things that I want to do with my life and will go onto do, I’m not yet capable of but I so believe in the human ability to change. Not even something that’s unique to myself, just the human ability to change. That if I simply walk that path of doing, of trying, of failing, and learning, that on a long enough timeline, I will win. So, whatever it is that you’re thinking about doing right now, I want to be that voice in your head that says you can do it. Maybe not today but you can do it.

So go out right now, stop this, stop listening to this, stop whatever you’re doing, and get out there and try. Do it and remember that it is a process of adaptation and to go through that process you must get under stress. It’s the only way that you’ll grow but you can do it. You can grow, you can become whatever you want.

Transcript: BUILD YOUR WORTH – Tom Bilyeu

No one will ever hate you with the intensity that you can hate yourself, and that’s why you absolutely must take the time to build your self-worth.

And I really wish that building your self-worth was simply as easy as repeating to yourself that you love yourself, but it’s not. The reality is if you want to love yourself you have to do something that is worthy of that love.

The reality is we’re all watching ourselves all the time. We know how we behave. And so you really have to think about that. I want it to be enough. I want it to be enough that you exist and that you’re going to be okay simply because you are. But the reality is we don’t look at life like that and we do judge ourselves and we do think about whether or not we’re following through on the things that we said we were going to do.

And once you’re willing to commit to it, to put in the energy every day to get up and pursue that thing, and again this is not me, I’m not judging you, I can really tell you, I love you and it’s enough that you just exist. But I know that in your head, in all of our heads, is a voice that says that just isn’t true.

And so to connect with ourselves and to find that meaning and to develop it, to create meaning in our lives, we have to set an intention and we have to pursue that intention.

Start small, know what you want, get out of bed, get after it, set rules for yourself, follow those rules.

Once you start doing those simple things, and again they don’t have to be big, but once you start setting a rule, having an intention, following your rules, building towards that intention, suddenly you’re going to earn that credibility with yourself.

And then all of the sudden no matter what anybody says to you, and they are going to say negative things, haters are going to come after you, that is just a reality of life, but you will be impervious to that if you have built within you belief, belief that you are worthy because you take small steps every day to do something that means something to you.

It doesn’t matter what other people think but it matters a lot what you think about yourself, so every day earn that worth. 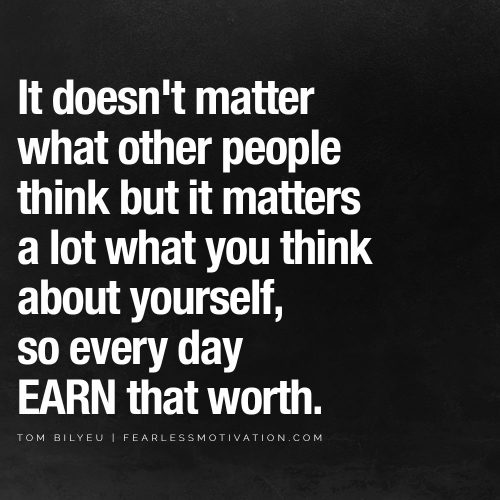 It doesn't matter what other people think but it matters a lot what you think about yourself, so every day earn that worth. Click to Tweet