They blame an event or something that happened in the PAST… They blame everyone … but themselves.

They blame every-thing… but their own choices.

If you want a better quality life… If you want better RESULTS in your life… don’t blame the system… BEAT the system.

Most people would agree the education system needs to be fixed… but still, there’s a great difference in RESULTS and achievements from even within the same schools.

Most people aren’t where they want to be… but there are SOME people who have EXCEEDED their potential… and EXCEEDED all expectations. Same schools, different results.  One uses the system as an excuse, one succeeds despite it.

It’s not the EDUCATION in school that determines our destiny… it’s the education in LIFE. It’s the self-education and self- awareness that happens AFTER school.

LIFE doesn’t end after school, and nor should your desire to LEARN and GROW more.

Most of us have parents who… while wanting only the best for us, don’t truly understand the path we want to follow. Some blame their parents for holding them back… Some push on and succeed regardless. Don’t blame the system… BEAT the system.

But there are a small amount of people… let’s call them the minority… who ignore the government and focus on improving themselves! What a concept!

It’s not anyone else’s fault you are where you are in life. You are the one who decides what to do with your life, regardless of what “happens”

Rather than complain and blame…
LEARN and GROW.
Rather than focus on the negative…
Think about how you can create more positive in your own life… through your own SELF-WORK. 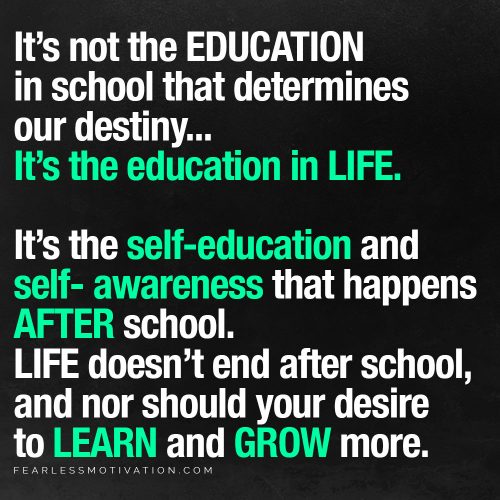