Show the world you are not like the rest. Push yourself to become your very best. Most people accept the average existence handed down to them by generations of uninspired role models. Make sure in your family, in your circle it stops with YOU! You are different and you will show everyone that greatness, happiness and abundance is not only possible, it is very achievable! Don’t TALK about it – SHOW everyone when you make it.

Not Like The Rest – Motivational Video by Fearless Motivation

Not Like The Rest (Motivational Video) by Fearless Motivation – WATCH FREE:

Transcript – Not Like The Rest – Motivational Video | Fearless Motivation

Most people give up too easy.
Most people are ready to throw in the towel when things get tough.
Most people stop chasing their dreams because of fear.

You heard what I said, I said most people… not YOU!
YOU never give up when times get tough.
YOU will keep on going even If the odds are stacked against you.
That’s what makes you special!
That’s what makes YOU a CHAMPION!

I’ve never heard of a champion giving up when times get tough.
Champions keep on going until they get the victory.
That’s a champion’s mindset.

Not EVERYONE becomes a CHAMPION,
ONLY those with a BURNING DESIRE and a huge passion for what they do are the ones who gets the title.

There’s a lot of people who started with nothing but ended up with everything.  If they can do it, WHY can’t you?

IF YOU HAVE TO:  FAKE IT UNTIL YOU MAKE IT!
Soon you won’t have to FAKE IT
Because after HARD WORK: you MAKE IT.!
After the struggle: YOU MAKE IT !
After you STICK IT OUT… YOU MAKE IT!

Most people don’t go after what they want because of fear of success or fear of failure.
Remember that you only get one chance in life,  make sure It’s unforgettable!

NOT LIKE THE REST.  CAME to push myself . Put myself to the TEST . PUSH MYSELF to be THE BEST!
WILL NEVER ACCEPT ANYTHING LESS!

Got only ONE SHOT!
You think i’m going to waste it?!
NO CHANCE !
STRAIGHT TO THE TOP ! WILL NOT STOP!  CAN NOT STOP!  Push till i drop!

The champion doesn’t care for your hate ’cause the champion is WORKING
WORKING on becoming GREAT    ! 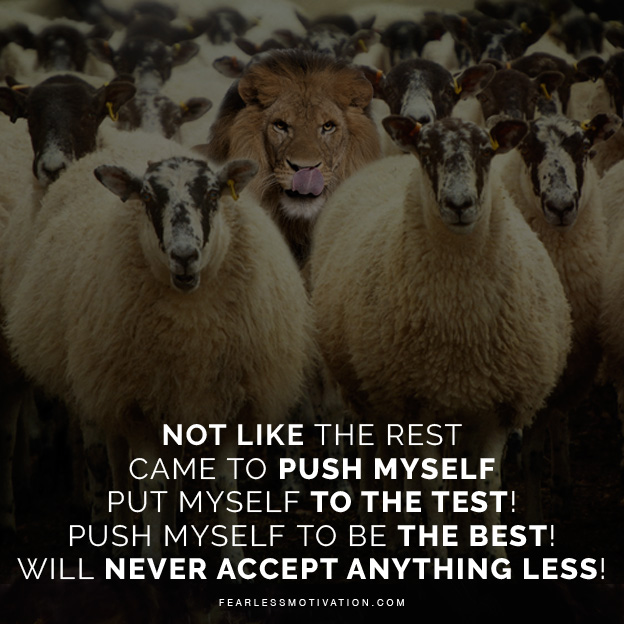