15 Most Powerful Martin Luther King Quotes on Freedom and Peace

Martin Luther King Jr. is famous for his “I have a dream” speech.

He was a social activist and a prominent leader of the Civil Rights Movement in America. He played an integral role in removing the segregation of African Americans in South America. For his distinguished efforts and achievements, he was awarded with the Nobel Peace Prize in 1964.

Here are the 15 most powerful Martin Luther King quotes on freedom and peace.

We live in a materialistic society – a big house, a flashy car, money to spend on holidays in exotic locations – these are the things that most people want. But if we focus more on people and less on things, the world will become a more peaceful place.

2. We have flown the air like birds and swum the sea like fishes, but have yet to learn the simple act of walking the earth like brothers.

We have created powerful technology to traverse the skies and travel the depths of the ocean, but we’ve forgotten the simple human traits of empathy and compassion. This is one of the simplest yet most profound Martin Luther King quotes. 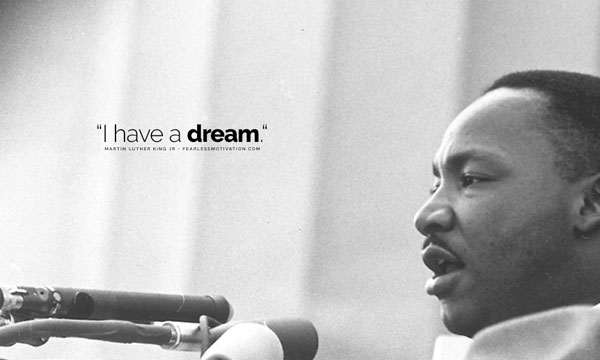 3. Of all the forms of inequality, injustice in health care is the most shocking and inhumane.

Injustice in healthcare shows that government really doesn’t care if poor people die. This shows the unfortunate state of the world that we live in.

Whatever circumstances life throws at you, you can get through it all if you just keep moving forward.

5. If I cannot do great things, I can do small things in a great way.

From small things big things grown. Instead of focusing on a large task you cannot do like running a company. Instead learn the small things and master them. For example if you were in the payroll department, master that department and become the best there is, once you feel like you have mastered it take the leap into a new challenge and go again.

6. An individual has not started living until he can rise above the narrow confines of his individualistic concerns to the broader concerns of all humanity.

The most successful people are driven by a mission greater than themselves. For example, Elon Musk wants to expand the scope and scale of human consciousness with his work. Chase a personal mission, not money for the most growth.

7. I have decided to stick to love. Hate is too great a burden to bear.

When you hate others, you only end up hurting yourself. Because you’re creating strong negative emotions in your body which won’t affect the person you’re hating, but will surely affect you.

You cannot solve a problem with anger or hatred. It takes empathy, patience, and compassion to overcome anger, hatred, and resentment. This is one of the most insightful Martin Luther King quotes ever.

9. I have a dream that my four little children will one day live in a nation where they will not be judged by the color of their skin but by the content of their character.

People shouldn’t be judge by their skin color, clothes, cars, or other materialistic symbols. If you are going to judge someone, judge them by their character, by their actions. 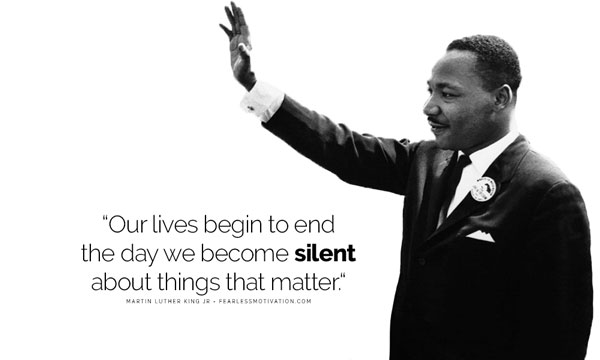 10. Our lives begin to end the day we become silent about things that matter.

When you identify something that needs to be changed, it’s your duty to speak up and do something about it. When we tolerate injustice, we get more injustice in our lives.

11. In the end, we will remember not the words of our enemies, but the silence of our friends

What hurts more than the words of our enemies is the silence of our friends, when our friends can see us being put down, it’s the most horrible thing to experience. Remember you are the average of your 5 closest friends. Make sure they have good character.

When it’s easy, everybody can go after it and get it. But when it’s hard, that’s when your character gets tested. Character is shaped and tested in times of adversity. This is one of the most powerful Martin Luther King quotes as it depicts the importance of adversity.

13. Intelligence plus character—that is the goal of true education.

Education should empower people, help them envision a better future and give them the courage to chase it. It should build our character and give us the intelligence to not only survive but flourish.

14. We know through painful experience that freedom is never voluntarily given by the oppressor, it must be demanded by the oppressed.

No oppressor ever transforms and shows empathy toward his target. The victim has to draw a line himself and firmly let the oppressor know that any disrespectful behavior won’t be tolerated.

15. Faith is taking the first step even when you can’t see the whole staircase.

Faith is a powerful tool that can propel you to become the person you want to be. When you believe in yourself, you are unstoppable because no roadblock can break your faith.