Actresses have to wear other people’s skins every time they play a part. As a result, they often have more perspective than most. Here we have collected some of most insightful quotes from famous actresses

When you spend your life putting on different personalities, perspectives and character traits like the rest of us put on summer hats that will inevitably give you deep insight into  human nature. For this reason a lot of actresses have said some pretty insightful things about what motivates us, what drives us and about the demons which darken our doorstep.

In order to share their wisdom, here I’ve collected together some of the quotes which I found the most interesting, both because they lifted me up and changed the way I saw things.

“You often meet your fate on the road you take to avoid it.” – Goldie Hawn

A great quote. It doesn’t matter whether you believe in fate or not. For if you do, then the quote chimes with the idea that you can’t avoid it. And if you don’t, then it talks about how even if it is all down to chance, you still won’t know what curve balls life will throw your way. So don’t let it all stress you out too much!

Hardship is the crucible through which we make or break ourselves. Character is that which determines whether we’re remade or stay broken.

And this is how you develop character. By remembering that no action stands in isolation and everybody goes into the mixture that is your soul – good or bad, seen or not.

“You’re only human. You live once and life is wonderful, so eat the damned red velvet cupcake.” – Emma Stone – Quotes From Famous Actresses

And while you’re eating, make sure that’s all you’re doing. Because if you’re also watching TV, or playing with your phone, or stressing out about tomorrow’s exam, well then what will you remember about that cupcake?

And you’re only too old when you decide you are.

“If you know you’re going to fail, then fail gloriously!” – Cate Blachett  – Quotes From Famous Actresses

We have this weird relationship with failure. We treat it as the worst thing in the world. But it isn’t. The worst thing is not trying. From failure you can learn a lot, but from not trying you’re not going to learn anything.

“Nothing is impossible, the word itself says, ‘I’m possible.” – Audrey Hepburn

Of course, it might not always say ‘I’m easy’. But then, those things that we see as great accomplishments are rarely easy.

We need to take responsibility for our own lives. Sure, you might get lucky and find somebody who will support you and stand by you no matter what. But you also might not get that lucky. And if that’s the case, then you might end up waiting for somebody who never comes. Better to learn to care for yourself. Then you’ll get far no matter who stands beside you.

“To be brave is to love somebody unconditionally, without expecting anything in return. To just give. That takes courage, because we don’t want to fall on our faces or leave ourselves open to hurt.” – Madonna

To just give is the hardest thing in the world. And yet it is also one of the greatest ways to make yourself happy. When it’s not an exchange, when it’s not about some return favor down the road, when you can avoid turning it into a transaction, then you can raise yourself above it all.

“The thing women still have to learn is that nobody gives you power. You just take it.” Rosanne Barr

Admittedly, it sounds so aggressive. Perhaps that’s why men have traditionally found it easier to do. Nonetheless, if we ever want to get ahead then we have to accept Rosanne’s wisdom and take what we’re owed. 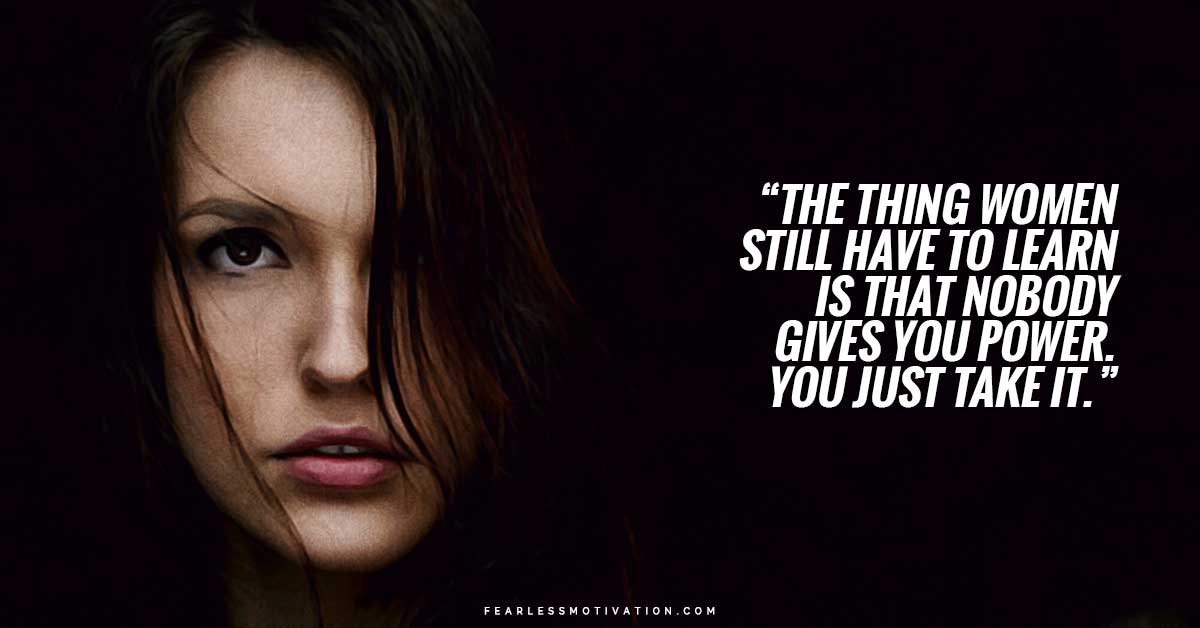 “Overcome the notion that you must be regular. It robs you of the chance to be extraordinary.” – Uta Hagen

“There are no regrets in life. Just lessons.”- Jennifer Aniston – Quotes From Famous Actresses

Now that’s a life philosophy we should all take to heart. Try it all. Learn what you can. Remember that you only get to take that which marks your soul with you.

Of course they will. The greatest dreams are the hardest to achieve. But that makes them all the greater when you do.

“Motherhood is given the brush-off in our society. ‘Oh, I’m just a mom,’ you hear women say. ‘Just’ a mom? Please! Being a mom is everything. It’s mentorship, it’s inspirational, it’s our hope for the future.” – Sally Field

And perhaps if we gave it a little bit more credit, then we’d make sure that mothers would give it the attention it deserves. Because though you hear the quote ‘it takes a village to raise a child’ most of that village is still the mom.

“When I was younger I’d berate myself: You’re fat, you’re not a good dancer, you’ll never have a boyfriend. I don’t sweat that kind of stuff anymore. Now every day is a miracle. I’ve also learned that if something is painful or upsetting, you shouldn’t hide from it. You should make it part of your life instead.” – Valerie Harper

When you run from something you only make it stronger. It is only when you embrace it that you realize is isn’t half as big a deal as you thought it would be.

Life isn’t always easy. There are hard parts and dark parts. But that doesn’t change that there are also wonderful parts. All you need to do is pay attention and you’ll see them there, every day. The warmth of the sun shine, a smile of love. And sure, sometimes they can seem small in comparison. But that’s because it’s so hard to focus on the right thing.

The trick is to remember to step back. Breathe. Realize that you are not your thoughts and your worries and let them go. If you can do that, then you’re well on your way. Because those who can smile when there is hardship, will smile for the rest of their lives.