Home
Never Give Up

How One Girl Used Mental Strength To Overcome Disability

My name is Alexandrine Maurice. I was born with a genetic disability called spinal muscular atrophy, because of which I spent most of my childhood and teenage years in a hospital addressing the potentially deadly symptoms, even though the doctors believed that saving someone in my situation was pointless.

My parents did everything they could so I could study at the local school rather than a specialized institute. And despite my numerous absences due to hospital visits, I was a good student. Unfortunately, I quickly became the scapegoat of my teachers, my classmates and even their parents. I was harassed, mocked and demeaned constantly. The school did not want me to be there, It seemed every teacher believed I should be sent to a specialized center. The only thing they saw when they looked at me was my disability, my very presence was bothering them.

My plan was to study for years and obtain a comprehensive education. Although I did all I could, because of the constant rejection I faced, I was forced to abandon my studies at 17.

I was quickly told that someone in my situation, with no degree or further education, had no future. I began to spiral into a deep depression

But I did not give up. I still had faith. I refused to believe the thousands of people who dismissed me. In fact their doubt gave me strength.

I always had a huge passion for Japanese culture. I had a dream to work in that field so I began tirelessly brainstorming ways I could get an opportunity within the Japanese arts. Despite the overwhelming odds. I always believed, I would find a way.

In 2015, I was able to speak with Takafumi Tsuruta the Japanese designer of the brand Tenbo. Once we were acquainted he offered me a modelling job for his brand during the Tokyo Collection.

Although travelling from France to Japan in my situation was a veritable feat, through sheer tenacity I made it to the shores of Japan some months later, the highlight was parading for Tenbo in front of a large crowd.

Since then, I’ve been working as a model for various brands. My objective is to promote diversity, to encourage people into accepting themselves, the same way I did.

Despite the physical difficulties and the rejections that I suffered during over the years, I refused to give up. Every set back gave me more strength, more resolve.

I know now that I am unbreakable.

Difference is good, even though most people subconsciously reject this notion. Because it is much easier to stand with with the crowd than to stand alone. But we must persist. Being noticed is the only way to change society. If nobody arises, nothing will change.

Imagine a world where everyone was the same, what a dull place it would be, variety is the spice of life not conformity. We must remember our evolution was possible only because some of us were different.

Even though society will try everything to make you believe so, just because you are different doesn’t mean your life is over. Of course, having a disability, or being different from everyone around you won’t make your life easier. But that does not mean it is wrong.

By pulling through the difficulties, by beating back the negativity, by imposing ourselves and refusing to shy away, we develop strength beyond measure.

We are all equals, despite our differences. As such, we all have the right to pursue our own ideal life. Which is why we must remain vigilant against those that persecute the different amongst us, for their short sighted-ness threatens the delicate balance of the world. We must be strong enough to protect those that can’t fight back, because one day they will do the same. It is in this way we can make the world a better place.

Be True To Yourself

During your life, no matter who you are, there will be people who think they know what is best for you, or that their view on the world is the right one, regardless of circumstance. For years, my relatives told me that I should get further education, to become a teacher or a lawyer.

Back then, I didn’t have a dream. So I believed them. I began to study intensely. So much that I fell sick and was forced to take a break from studying. It was only when I had time to think that I realized that what I was told to become was a choice that was made for me. What I truly wanted was to work in the artistic field, to express myself.

None of my relatives supported my dream. Everyone believed that because of my disability, I wouldn’t stand a chance. I should simply stick to my studies. And forget my ‘fantasies’.

I didn’t give up, I remained true to myself. If you’re convinced of what you want to do, don’t let anyone challenge your ideas. When your willing to work for it anything is possible, if you want it bad enough, you won’t let anyone convince you otherwise.

Curiosity Is A Quality

Don’t be afraid of getting involved in things you don’t know anything about. If it interests you, you should explore it.

Back then, I believed that the artistic field was superficial. But I realized that I was wrong. Every aspect of art can be used to communicate an important message.

We don’t know what we can learn if we try, if we don’t try we learn nothing.

If You Want To Do Something, Do Your Best

When you choose a path, no matter which one, you should always give your best. Of course, it’s not always easy. Sometimes, we just want to give up.

But by walking against the wind, even when you want to give up, is how you develop true mental strength. Even if it doesn’t work out, you won’t feel any guilt if you know you gave your all.

As I often say, when you do something, do it fully.

Don’t be afraid of who you are, nor of the path you chose. Nothing else will define your true personality. 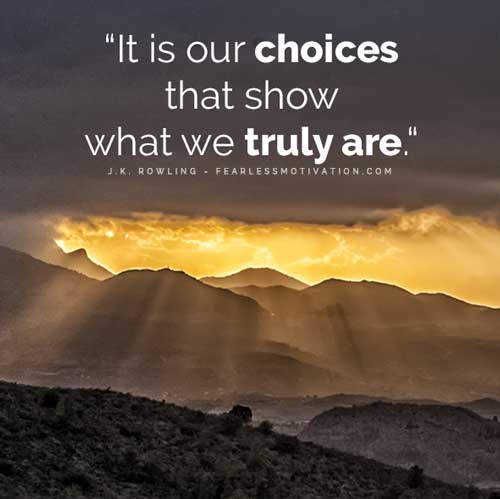