The Psychology Of Success As Told By These 5 Entrepreneurs

When you ask most people what it takes to become successful, they’ll tell you that success comes from hard work. The psychology of success is often overlooked entirely. While yes, hard work is part of the equation, they are missing a large part. You can never become successful if you don’t have the right mindset.

Becoming an entrepreneur will be the hardest challenge of your life because you’re becoming a different person than everyone else. When that happens, you will question yourself. Are you on the right path? Why don’t you just work for someone else? If you continue to ask yourself these questions, you will lose. When you have the right mindset, no matter what you face, you will come out the other side.

There are five entrepreneurs who developed the right mindset that has allowed them to succeed in their respective fields.

Grant Cardone is a New York Times Best-Selling Author, creator of Grant Cardone TV, CEO of four businesses, and currently has over $400 million worth of real estate holdings.

Working a job he hated was the driving force behind Grant shifting his mindset. He became good at the job he hated. Grant continued to focus on self-improvement and because of this, he was able to raise his monthly income through the sales commission job he was working.

When you’re training your mindset for success, what can you put all your focus into that’ll allow you to achieve success? For Grant, it was into producing income. For you, it could be getting more clients.

It’s easy to stretch yourself thin and focus on too many ideas instead of one big idea. It’s a lot easier to become successful at one thing than it will ever be to be successful at multiple things. What can you focus on today that will help achieve your bottom line tomorrow? 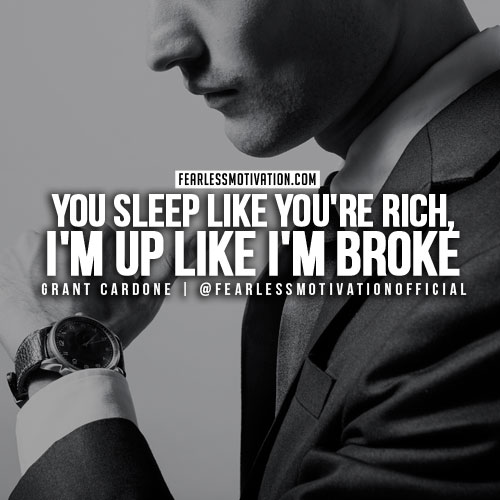 Melyssa Griffin is the founder of melyssagriffin.com where she gives you advice on how to start a successful online business and host of the pursuit with purpose podcast.

Melyssa’s  mindset changed when she realized that telling herself she couldn’t do something would not work out. If she wanted to get to the next level in her life, she knew that even if she didn’t know how to do something; she was going to figure it out no matter how long it would take her.

There are so many ways you can learn something in today’s day and age that telling yourself you can’t do something is ludicrous. If you want to make six-figures, do your research on how others made six-figures. What habits are they doing different from the ones you have? How do they plan their day? What type of work are they doing? The answer to every question is there if you’re willing to do the research. Just because you don’t know how to do something shouldn’t hold you back from achieving whatever you set your mind too.

Being an entrepreneur, Melyssa realized there are tons of negative events that can take place. To counteract the negative events, Melyssa would take to gratitude journal, writing the positive events taking place in her life. What you’re essentially doing is creating a positive perspective view of the world for yourself.

What research can you do today that’ll help enhance your mindset tomorrow?

From an early age, Alan learned the art of willpower. Alan has gone broke twice and has come back both times. He didn’t give up on his dreams of starting a business despite the setbacks he faced multiple times.

Alan understood that if he wanted something, it had to be a must. He couldn’t just kinda want it. Too many people just kinda want it. And do you notice that most people aren’t where they want to be in life? If you’re not ready to go all in and give your idea or dream 100%, you will never succeed because the second you doubt yourself you will fail. Put in the work every single day whether you feel like it or not and don’t leave any free time to doubt yourself.

When he wasn’t feeling fulfilled in his life, Alan turned to self-development, but more importantly, psychology to get him out of the current state he had felt trapped in. Alan realized that success doesn’t start with everything going on around you, it starts with what’s already inside of you. You already have the mindset inside yourself you need to become successful and it’s up to you to cultivate that mindset.

The change started in Alan’s mindset when he came across the saying, “Life happens for us, not to us.” Everything that happens in your life is an opportunity to grow, are you going to take advantage of it?

Ryan Holiday is the best-selling author of multiple books including Ego Is The Enemy, and The Obstacle Is The Way and he is the former marketing director at American Apparel.

When Ryan was trying to cultivate the mindset that would lead him to success, he knew that he had to cast his ego to the side. You can get an inflated ego when you start a business because you accumulate a little success and think that’s the way it will always go. This is a mindset set trap for yourself because there will come a day when you encounter failure and you won’t know how to deal with it. No matter how much success you achieve, keep pushing forward because you never know when you might deal with a hardship.

While not having an ego can lead you to the right mindset, you need to focus on building confidence for yourself. Confidence comes from taking action every day. You will not have any confidence if you sit and watch TV every day and why should you if you do that? You know how much work you’re actually putting in. Confidence is something you earn.

On Ryan’s conquest to motivate himself, he focuses on a practice called bulletproofing himself. What him is doing is asking himself if he would be okay with the worst possible outcome that could come to him. If he’s okay with it, he’ll continue to carry on and keep doing the work he was already previously doing. What’s the worst that could happen to you from following your dreams?

David Goggins is a retired Navy Seal and an ultra-endurance athlete who has ran some of the toughest races in the world.

For Goggins, it’s simple, you do what you want don’t to do and keep doing it. There were numerous low points in his life, yet he didn’t let that stop him from becoming successful. He thrived on overcoming challenges and adversities. Goggins knew with each challenge he was able to overcome, it would make him mentally tougher.

What can you do to make yourself mentally tougher? Are you taking the easy way or actually putting in the work? When you take the easy way, you will never get mentally tougher. You become mentally tougher overtime with each difficult task you accomplish. Follow the advice Goggins gives and do what you don’t want to do on a daily basis.

Your mindset could be the one thing holding you back from becoming a successful entrepreneur. Don’t keep telling yourself you will become mentally tougher or you’ll do the hard tasks later because eventually there won’t be another day for you to do those hard tasks. You should focus on what you can control today.

Ask yourself, “What’s something I’ve been putting off?” Why have you been putting it off and what are you going to do to change that? It’s up to you to create a better life for yourself because no one will help you! And that starts with cultivating the right mindset.