Stephen King is an incredibly successful author who has published 54 novels and over 200 short stories. known as the “King of Horror” for his domination in the genre, his work can be extremely motivating as well as it has the ability to change the readers perception of the world around them thus enabling a shift in conciousness.

When King was three years old, his father, Donald King, deserted his family after telling them he was just “going to buy a pack of cigarettes”. His mother, Nellie Pillsbury, raised King and his adopted older brother David by herself, sometimes under great financial strain. The family moved around a lot finally settling in Maine, the easternmost state in the contiguous United States.

As a child, King witnessed a gruesome accident – one of his friends was caught on a railroad and struck by a train. It has been suggested that this could have been the inspiration for King’s darker works, though King himself dismisses the idea and has said he has no memory of the event. 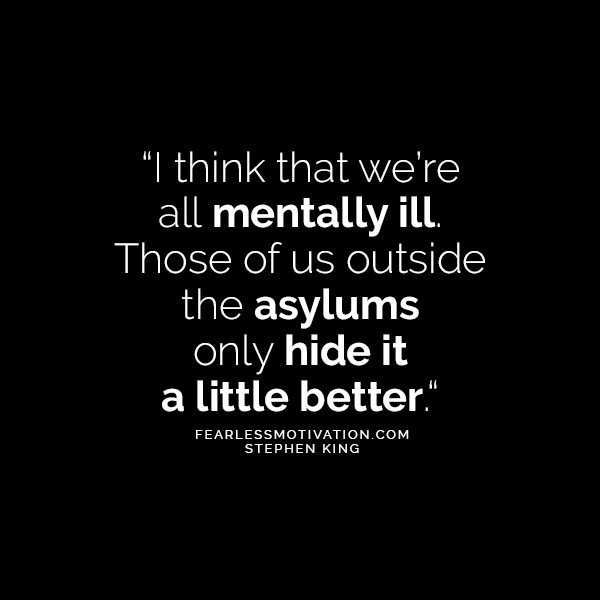 After finishing his university studies with a Bachelor of Arts in English and obtaining a certificate to teach high school, King taught English at Hampden Academy in Hampden, Maine. During this time, he and his family lived in a trailer.  During this period, King began a number of novels. One of his first ideas was of a young girl with psychic powers. However, he grew discouraged, and threw it into the trash.

Tabitha (his wife) later rescued it and encouraged him to finish it. After completing the novel, he titled it Carrie, and more or less forgot about it. Later, he received an offer to buy it with a $2,500 advance (not a large advance for a novel, even at that time). Shortly after, the value of Carrie was realized with the paperback rights being sold for $400,000.

Since that first novel Stephen King has gone on to become one of the most prolific and successful authors of all time, churning out masterpieces on a yearly basis. Having struggled with alcoholism and stimulant addiction (namely cocaine) his family staged an intervention after which he sought help, quit all drugs (including alcohol) in the late 1980s, and has remained sober since.

Despite his struggles and tribulations Stephen King never gave up on his passion and worked on his writing with every spare moment he had, even when he failed to believe in himself. After ever set-back he dusted himself off and got back to work.

“The scariest moment is always just before you start.” – Stephen King

“I think that we’re all mentally ill. Those of us outside the asylums only hide it a little better.”

We all have our struggles, some of us just mask it better. Don’t be fooled into thinking you’re the only one doing it tough, there are millions just like you that have been through or done what you are trying to do. So reach out you’ll be surprised how willing they are to help.

Difficulty, darkness & imperfection are things everyone goes through, how you respond to it will define you.

“The place where you made your stand never mattered. Only that you were there.. and still on your feet.” – Stephen King Quotes

It doesn’t matter where, just that you do. Take a stand now. Vow to improve your life, achieve that goal or commit yourself to a higher standard. You were not brought into this world to be average.

“Get busy living or get busy dying.” — Stephen King

Life is way too short to simply go through the motions. So many people seem to “get busy dying” way more than living as they get older. Don’t waste a single day of your life. You don’t know how long you have, make sure you live and cherish each moment. 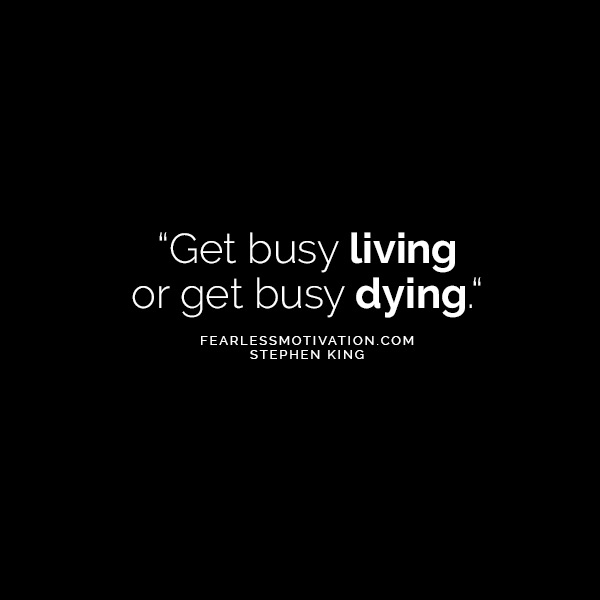 “Monsters are real, and ghosts are real too. They live inside us, and sometimes, they win.” — Stephen King Quotes

Fear, doubt, and insecurities are real but don’t let them be the reason you don’t live the life of your dreams. The most successful people in the world experience these ghosts as well, they just choose not to listen.

One of the best ways to avoid them is to learn how to listen to that negative inner critic. A morning meditation or mindfulness practice can help you become more aware of what is going on inside. Once you learn that you don’t have to listen to every negative thought you can free yourself to live a better life.

“There’s no harm in hoping for the best as long as you’re prepared for the worst.” – Stephen King

Most people always worry and think about the worst case scenario instead of thinking how good it could turn out. Don’t be afraid to think about the whole plan working out. Think about how you can make your dreams happen.

Focus the majority of your time on how it could go right instead of what could go wrong.

“We never know which lives we influence, or when, or why.” — Stephen King

You never know who you are influencing with your actions. If you’ve been excelling at work you might motivate the people around you. If you have been getting up early, creating a morning routine, and exercising you might be motivating your spouse.

People are always watching your actions, make sure you lead by example. You never know whose life you could change.

“You can, you should, and if you’re brave enough to start, you will.” – Stephen King

Fear stops 90% of people. With enough determination, anything is possible.

You can learn any skill if you have a passion for it. You just have to braver than the 90% and follow through.

Take a leap of faith and you will be amazed by where you land. 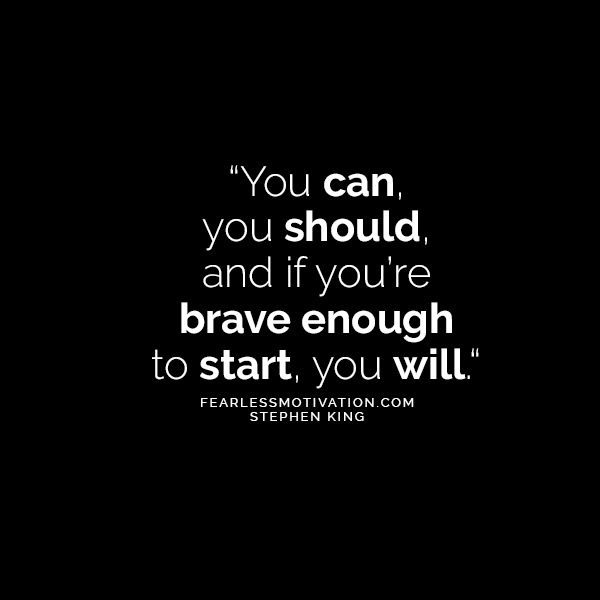 “Talent is cheaper than table salt. What separates the talented individual from the successful one is a lot of hard work.”

Everyone has talent to some degree, and that is what people focus on, how good people are at things at a base level.

Why? Talent is the smallest part of the equation, we hear again and again the difference is your focus, determination and work ethic.

With those 3 attributes you will achieve more than any ordinary talent in your field.

“The only mortal sin is giving up.” – Stephen King Quotes

Never give up. If something means a great deal to your life make sure you see it through.

Nothing great was ever accomplished from quitting. The winners learned to persevere through the hard times. Quitting is never the answer.

Use these Stephen King quotes to realize that life is finite, don’t waste another moment. Get out there and start living.

You only get one life, make the most of it and never give up!