How To Break Any Bad Habit – Understand & Overcome

If you pay attention to everything that you do throughout the day, I’m sure you would find one bad habit. In the life of human beings, habits good and bad play a primary role. We go through our day mirroring the actions of yesterday; not making many new choices. People all over the globe may have different habits, but one thing they have in common is that they are all living repetitiously.

Some years back I found myself duped into some bad habits. When the realization hit me for the first time, my habits had already reached the level of automaticity. Automaticity refers to the point which after many repetitions the habit is performed seubconsciously; when you no longer have to think about the routine before you begin the act of doing it. Wanting to break the bad habits I had collected, my research into the science of habits began.. 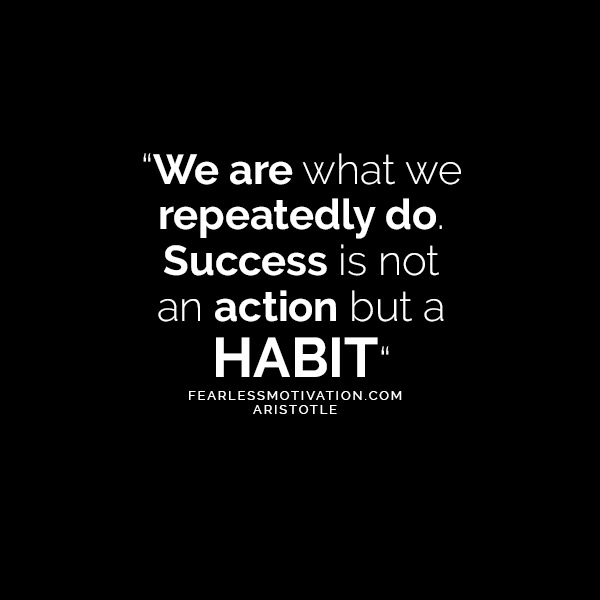 What is a habit?

To understand how a habit is formed one needs to know what habit is?

It’s a tendency, to do something, that visits you frequently. A routine that you follow regularly, that good or bad can be hard to change.

Art of breaking a bad habit

Every day countless people aspire to break a particular habit. The reason behind this aspiration could be anything from wanting to improve your health,  watching a friend quit or after a moment of motivation from watching Fearless Motivation’s latest video. Unless you have landed on this page through wizardry, I think it’s safe to assume that you already have a habit in mind that you would like to break. Regardless of the source, it’s crucial to find motivation if you want to break a habit loop.

Once I heard a friend of mine say something about a 21 days theory which implies that if a person manages to stay away from a habit for 21 days that person isn’t likely to go back to the pattern again. This theory was introduced back in the 1950s by Maxwell Maltz. This theory was proposed anecdotally, and although popular there was no science back it up.

The effort one has to put in the process of replacement is directly related to how close to the automaticity line your habit is. This applies to new habits also, when it comes to starting a new habit the first few days one has to invest more willpower to perform the routine. Later it becomes easier to maintain the routine as it falls closer to the line of automaticity.

Our brain tries to conserve willpower especially when you willpower meter gets low. So, after a tiring day you’re much more likely to give in to a bad habit or procrastinate a good one.

By understanding the concept of willpower, you can use this knowledge to make things following your habits easier for you, or following a way out of a habit for that matter.

Think of willpower as a battery. When you wake up, the battery is completely charged, as the day progresses you use your willpower working and making decisions. Typically, by the end of the day the battery gets drained just like that of your smartphone when you’re constantly using it. However if you learn how to recharge along the way you’ll save yourself from low levels of willpower. Hence, it will become easier to stick or quit a habit.

Relaxation practices can recharge willpower. So, instead of working constantly take smaller more frequent breaks. Studies have shown that taking necessary breaks helps you not only become more productive than working continuously but improves willpower. Find whatever works for you meditation, breathing exercises (alla Tony Robbins) or perhaps you need to change the people you live or work with?

Habit loop is a three-step process of repetition which turns a habit into an addiction; where it becomes very difficult to break. To know how to break the habit loop you should know how it is formed.

Following are the three steps that make the habit loop:

When the mind sees the cue, it takes reference from the last occurrence and recalls the reward received. It then convinces you to start the routine again. As your own brain is making the request, you’re likely to give in first subconsciously and then consciously as it is the path of least resistance. To pin your bad habits down, you need to be aware of the triggers and rewards before they happen. So are mentally prepared for your brain trying to coerce your behaviour. You must outsmart yourself!

The cue could come to you in different ways (time, place, person, or event, etc.) Next time your mind gets a signal to perform the routine write it down or make a mental note of the trigger. You must be aware of it to begin the conscious process of change.

If having a clear intention was enough to break a habit there would not be so many people trying to give up their addictions every week of their lives. they would just do it.. Along with a clean intention, one needs a defined strategy too.

When I planned to quit smoking, I first thoughtfully looked for my cues; someone’s call for it, boredom, and whenever I ate something. Once I became aware of the pattern no matter how many times the trigger presented itself, it never caught me off guard because I was always aware that it’d occur.

The 3 Mountains – break any bad habit

Sometimes reward is direct, while other times it lurks inside the pattern. For me the main reward from smoking was socializing. I was never a fan of smoking alone, in fact when I didn’t meet anyone I didn’t feel like smoking at all. So, I changed the times I would socialize at work and changed the people I socialised with outside of work. It wasn’t easy but positive change demands sacrifice.

The first 3 days I refer to as the 3 mountains. you must have the mental endurance to scale each one, by day 4 you will reach the summit and it is all downhill from there! But remember you are still hiking so there is a degree of difficulty and you must remain focused to avoid falling, but it will get easier the further you travel. 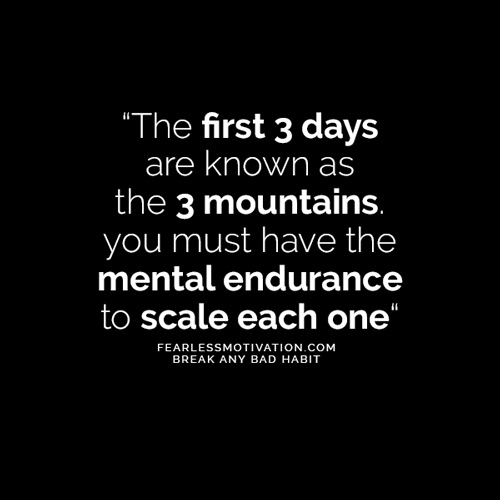 No one can make you quit anything if you’re not willing to do it for yourself, but you’ve decided that you’re going to get ‘clean’ for good this time, then I’m sure these tips will be of great help for you. Good luck.