All Successful People Have These 5 Things In Common – Evan Carmichael

Trait #1 is to Raise Your Standards

There’s a reason why you end up being the average of your five closest friends. It’s because you are a product of your environment. If you have people with a poor mindset around you, if you’re surrounded by others who default to scarcity, limiting beliefs, and complaining, guess what you are most likely to become? Self-made successful people almost all come from challenging situations and environments. There are a few exceptions, but for the most part these people all came from more challenging upbringings and situations than you’re currently facing right now. So how did they break free? They chose to raise their standards for what they will no longer accept from themselves and the people around them. That the life they were living was no longer acceptable. That something had to change. That they demanded more from themselves. They raised their standards instead of blaming their circumstances and they won.

I’ve spent years researching the most successful entrepreneurs, actors, artists, singers, writers, innovators, and leaders, and one of the most consistent pieces of advice from all of them is that you need to follow your passion. Find the thing that you would do even if you never got paid for it. Find the thing that you can be so obsessed about that you’ll keep going even if doesn’t make practical sense, even if the people around you say you’re crazy, even if it has a low probability of succeeding.  You keep going because you need to keep going. Because it’s a part of you. Because you’ll be an army of one to will this idea of yours into existence. Because you don’t want to look back on your life and realize that you quit on one of the most important projects of your life. You don’t get to be the best by doing what you hate or just find okay. You become the best by loving what you do more than anyone else and following that passion through.

Trait #3 is to Embrace Failure

Most people are so afraid to fail that they don’t even try, and that’s the biggest failure of all.  When you first start anything, you’re going to fail. When you first try to snowboard, you will fall. When you first try to learn French, you will mispronounce every single word. And when you first start on your entrepreneurial journey, you’re going to make many mistakes. Because you don’t know what you’re doing… yet. It’s normal. If you’re failing, it means you’re trying something. And if you keep trying, eventually you’ll hit on something big that works. Successful people fail their way to success. They failed at more things than you’ve even tried. The fact that you fail doesn’t mean that you, as a human, are a failure. It means you’re learning how to get better. If you want to increase your success rate then you need to increase your failure rate and stop attaching your self-worth to winning every single race.

Trait #4 is to Ignore the #LittleMan

The #LittleMan is the person in your life who tells you all the reasons why your ideas won’t work and instead of helping you build up, they try to tear you down. Sometimes it’s out of love, sometimes out of jealousy, and sometimes we do it to ourselves. You will never have the success you’re after if you’re living your life according to other people’s expectations.  When you’re growing up you do what your parents tell you to do. But at some point you need to decide that this is your life! You’re going to live it and do what you want instead of trying to please the people around you. Do you want to be 30 and still doing what your parents want? How about when you’re 40? Or 50?  At what point do you decide to live your version of your life and ignore the #LittleMan? If you want to have success it comes by doing something big and if you’re doing something big there will be people who hate on your ideas out of their own insecurities and limited thinking. Are you going to listen to them or make your dreams happen?

Trait #5 is to Believe

Whether you believe you can or can’t do something, you’re right. There are so many talented, amazing, creative people out there who have passion, commitment, and genius inside them.  They just don’t believe that they can make their dreams happen, and so they don’t. Meanwhile others with less talent rise to the top because they believed that they could. Building belief comes through action. You don’t need to see the whole staircase, just the step in front of you. When you conquer one step, it gives you the confidence to take the next one, and the next one. If you’re sitting at home on the couch telling yourself that you can’t take that first step, then you’re right. You can’t. But successful people don’t talk to themselves like that. 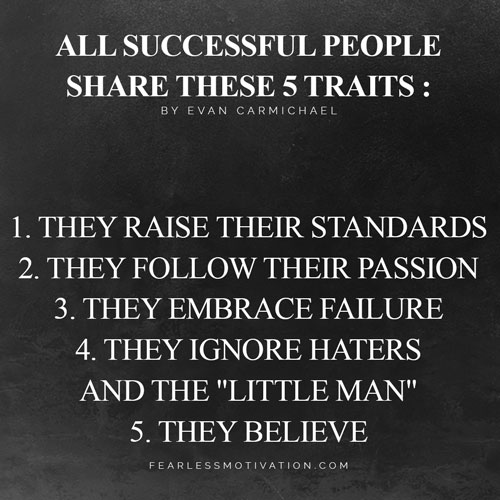 Becoming the success you want to be is achievable. People who came from less have done it, so can you. But you need to change your mindset around these 5 traits.  You need to raise your standards, follow your passion, embrace failure, ignore the #LittleMan, and believe that it’s possible.

It’s not easy… it’s a journey… but you’ve got an entire life ahead of you. What are you waiting for?