Memorable mention of men and their great works have been recognised throughout in history. What is often overlooked are the many fearless sacrifices made by women! Thankfully in today’s world, this is changing rapidly. Women participate in every industry, their efforts and ideologies have shaped the world as we know it.

But, what led to this change? What made the male dominant society take notice of the noble works done by the women?

Well, in all fairness women like Mother Teresa, Elizabeth Arden, Annie Basant, Madam C.J. Walker led to this revolution. They took command and introduced the world to the efforts initiated by them. These effervescent women supported and inspired other women to follow their own dreams. They survived against overwhelming odds and withstood all pressures to thrive. Let’s take a bow to these inspirations that changed the world and transformed the perception of mankind as a whole.

An inspiring role model can be a powerful influence on your own success. A powerful role model will give you strength in your darkest hour. These women who changed the world have legacies that will live on to inspire others for generations.

9 Most Inspiring Women Who Changed The World

Kathrine Switzer, the first women to officially run the Boston Marathon is a muse to those women who wish to break the barriers of gender-inequality. When Switzer ran her first marathon she was just a 19-year-old girl with a passion for competing in the marathon as there was no women’s running team, then.

While Kathrine officially was running her first marathon, she was pounced on by an official, Jock Semple. However, Switzer decided to continue running. And, her participation changed everything. She became a role model for distance running. Her world-changing sporting achievements marked women’s name in the history.

After her marathon, Switzer established a non-profit organization (261 Fearless) with the aim to empower women through running. Her marathon number (261) became an iconic and imperative symbol of equality. Most of all, Switzer’s valor proved that nothing is impossible! And, despite the hardships, success comes to those who yearn for it.

“All you need is the courage to believe in yourself and put one foot forward in front of the other.” – Kathrine Switzer 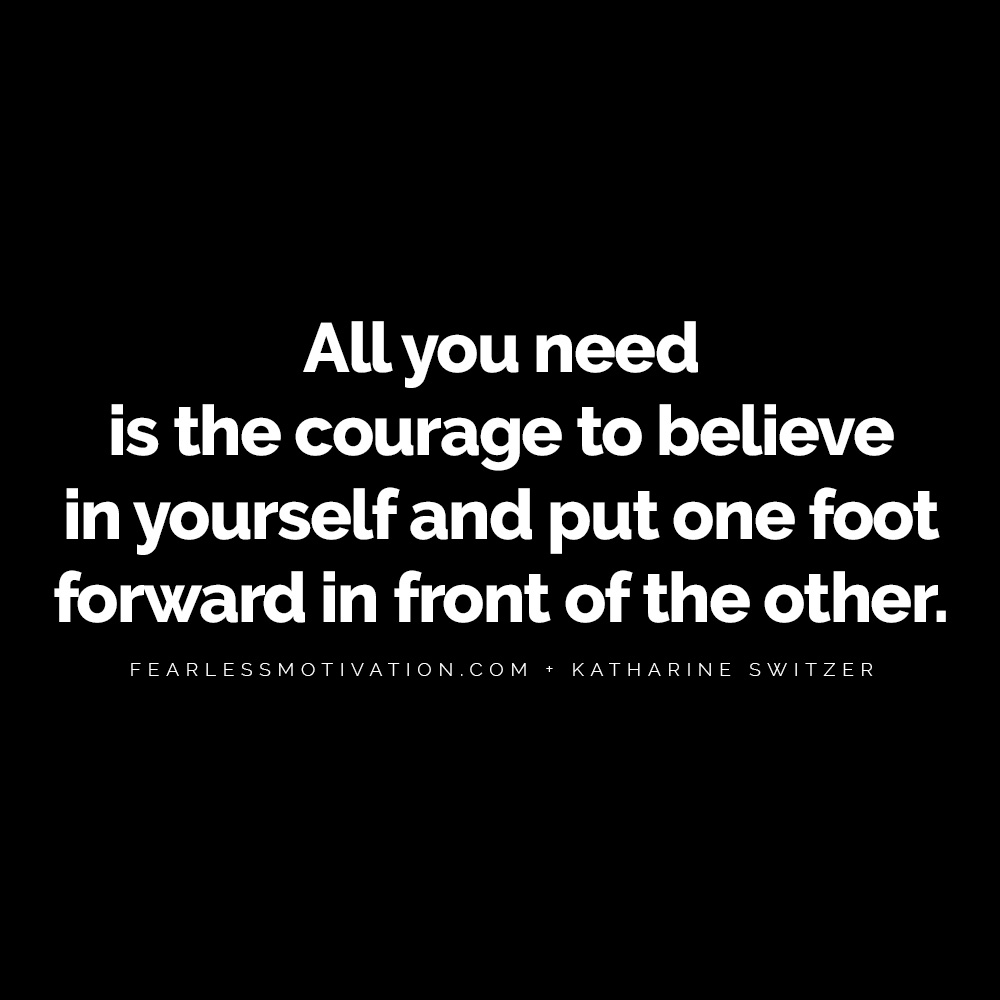 Fighting against racial discrimination, Rosa Parks was one of those women who changed the world for better. She was a woman of unquestionable honesty and integrity. Also known as “the mother of the civil rights movement”, Rosa Parks stood strong in her beliefs to abolish the segregation between black and white people.

Together with her husband, Parks joined the National Association for the Advancement of Coloured People (NAACP) to put an end to segregation and discrimination.

Parks rose to prominence on December 1st, 1955. Parks was arrested because she refused to give up her seat to a white man. According to city’s racial segregation ordinances, Parks defied the law and was promptly arrested.

After her arrest, the African-American population of Montgomery launched a movement to boycott the city buses after a long protest of 381 days, the court ruled in favor of Parks & Aurelia Browder, ruling the racial segregation laws as unconstitutional.

“You must never be fearful about what you are doing when it is right.” – Rosa Parks

Amelia Earhart was a woman who possessed the guts to stand against all odds. She was the first woman in the history to fly solo across the Atlantic. Earhart completely altered the playing field for women. She broke the stereotype of what used be called “male jobs.”

She was firm in her ways and positively supported the modern views of equal opportunity between men and women. When Amelia began to teach as an aviation faculty, she noticed a spark of curiosity in her students. It was then, she started counseling women on career choices.

Earhart gave lectures to inspire others with her love of aviation. Her zeal for flying unraveled into her passion for encouraging women to follow their dreams. She made girls realize their own limitless potential. Also, she made them understand that the restrictions imposed on them by society do not need to dictate their ultimate success.

“Use your fear. It can take you to the place where you store your courage.” – Amelia Earhart 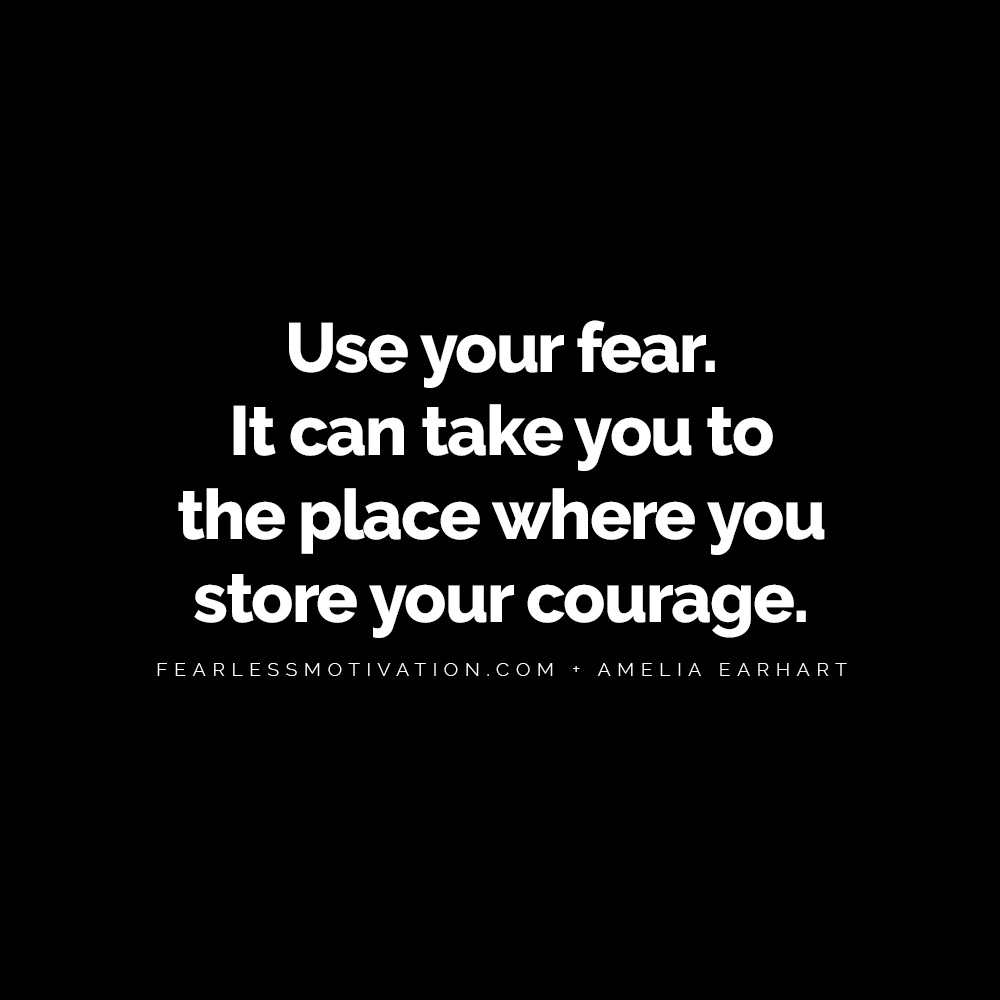 Known as a revolutionary of the fashion industry, Coco Chanel transformed the world with her bold ideas. She changed the definition of how women perceived themselves, and how society perceived women.

Her initiatives for women gave women a place in society, where they were no longer seen as pretty little things, but free thinking individuals. Coco expanded the horizon for women. While once women were unable to ride horses freely, she designed pants to help women move and work without restraint, adding to the momentum of emerging freedom and acceptance of womens rights.

These little changes, then, formed a larger picture in the early 20th century. Women were allowed to vote, and there was a significant increase in feminism. Coco believed in the theory of dress to impress!

J.K. Rowling, the world-famous writer of the novel series Harry Potter, was once a jobless single mother on welfare. Her script was rejected by twelve publishing houses. Despite overwhelming rejection Rowling never gave up.

After continuous efforts, her first book was finally sold for $4,000. At present, J.K. Rowling’s net worth is around $1 Billion. She could have given up but her passion was so fierce her success was inevitable.

“Rock bottom became the solid foundation on which I rebuilt my life.” – J.K. Rowling 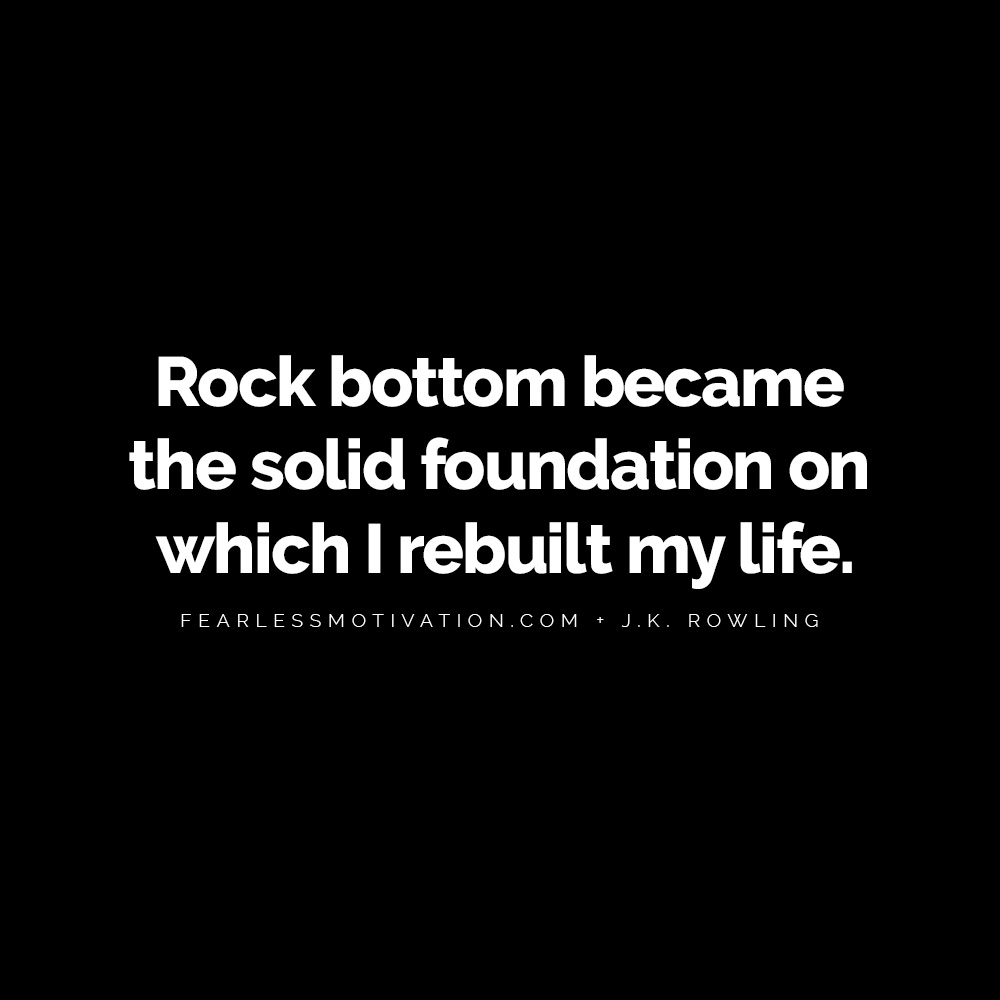 Politics was completely male-dominated before Indira Gandhi was elected as the first female prime minister of India. Indira Gandhi’s election led to the involvement of females not just in politics but in society as a whole. Due to her powerful decisions and unbending strength, she became a synonym of female empowerment.

She showed the nation the significance of taking benefit from your surroundings, however difficult they may seem, and not allowing gender to restrain you. Her leadership style is still a standard followed today. Mrs. Gandhi through her iron-will reminded us women’s participation is an essential factor for general peace and prosperity of a nation. Her work has been commended and inspiring to all that have learned of it.

“Opportunities are not offered. They must be wrestled and worked for.” – Indira Gandhi

When we mention the most inspiring women, Helen Keller is one name that will be remembered always. She showed the world that disabilities cannot stop you from achieving what you desire. Despite of her disabilities, she became the first blind and deaf woman to earn a Bachelor’s degree in Art.

Her power of positivity and empathetic nature made her an exemplar to others. Helen Keller always remarked that there are no boundaries, no limits, only the ones we impose on ourselves. Today due to her brave effort, many people with disabilities are confident to earn their living themselves.

“You will succeed if you persevere. And, you will find joy in overcoming obstacles.” – Helen Keller 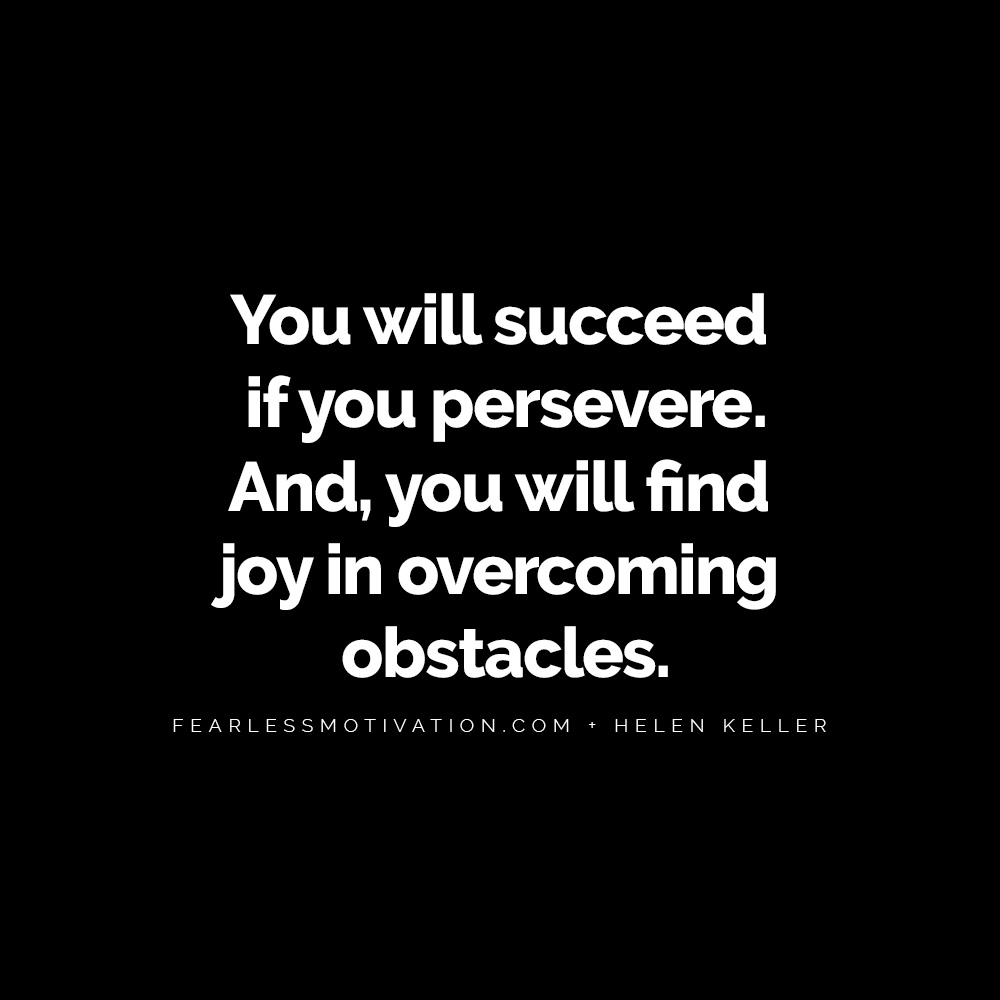 Breaking the shackles of stereotype, Benazir Bhutto (BB) became the first woman to lead an Islamic state. Prior to her election, the scholars of Islam quoted – a country that chooses to be governed by a woman will not prosper. Despite responding to such comments, Benazir followed in her father’s footsteps.

Benazir’s father encouraged her to study about other female leaders, including Joan of Arc and Indira Gandhi. After the execution of her father Zulfikar Ali Bhutto, Benazir bravely took command of her father’s leadership party.

Having been chosen as the 11th Prime Minister of Pakistan, BB tried her best to develop a cordial environment for her people. She envisioned removing dictatorial rule from her country and advocated the rights of women. Being the Iron Lady and a firm believer of democracy, Benazir continued to defy her critics, dedicating her life to implementing her vision of a forward thinking Pakistan, until her assassination in 2007.

“I put my life in danger and came here because I feel this country is in danger.” – Benazir Bhutto

A noted philanthropist, Marie Curie was the first women to receive the Noble Prize. And, not only once, but twice! She changed the course of science and medicine. Her discoveries of two powerful elements polonium and radium are the reason that most cancers and other illnesses are now potentially curable. The process is known today as chemotherapy.

Despite being from a poor family, Marie Curie later known as Madam Curie, carved her own path to benefit mankind. She is a perfect example for those who wish to achieve something in life despite a lack of resources.

“Never let one’s self be beaten down by persons or by events.” – Marie Curie 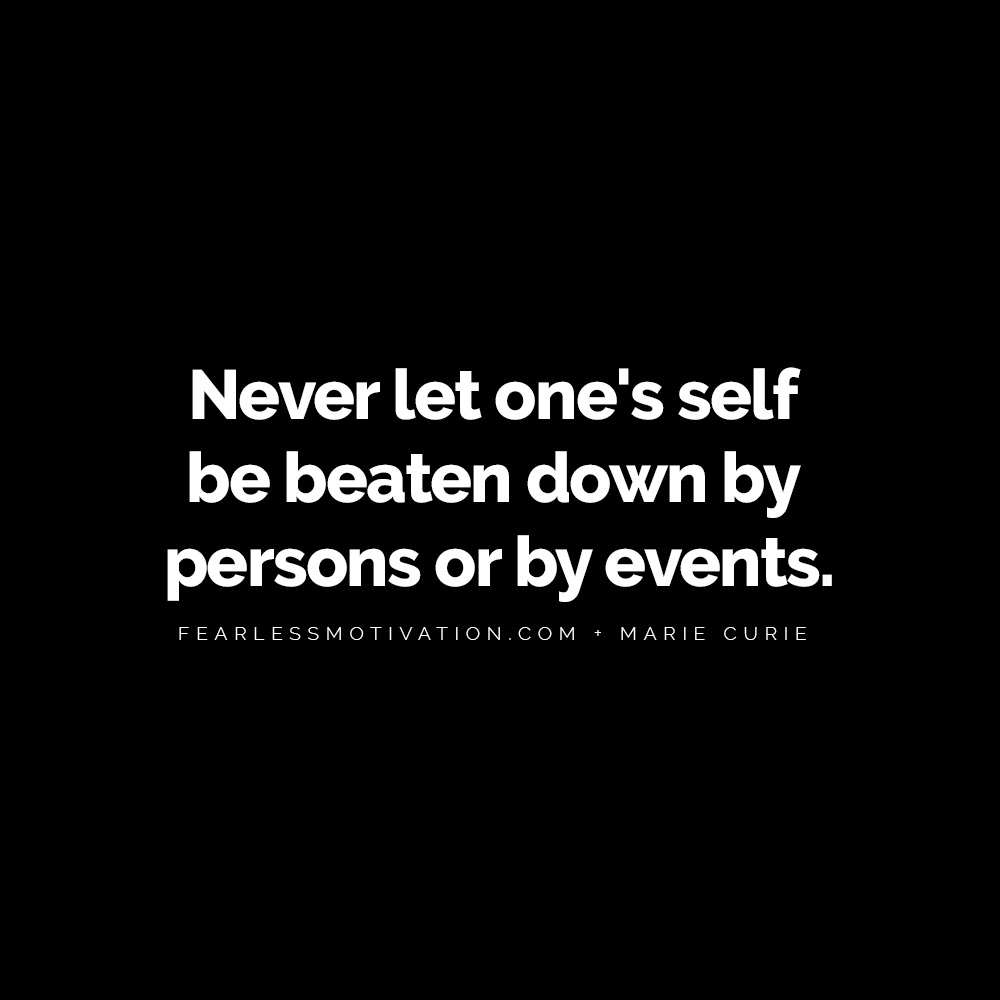 These women are proof nothing is impossible to achieve if you set your mind on it. Take dismissals as a part of the journey, be strong, stay hopeful and enjoy the ups & downs! For they are both guiding you towards your destiny.