David Goggins Quotes and Life Lessons to Overcome Anything in Life

Soldiers are the toughest breed on the planet. But this man is the toughest among them. He has fought for his country for 21 years, has completed over 50 endurance races, and is widely renowned as the world’s toughest athlete.

One of his remarkable achievements is completing the Mont Blanc 100-mile race. In this race, Goggins had to complete 100 miles within 24 hours and after 70 miles his body had shut down.

He had stress fractures in his legs, shin splints, his kidneys had shut down, he was pooping his pants because the bathroom was too far away, and peeing blood because his organs were failing. As if this wasn’t enough, he also had a hole in his heart while he finished the 100 miles.

From an average Joe’s perspective, he was almost on the brink of death. But he didn’t stop. And that’s why he’s the toughest man in the world.

Here are some David Goggins quotes and key life lessons to make you unbeatable.

1. To Grow in Life, Be Willing to Suffer

As human beings, we run away from pain and suffering. This mechanism is ingrained in our brains. But if we become conscious of this pattern and deliberately do the things that we fear, we will embark on a path of lasting greatness.

“It’s so easy to be great nowadays, because everyone else is weak. If you have ANY mental toughness, if you have any fraction of self-discipline; The ability to not want to do it, but still do it; If you can get through to doing things that you hate to do: on the other side is GREATNESS ” – David Goggins Quotes 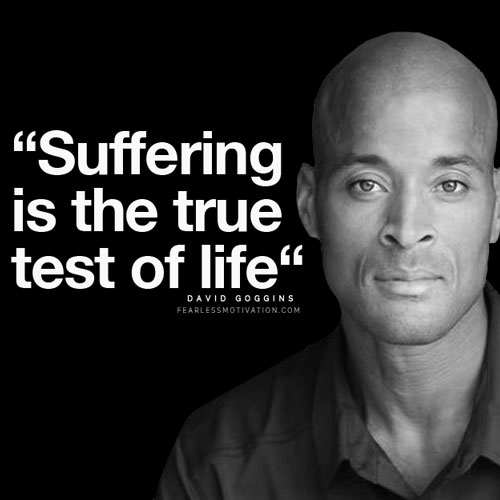 According to David Goggins, people of our generation quit as soon as they’re talked to. If someone tells them that they can’t do it, they just give up. But to be mentally tough, you have to accept adversity.

“It’s okay, you might be called a nigger one day. It’s okay…Let them call you that. What are you going to do now? They don’t own your life. How you’re going to control that now?…Thicken your skin.” – David Goggins Quotes

3. Don’t Live in An External World, Go Inside Yourself

Goggins advises that to truly become great and unstoppable, you need to go inside yourself into introspection and find who you are.

“We live in an external world. Everything, you have to see it, touch it. If you can for the rest of your life, live inside yourself – to find greatness, you have to go inside”. – David Goggins Quotes

Go sit alone in a room. Ponder over the course of your life, how it has shaped you, what desires you developed along your journey, notice any important transitions and how they changed you. You need to read your own book.

We have a tendency to run away from the truth. When things are not working, it is easy to blame this or that.

In order to emerge stronger on the other side, we need to accept our faults.

“For me to fix this, I gotta read my book. Okay, I’m afraid of my shadow. How can I overcome that? – Go in the military. Get your ass kicked. Do things you hate to do. Be uncomfortable every f***ing day of your life.” – David Goggins Quotes

He told himself he was dumb and needed to educate himself, as painful as it may sound. We need to confront our darker truths in order to harness the power they have over us.

5. Use A Cookie Jar to Turn Fear on Itself

When life gets tough, you need to count on your strengths. According to him, in times of suffering, we forget who we really are.

In the Mont Blanc race, Goggins body had shut down after running for 70 miles and he still had to run 30 miles. He was in a horrible state – feet were broken, ankles were taped, shin splints, stress fractures, pooping his pants, peeing blood. But by remembering his strengths, he kept going.

“You went three hell weeks and finished two. One of the hells weeks, a guy died, it was so bad. Oh, you ARE a motherf***king badass” – David Goggins Quotes

Whenever you feel down, you need to go down in the cookie jar and remember who you really are. You are not the weak person your mind may be trying to tell you, you are the person that has survived tough times in the past. You are your achievements.

By going into the cookie jar, you can turn fear on itself and harness it for strength. 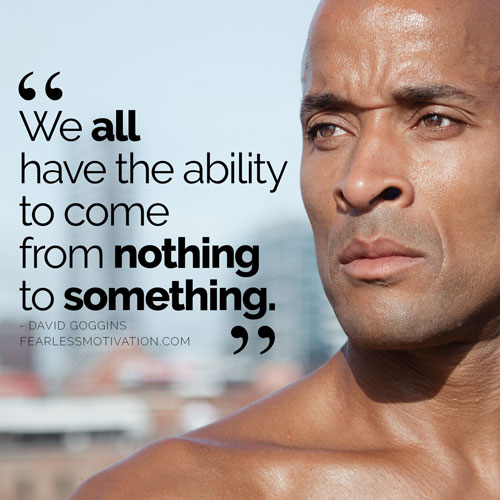 6.  Self-Talk and Visualization Are The Keys to Fighting Negativity

We have seen how Goggins used positive self-talk for keep going through the hard times. His body had shut down, a doctor would qualify him as unfit for running and probably send him directly to a hospital. But he used empowering words to turn pain into power.

I said, “Who on this f***ing earth would be going right now? YOU ARE!” I believed it enough to where my body said, “he’s not gonna stop”. – David Goggins Quotes

The second most powerful tool we have is our imagination. Visualize yourself succeeding, living the life you want, celebrating the peak of your success with your friends and family. Not only long-term, you can visualize for daily challenges as well. You can do it with your workout, your job, your love life – anything. 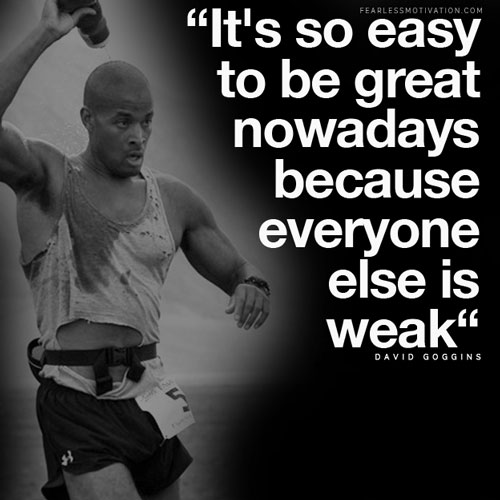 7. If You Choose to Do Something, Attack It

If you ever set out to do something, invest hundred percent of your energy in it. Don’t take a half-assed approach. According to Goggins, you’re going to do it anyway, so you might as well go hard. Because in the end, it’s all about how you’ll be remembered.

“I hated jumping out of airplanes, I hated shooting guns, I hated the job as a Navy SEAL – but I did it because I wanted to change myself. Everything you do, I’m not really comfortable doing, but if you choose to go that route, to be a navy seal, you might as well go be the hardest motherf***er in the world.” – David Goggins Quotes

8. Use The Accountability Mirror

Goggins used the accountability mirror to make sure he was going in the right direction. If on some particular day, something didn’t feel right, Goggins would write it on a sticky note and fix that thing.

We can use accountability in our daily life to become the person we want to be. If something doesn’t feel good, write it down and fix it as soon as possible.

“I tried to do so many things to fit in. But when you look in the mirror, that’s the one person you can’t lie to.” – David Goggins Quotes

9. Create A Vision in Your Mind

Goggins says that external things cannot transform your life, not even Goggins himself. They can give you a spark, but unless you create a vision, see the person you want to be in your mind, your life will remain the same.

You need to see the future ahead of yourself, how you want to live. Keep in touch with that vision every single day. Again this is about going inside yourself.

Cognitive skills require conscious intellectual effort and are based on reasoning, remembering, and thinking. For example, solving a puzzle or writing an essay require cognitive skills.

Goggins says you must learn to work hard, show courage, and have self-discipline. Overcoming adversity requires all the non-cognitive skills.

In the end, being fearless, being not afraid to face your fears will make you happy. As Goggins says,

“Having lived the life I’ve lived, and seeing the other side, not being afraid to attack what was in front of me has made me happy.”