McGregor Vs Mayweather: Who will be Remembered as a Legend?

On August 26, history will be made with the McGregor Vs Mayweather fight. Two of the greatest fighters of our time will be facing each other in the boxing ring. And millions of people around the world are in absolute awe because of the sheer audacity shown by McGregor to challenge the greatest boxer of our generation and perhaps of all time.

The McGregor vs Mayweather press conferences in July were full of show-off and trash talk. Each fighter was trying to one-up the other with cocky remarks. While McGregor used his smooth verbal onslaught to dominate Mayweather, Mayweather used the power of money and numbers to show his superior status in the world of fighting. He literally showered money all over McGregor to show that he is in his own league.

McGregor has lost three fights in his career compared to an astounding zero number of losses for Mayweather. But this didn’t shake McGregor’s confidence one bit on stage.

Conor has certainly gained a lead in the talking game not only in this fight but all throughout his career. But as they say, talk is cheap. Inside the ring, anything can happen. Come August 26, the McGregor Vs Mayweather fight will reveal who was the better fighter all along.

Conor McGregor: Why Is He So Good?

Conor relies on the power of belief and the law of attraction to master the art of fighting. In an interview, a journalist asked McGregor for his advice on success. McGregor told him, “act and you will become”. This is the law of attraction at its finest. We can will things into existence if our thoughts and actions are aligned with our intentions.

But life wasn’t always so bright for McGregor. He comes from a humble background. His dad was a taxi driver in Dublin and he relied on welfare money to survive in tough times. But fast forward to today, he is living the luxurious life, full of Rolls Royces, mink clothing, and expensive watches, and doesn’t hesitate one bit to show off.

He’s albeit in too much love with the expensive lifestyle. In one press conference, he brought attention to his clothing saying that, “These custom made suits aren’t cheap. This solid gold pocket watch – three people died making this watch.” Oh yes, he likes to show off.

Here are some Conor McGregor quotes that show the power of the great fighter:

I am cocky in prediction, I am confident in preparation, but I’m always humble in victory or defeat.

If you can see it here and you have the courage enough to speak it, it will happen. People believe in certain things but they keep to themselves, they don’t put it out there. If you truly believe in it, if you become vocal with it, you’re creating that law of attraction and it will become reality.

Through years in the gym, through wins, through losses, through life – I just realized that if you say it to yourself and look yourself in the eye and truly, truly believe that not a man alive can beat you, then that’s the way it is.

When I was a little kid, I’d visualize stadiums and even when I was playing football I’d kick the ball against the wall and pretend I scored a goal. I’d be raising my hand and visualize an arena full of fans…I always had these visions of something, I didn’t know what it was. 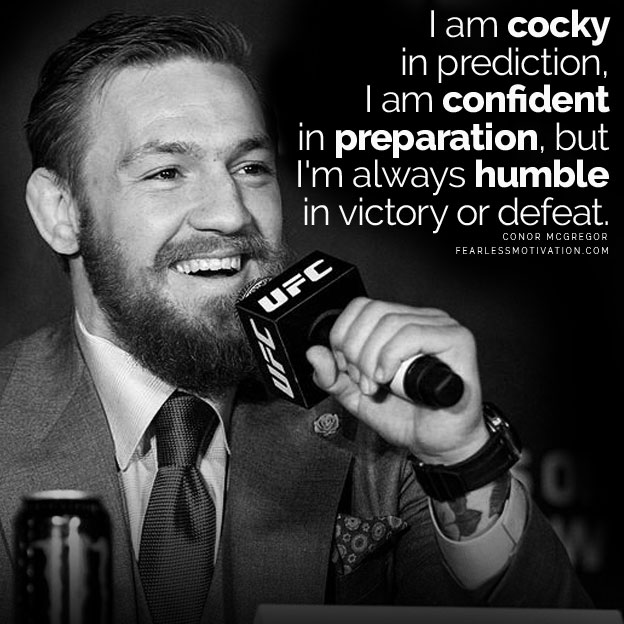 There is no opponent. There’s no Jose Aldo, there’s no noone. You’re against yourself.

They gonna need a fucking army to come take them belts off me.

Floyd Mayweather may not be good at the trash-talking game, but he is certainly the legend when it comes to fighting. His flawless record of 49-0 shines way brighter than McGregor’s 21-3. Mayweather has been undefeated so far, even when pit against the greatest boxers of all time. And truth be told, no fighter can get lucky 49 times in a row. It takes real talent and years of grinding at your craft to reach the level of mastery Floyd has attained.

So does Conor really stand a chance in the McGregor Vs Mayweather fight? Chances are really slim.

We all have seen great athletes like LeBron James, Tom Brady, and even Muhammad Ali – who have ruled in their respective sports. But each one of them had their share of losses. But not Mayweather – this man is as close to perfection as one can ever imagine.

Mayweather has a strong defense inside the ring. And by strong, we mean he’s untouchable. There are talented boxers like Manny Pacquiao, but then there is Floyd Mayweather – he is refined. In the fighting world, talent can be seen often, but the refined movements, the flawlessness, and the absolute finesse- it is only seen in Mayweather.

“Talent is cheaper than table salt. What separates the talented individual from the successful one is a lot of hard work.”

At the end of the day, people may doubt Floyd Mayweather because of his age (he’s 40, if you’re wondering), but there’s one thing they cannot deny – Floyd has made himself untouchable inside the ring with consistent hard work. In fact, his defense is so strong that he never took much beating in his career and was nicknamed “Pretty Boy Floyd” because other boxers’ faces were damaged. But Floyd, being the cocky guy he is and his love for money and the flashy lifestyle, changed his name to “Floyd Money Mayweather”.

Here are some Floyd Mayweather quotes that give a look inside the mastermind that defeated everyone that crossed his path.

You hear certain things, negative things, all the time that aren’t true, but you never hear about the positive.

Once I am in the square circle, I am in my home.

I’ve set the model of showing fighters how they should conduct their business.

I haven’t took no punishment. There’s nothing cool about taking punishment.

There’s no blueprint on how to beat me. 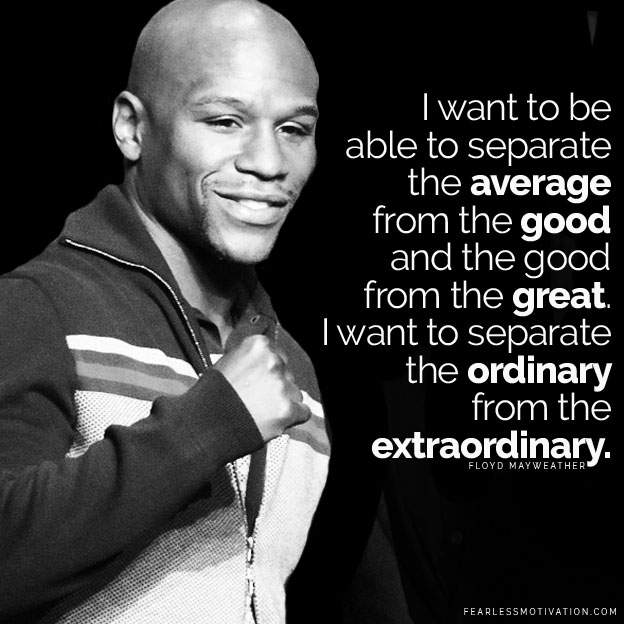 Once I beat a guy, mentally and physically, he’s never the same.

Cotto is a talented fighter but I’m God gifted.

Of course, we all know what UFC stands for – Undefeated Floyd’s Champion.

The ultimate goal is to always break records.

Conor’s confidence stems from his unshakeable belief while Mayweather’s impenetrable defense and a flawless record would make any fighter doubt himself. Some say that Mayweather is going to toy with McGregor, others say that McGregor is going to surprise everyone like he has done earlier with Jose Aldo.

One thing is certain, the McGregor Vs Mayweather fight on August 26 will be a turning point in the legacy of both fighters. If Mayweather wins, Conor’s “unshakable” belief in himself will no longer remain unshakeable. If McGregor wins, the entire sport of boxing will take a massive hit in its face. 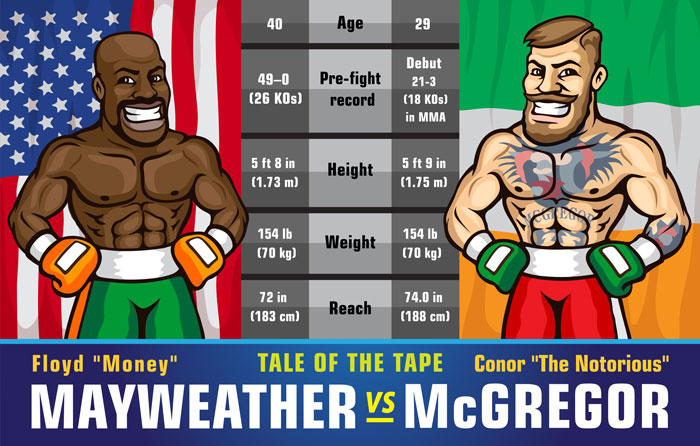