Jack Ma is the founder of the multi-billion dollar company, Alibaba. He is one of the wealthiest people in China but still says he is nothing more than “normal.” Jack suffered from a ton of rejection early in his life but has gone on to achieve greatness. He was rejected from 30 different jobs, including KFC, and rejected from Harvard 10 times.

He didn’t let the rejection stop him. In the mid 90’s he saw the value of the internet and worked diligently to build websites for Chinese businesses. Jack was able to grow his business and create several others before striking it big with Alibaba.

Learn from these Jack Ma quotes to move past rejection and persist when success seems impossible.

“If you don’t give up, you still have a chance. Giving up is the greatest failure.” – Jack Ma Quotes

Giving up is the easiest path in life. Remember, your dreams won’t give up on you but you choose to give up on them. Whenever you set big goals, temporary defeat and obstacles are inevitable. Just because you failed doesn’t mean you are a failure. Choose to persist and if you keep going you will always have a chance to succeed. Quitting guarantees you will never succeed. 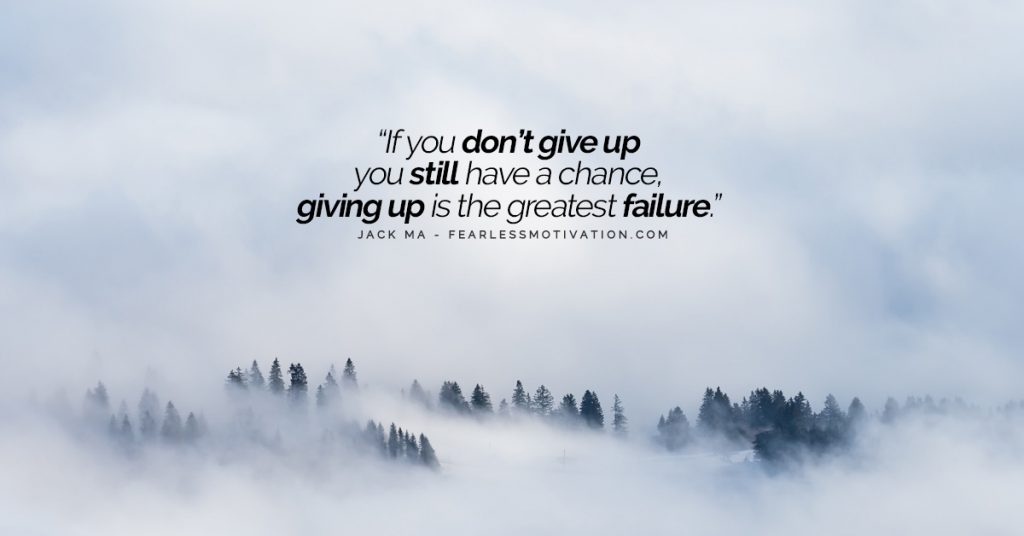 “Instead of learning from other people’s success, learn from their mistakes. Most of the people who fail share common reasons to fail whereas success can be attributed to various different kinds of reasons.” – Jack Ma Quotes

Success is never a good teacher. You will always learn more from your failures than your successes. If you admire someone like Tony Robbins or Steve Job learn how they failed just as much as you learn from their victories. All successful people were once failures. Learn how they got back up and figured out the problem so you can speed up your own success.

“Life is so short, so beautiful. Don’t be so serious about work. Enjoy your lives.” – Jack Ma Quotes

Work takes up the majority of most people’s lives. Most people spend more time at work than with family and friends. But don’t let work take over your life. Learn to enjoy life by being present, appreciating the struggle, and finding joy in any situation. You only get one shot at life, make the most out of it!

“If you’ve never tried how will you ever know if there’s any chance?” – Jack Ma Quotes

So many people have ideas that could change the world but are too scared to try to bring them to reality. You might have an idea or goal that is so big it might feel like a waste of time. Eliminate the belief and give it a shot. In the future, you’d much rather know you tried and failed than never tried at all.

“No matter how tough the chase is, you should always have the dream you saw on the first day. It’ll keep you motivated and rescue you from any weak thoughts.” – Jack Ma Quotes 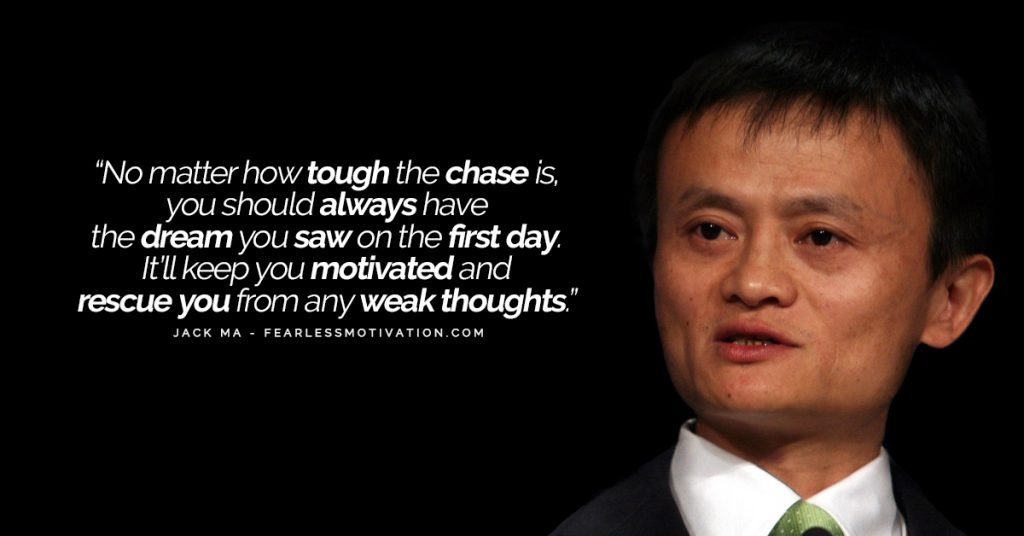 Success is not linear, in any area of your life. Whether you’re starting a business, losing weight, or trying to achieve any big goal. Don’t forget why you started. Remind yourself of your “why” and your vision on a daily basis. This will help you stay motivated through the tough times and keep your goals top of mind. Start each day writing in a journal or create a vision board to always see images of your goals daily.

Use these Jack Ma quotes to never give up, move quickly past rejection, and persist until you reach your goal.