Will Smith Motivational Video and Powerful Lessons on Life

Will Smith has achieved massive success as an actor and a singer. More than just a great actor and singer, Will Smith is a great teacher. His powerful work ethic and a strong understanding of how the world works have inspired millions through his motivational speeches, quotes and belief that you can attract anything you want in your life, if you are willing to ask for it, and work for it.

Here are the top seven lessons from this great Will Smith motivational video as well as some of the best Will Smith Quotes.

1. Greatness Exists in All of Us

Society tells us that we have to go a long way before we can become great. Some tell us that greatness is only for the lucky… But the truth is that greatness exists naturally in all of us. We just have to unravel it. And the way to do that is by introspection, experimentation, and exploration. As David Goggins says, we have to stop being distracted and read our own book, our life story to discover our truths and embark on the path to greatness.

Since we all have greatness, we all have our own talents. But talent on its own isn’t valuable. You have to build skill by working hard at your craft. The most successful people often practice as much as twenty years before they become great. This is perhaps the greatest lesson from this Will Smith motivational video.

For example, Kevin Hart struggled for a total of 19 years before he was recognized as one of the greatest comedians of our time. He says, “I got 19 years of “No. You aren’t good enough!””.

Our dreams can scare us to death. What if we fail? The thing is, we’re looking at the big 5-year or 10-year goal and getting intimidated at the sheer uncertainty associated with it. We need to realize that we don’t have to do it all at once. It’s best to take one step at a time, focus on improvement and not perfection.

As Will Smith said,

“You don’t set out to build a wall. Don’t say ‘I’m going to build the biggest, baddest, greatest wall that’s ever been built.’ You don’t start there. You say, ‘I’m going to lay this brick as perfectly as a brick can be laid. You do that every single day. And soon you have a wall.” 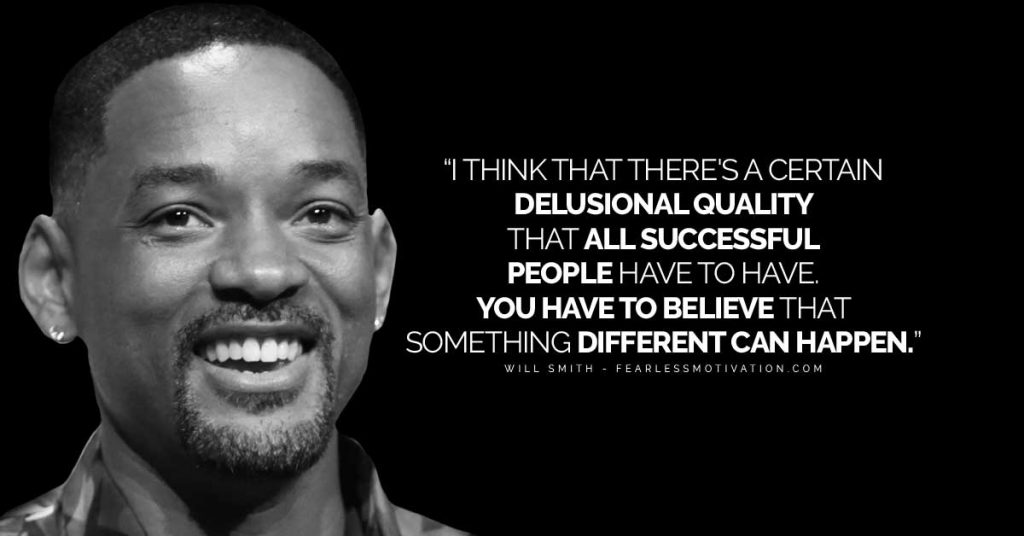 4. Don’t Wait Till Others Believe in You

According to Will Smith, before anyone believes in you, you have to believe in yourself. That’s the only way you put your heart and soul into your dreams. If you understand how the power of belief is harnessed, you’ll know that when we don’t believe in our abilities, we don’t act because of lack of motivation, and don’t reach our goals. Therefore, self-belief is absolutely necessary.

This Will Smith motivational video is great because of such magnificent lessons. Will Smith even says that, “There’s no reason to have a plan B because it distracts from plan A.” And it’s absolutely true. As Confucius said, “The man who chases two rabbits, catches neither.”

5. Being Realistic Leads to Mediocrity

If you are too realistic with your goals, you will aim far below your capabilities. We have human creativity which has the potential to change reality, not for ourselves, but for millions of people around the world.

The Wright brothers made the airplane and it changed the way we travel. Edison created the light bulb and it forever changed how we lived. Don’t set limits on your dreams by what has already happened, trust your gut and believe that you can raise the bar in your chosen field.

“Why would you be realistic? I’m gonna do it, it’s done. It’s unrealistic to walk in a room and flip a switch and lights to come on. That’s unrealistic, fortunately Edison didn’t think so.” 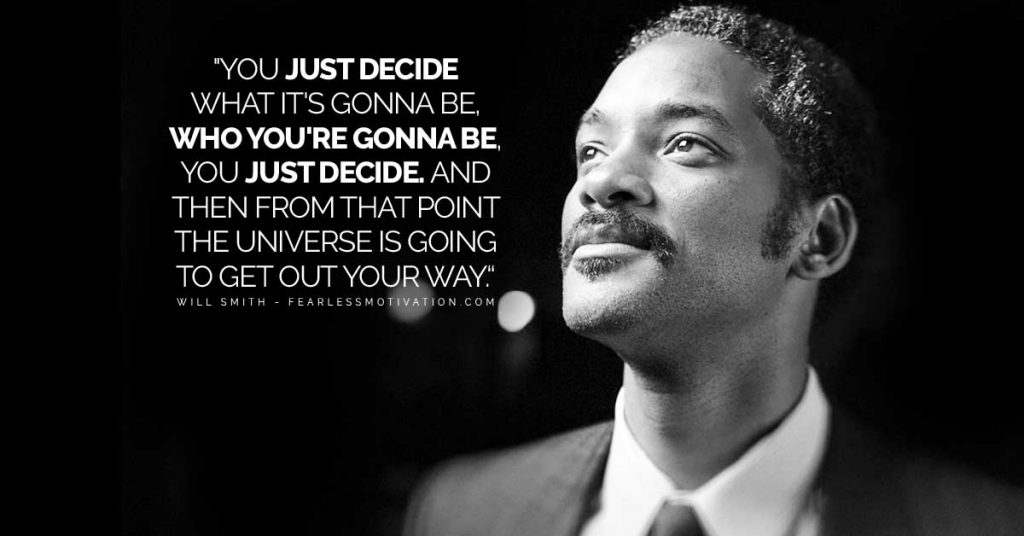 6. Our Thoughts Have Physical Power

Will Smith says that our thoughts and feelings have physical power. When we resolve to do something, it creates a physical thrust in the universe. It shows that we are much more than our physical existence, we are creators capable of putting a dent in the universe.

What a great lesson! This Will Smith motivational video is full of great gems of wisdom.

“Our thoughts, our feelings, our dreams, our ideas are physical in the universe. That if we dream something, if we picture something and commit ourselves to it then that is a physical thrust towards realisation that we can put into the universe.”

Will Smith says that we can put a dent in the universe, the universe is like water, it just moves around whatever comes through. When we absolutely commit on a certain decision, a certain path, the universe will get out of our way.

“You just decide what it’s gonna be, who you’re gonna be, you just decide. And then from that point the universe is going to get out your way. It’s water, it wants to move and go around stuff.”