Rafael Nadal the ‘King of Clay” Born in 1986, on the Spanish island of Mallorca. One of only two men in history to win all four majors and an Olympic gold. Known for his raw athleticism and an incredible will to win. An inspiration to many, as one of the greatest tennis players in history. Below we have listed some Rafael Nadal quotes to inspire you.

1. “If he hadn’t made me play without water that day, if he hadn’t singled me out for especially harsh treatment when I was in that group of little kids learning the game, if I hadn’t cried as I did at the injustice and abuse he heaped on me, maybe I would not be the player I am today. He always stressed the importance of endurance. Endure, put up with whatever comes your way, learn to overcome weakness and pain, push yourself to breaking point but never cave in. If you don’t learn that lesson, you’ll never succeed as an elite athlete, that was what he taught me.”

We all go through hardships, but it’s how we react that defines us. 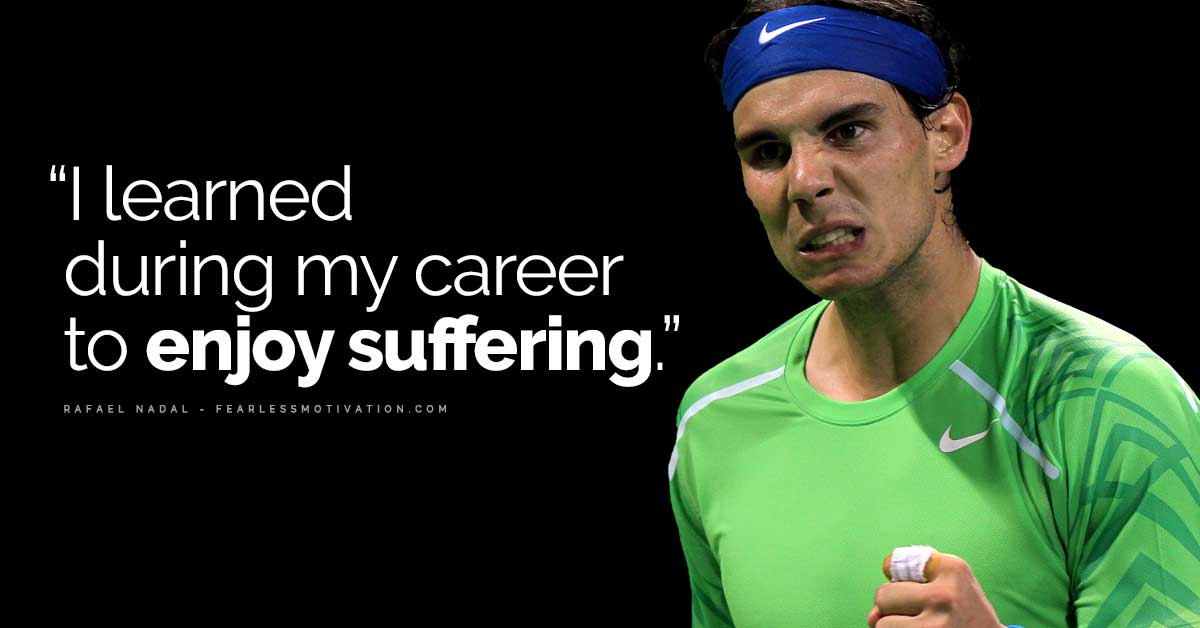 2. “However great your dedication, you never win anything on your own.”

You can’t do it all. Sometimes you will need help. stay humble, stay grateful.

3. “And then, as I was bouncing the ball up and down on the grass, just about to wind up my body to serve, the umpire cut in. “Time violation: warning, Mr. Nadal.” I had apparently spent too long between points, gone over the legal limit of twenty seconds before I served—a rule that is enforced only rarely. But it’s a dangerous rule. Because once you’ve received that first warning, any subsequent violations lead to the deduction of points. My concentration had been put to the test. I could have made a scene. The crowd, I could tell, shared my indignation. But I knew, without having to give it a second thought, that to let my feelings show would do me no good. I’d risk losing that precious asset, my concentration. Besides, the momentum was with me and I was two points away from winning the second set. I put the umpire’s interruption immediately out of my mind and won the point with a terrific and, for me, very unusual shot.”

Focus on the current moment. Things can change in a heartbeat. Don’t let distractions control your mind.

4. “Glory is being happy. The glory is not winning here or winning there. The glory is enjoying practicing, enjoy every day, enjoying to work hard, trying to be a better player than before.” – Rafael Nadal Quotes

Learn to love the process. Know your why. If you want something with every fibre in your being, the work will come much easier.

5. “You fight, you try your best, but if you lose, you don’t have to break five racquets and smash up the locker room. You can do those things, but when you’ve  finished, nothing has changed. You’ve  still lost. If something positive came from that, I probably would do it. But I see only negativity.”

Accept winning and losing with grace, and you will lead a happier life.

6. “My motivation and aspiration is the same, being number one or being number five. So that’s  the truth. And my goal is the same – it’s to always be happy playing, it’s to enjoy the game and improve always.”

Focus on improving yourself every day. Place one brick perfectly every day, soon you will have a wall.

7. “No one is perfect. Everybody does stupid things.”

Don’t beat yourself up for one mistake, the more mistakes we make the more we learn.

8. “I always work with a goal – and the goal is to improve as a player and a person. That, finally, is the most important thing of all.” – Rafael Nadal Quotes

After self development comes success.

9. “To be a friend means that they are always there, for the good or the bad.”

10. “I am a guy who likes to do what I am doing with passion, whether it’s a soccer match with friends or golf.

Whatever you do, give your all.

One of the best lessons you will learn is to stay calm during chaos.

12. “I admire a lot of people, but in terms of sport I’ve always loved the mentality of Tiger Woods on a golf course. I always love his eyes when he is setting himself and focusing on his decision; he has a really strong focus and believes that he can make the shot.”

Even the best in the world have mentors.

13. “For me, it is important to win titles and for that I need to work hard, stay healthy and be able to compete. The rest, I always say, it comes.” – Rafael Nadal Quotes

Health is your most important attribute. Without that you have nothing.

14. “I learned during my career to enjoy suffering.”

15. “He has always been obedient, which is a sign of intelligence in a child because it shows you understand that your elders know better than you, that you respect their superior experience of the world.” – John Carlin

Respect your elders. The right advice will accelerate your ascent. 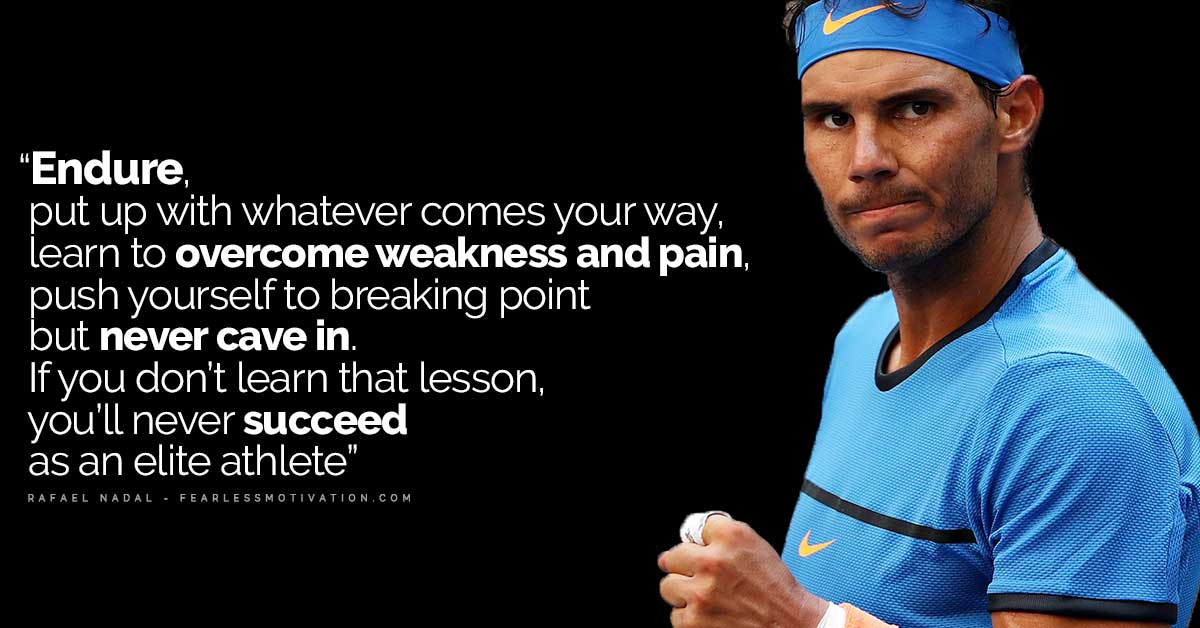 16. “Family is very important. They make me feel good always because if I won, when I started to be famous, the relationship never changed with my friends and family.” – Rafael Nadal Quotes

Never forget where you came from.

17. “All his fears—be they of the dark, of thunderstorms, of the sea, or of the disastrous disruption of his family life—obey a compelling need. “He is a person who needs to be in control of everything,” Pérez says, “but since this is impossible, he invests all he has in controlling the one part of his life over which he has most command.” – Benito Perez Barbadillo

Find your passion and work tirelessly to master it.

18. “The rest of the family looked on with a bemusement that, in the case of Rafa’s mother, occasionally gave way to anger. His father, Sebastián had his misgivings. Rafael his uncle wondered sometimes whether Toni was pushing his nephew too hard. His godfather Juan, went as far as to say that what Toni was doing to the child amounted to “mental cruelty.” But Toni was hard on Rafa because he knew Rafa could take it and would eventually thrive. He would not have applied the same principles, he insists, with a weaker child. The sense that perhaps he might have been right was what stopped the more doubtful members of his family from outright rebellion. One who did not doubt Toni was Miguel Ángel, the professional football player. Another disciple of the endurance principle, in which he believes with almost as much reverence as Toni himself, Miguel Ángel says that success for the elite sportsman rests on the capacity “to suffer,” even to enjoy suffering. “It means learning to accept that if you have to train two hours, you train two hours; if you have to train five, you train five; if you have to repeat an exercise fifty thousand times, you do it. That’s what separates the champions from the merely talented. And it’s all directly related to the winners’ mentality; at the same time as you are demonstrating endurance, your head becomes stronger.” – John Carlin

If you want success you must be willing to do whatever it takes. 90% of people will give up when things get hard. Outlast them. Outwork them.

19. “My theory is that the most important thing is be happy, enjoy what are you doing, and be fresh mentally.”

The key to being happy is knowing you have to power to choose what to accept and what to let go.

20. “Even if I have already peaked, I have to believe I can improve. I wake up every morning, and go to practice, with the illusion that I am going to get better that day.” – Rafael Nadal Quotes

Being content with who you are is good. Working hard to improve is better. Which do you prefer?