Les Brown delivers one of the most epic, motivational speeches ever with his Georgia Dome speech. He was born in an abandoned building in Liberty City with his twin brother and given up for adoption at six weeks old. Growing up he had learning disabilities, was held back twice and declared the “dumb twin” by a teacher in middle school.

But in high school, a different teacher gave him the inspiration to change his life forever and has gone on to achieve massive success. Les Brown is a famous speaker, author, and former politician and TV host.

Here are 4 lessons you can learn from Les Brown’s Georgia Dome Speech:

1. Never Stop Working on Yourself

Les Brown attended many seminars, read tons of books, and listened to countless audio programs on his quest for greatness. While his friends and family doubted all of the content he knew that the best investment you can make is an investment in yourself.

The same goes for your development. Make growing and learning a top priority in your life. Start reading every day, listen to new podcasts and watch motivational videos to always be growing and developing. This type of content will affirm the belief that you can accomplish anything. Learn from others to speed up success.

2. Don’t Worry About Others Opinions

Les Brown was negatively influenced by what others thought about him for most of his childhood. After being labeled EMR (educable mentally retarded) he was depressed, established limiting beliefs, and had a very low self-esteem. But a teacher in high school told him, “Someone’s opinion of you doesn’t have to become your reality.” From that moment on he never worried about what others thought.

3. You Can Live Your Dreams

If you are willing to take a chance and work hard you can live your dreams. It won’t be easy. You will incur a lot of disappointment, failure, and defeats when you run toward your dream. While setbacks can be frustrating know that it’s part of the process. It’s supposed to be challenging or everyone would do it.

As Les Brown said, “Most people raise a family, earn a living, and then they die. But people who are running toward their dreams life has a special kind of meaning.” Don’t settle for mediocrity, choose to chase after your dreams. 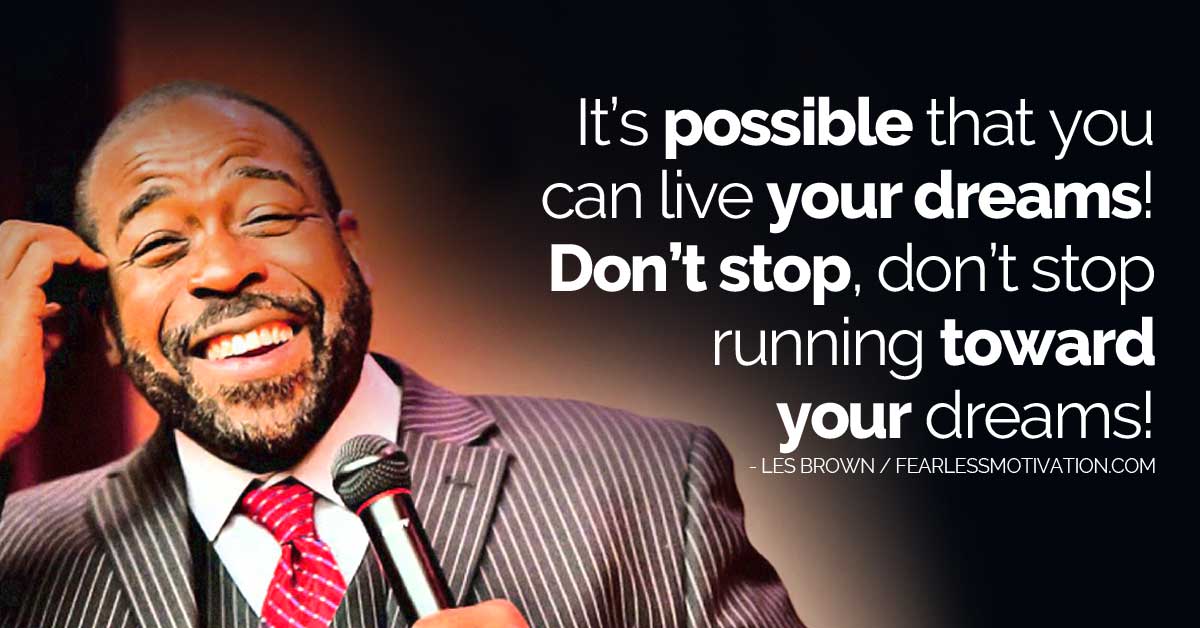 4. Surround Yourself With Winners

Surround yourself with positive, uplifting, and inspiring people. The five people you spend the most time with will influence your success and even your earnings. Choose them wisely. If someone isn’t helping you they are hurting you. Audit your circle to set yourself up for success.

As Les Brown said, “It’s necessary to get the losers out of your life if you want to live your dreams.” When you decide to go after your dreams you will inevitably have doubters. They might even be family and close friends. Don’t let them weigh you down and choose to spend time with people who lift you up.

“It’s possible that you can live your dreams! Don’t stop, don’t stop running toward your dreams!”