It’s not how much money you make, it’s how you make your money. I’ve had businesses where I made millions of dollars, but I wasn’t doing what I loved so I wasn’t happy.
When I first got into business… when I first had the desire to get into business it was because I wanted to have money, because I grew up in an environment where I didn’t have a lot of money.

What I started to realize was the more money I made, the more insecure I was becoming because all I was doing was putting band aids on Chafed skin. I wasn’t actually going into, and fixing the real issues at heart.

I guess it comes down to defining what success means to you.  In the early stages, to me, success was money oriented. And when I wasn’t in pursuit of money and I wasn’t making it, I used to question myself all the time. Am I really cut out to be successful?

For me, once I made the transition from being money focused to being purpose focused, it was an quite an easy transition from there. From there it was more about developing a healthy relationship with failure.

To me your relationship to success is just as important as your relationship with failure. Because you know, success is one of those things depending on how you define it, that not everybody achieves on a consistent basis.  They often assume that… Once I meet the one it will be amazing! But they keep on meeting all these people in between that don’t make them feel that way, because they don’t really have a relationship with what success is, because they’ve never really spent much time with success.

But one of the things that a lot of us do is we spend a lot of time with failure, because everybody fails, that’s how we grow, that’s how we learn, but what I find really curious is people’s relationship with failure.
What does failure mean to people. The thing most people they don’t realize that failure is nothing more than… a sign post. It’s a requirement to identify skills, knowledge and experience, gaps that need to be filled in order for it to achieve success.

But most people look at success in isolation of failure. Whereas for me, they’re one and the same, and if anything, the pursuit of success to me is the pursuit of failure intelligently. How do you pursue skills, knowledge and experience?

How do you pursue activities in a way that identify skills, knowledge and experience gaps in a way that gives you what is required so that you can get one step closer to your goal.

For me that’s what the best piece of advice I’d give anyone is to pursue what you love.

Because if you’re pursuing money, your temperament, your mood, your feelings, will be governed by how much money people will give me in any moment and when you’re an entrepreneur, especially when you start out people don’t want to give you money.

For me, when you start to develop a relationship with what it is that you’re here to do, then the rewards… they come whether you are making money or not.  So the more connected we are to purpose, the easier it is for us to express that potential.

Do what is it that we love and the rewards are in the activity, not in the consequence.

For me, a piece of advice I’d give on top of that is focus on the thing that as a natural consequence produces what it is that you’re looking for. When you focus on money…

What the behavioural science tells us people who focus on money are 8 times more likely to engage in deceit, deception, fault related behaviour because they’re focusing on money.

Whereas what I prefer to do is focus on the activity, which in my case is the purpose, the expression of purpose, done in a really sound and intelligent commercial way,
that as a natural consequence produce money.  As a result I don’t have to focus on money, I just focus on delivering value in a commercially intelligent way and the money takes care of itself.

So, therefore, my decision making process is never compromised by someone waving a dollar bill in front of me. It’s always going to be governed by the things that are actually genuinely important to me because delivering value… when you deliver value in a commercial intelligent way you can’t help but make money. 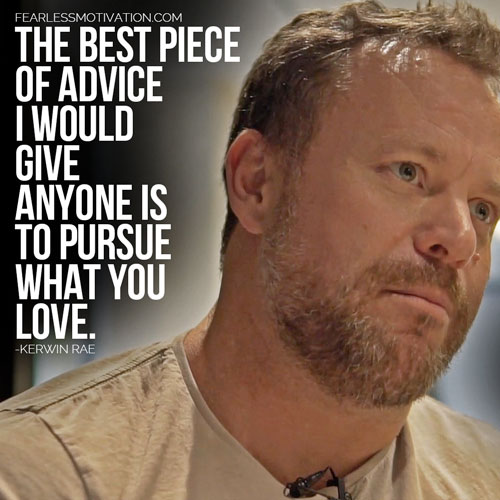