These Al Pacino Speeches Will Leave You Wanting To Conquer The World!

When you think Motivational Speech it is hard to go past one very unique & classic voice – that of Al Pacino.
Al Pacino Speeches have been sending shivers down the spine of millions for many years.
Whether from Any Give Sunday, City Hall, or just about any movie Al Pacino has featured – just about every role has left us with the feeling we can take on the world.
Here are a selection of his greatest speeches, and text version below each.

Al Pacino “Inches” Motivational Speech from Any Given Sunday

I don’t know what to say, really. Three minutes till the biggest battle of our professional lives all comes down to today. Now either we heal as a team or we’re gonna crumble, inch by inch, play by play, ’til we’re finished.
We’re in hell right now, gentlemen, believe me. And, we can stay here — get the shit kicked out of us — or we can fight our way back into the light. We can climb outta hell one inch at a time.
Now, I can’t do it for you. I’m too old. I look around. I see these young faces, and I think — I mean — I made every wrong choice a middle-aged man can make. I, uh, I pissed away all my money, believe it or not. I chased off anyone who’s ever loved me. And lately, I can’t even stand the face I see in the mirror.
You know, when you get old in life things get taken from you. I mean that’s…part of life. But, you only learn that when you start losing stuff. You find out life’s is a game of inches. So is football. Because in either game, life or football, the margin for error is so small — I mean one-half a step too late, or too early, and you don’t quite make it. One-half second too slow, too fast, you don’t quite catch it.

The inches we need are everywhere around us.
They’re in every break of the game, every minute, every second. 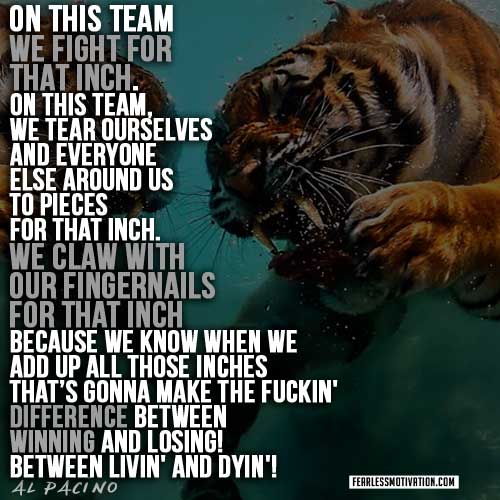 On this team, we fight for that inch. On this team, we tear ourselves and everyone else around us to pieces for that inch. We claw with our fingernails for that inch, because we know when we add up all those inches that’s gonna make the fuckin’ difference between winning and losing! Between livin’ and dyin’!
I’ll tell you this: In any fight, it’s the guy who’s willing to die who’s gonna win that inch. And I know if I’m gonna have any life anymore, it’s because I’m still willin’ to fight and die for that inch. Because that’s what livin’ is! The six inches in front of your face!! 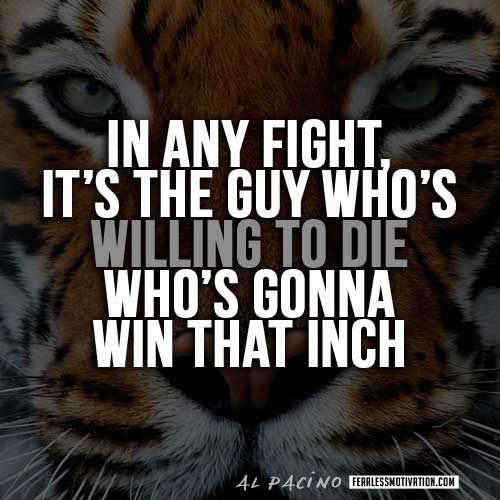 That’s a team, gentleman!
And, either we heal, now, as a team, or we will die as individuals.
That’s football guys.
That’s all it is.
Now, what are you gonna do?

Al Pacino Motivational Speech from City Hall Text
I was warned not to come here. I was warned. They warned me, “Don’t stand behind that coffin.” But why should I heed such a warning when a heartbeat is silent and a child lies dead? “Don’t stand behind” this coffin. That boy was as pure and as innocent as the driven snow. But I must stand here, because I have not given you what you should have. Until we can walk abroad and recreate ourselves, until we can stroll along the streets like boulevards, congregate in parks free from fear, our families mingling, our children laughing, our hearts joined — until that day we have no city. You can label me a failure until that day.

The first and perhaps only great mayor was Greek. He was Pericles of Athens, and he lived some 2500 years ago, and he said, “All things good of this earth flow into the City because of the City’s greatness.” Well, we were great once. Can we not be great again? Now, I put that question to James Bone, and there’s only silence. Yet, could not something pass from this sweet youth to me? Could he not empower me to find in myself the strength to have the knowledge to summon up the courage to accomplish this seemingly insurmountable task of making a city livable? Just livable.

There was a palace that was a city. It was a palace! It was a palace and it can be a palace again! A palace in which there is no king or queen or dukes or earls or princes, but subjects all — subjects beholden to each other, to make a better place to live. Is that too much to ask? Are we asking too much for this? Is it beyond our reach?! Because if it is, then we are nothing but sheep being herded to the final slaughterhouse! I will not go down that way!! I choose to fight back!!! I choose to rise, not fall! I choose to live, not die!! And I know, I know that what’s within me is also within you! 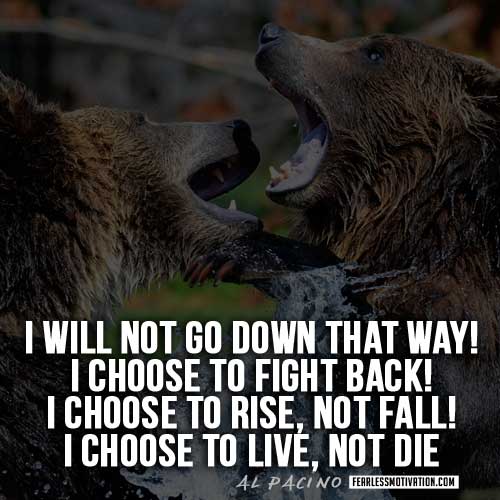 That’s why I ask you now to join me. Join me, rise up with me; rise up on the wings of this slain angel. We’ll rebuild on the soul of this little warrior. We will pick up his standard and raise it high! Carry it forward until this city — your city — our city — his city — is a palace of God! Is a palace of God!

Al Pacino Motivational Speech | Scent of a Woman Text
Trask: Mr. Sims, you are a cover-up artist and you are a liar.
Slade (Al Pacino): But not a snitch.
Trask: Excuse me?
Slade (Al Pacino): No, I don’t think I will.
Trask: Mr. Slade.
Slade (Al Pacino): This is such a crock of shit.
Trask: Please watch your language, Mr. Slade. You are in the Baird School not a barracks. Mr. Sims, I will give you one final opportunity to speak up.
Slade (Al Pacino): Mr. Sims doesn’t want it. He doesn’t need to labeled: “Still worthy of being a ‘Baird Man.'” What the hell is that? What is your motto here? “Boys, inform on your classmates, save your hide” — anything short of that we’re gonna burn you at the stake? Well, gentlemen, when the shit hits the fan some guys run and some guys stay. Here’s Charlie facing the fire; and there’s George hidin’ in big Daddy’s pocket. And what are you doin’? You’re gonna reward George and destroy Charlie.
Trask: Are you finished, Mr. Slade?
Slade (Al Pacino): No, I’m just gettin’ warmed up. I don’t know who went to this place, William Howard Taft, William Jennings Bryan, William Tell — whoever. Their spirit is dead — if they ever had one — it’s gone. You’re building a rat ship here. A vessel for sea goin’ snitches. And if you think your preparing these minnows for manhood you better think again. Because I say you are killing the very spirit this institution proclaims it instills! What a sham. What kind of a show are you guys puttin’ on here today. I mean, the only class in this act is sittin’ next to me. And I’m here to tell ya this boy’s soul is intact. It’s non-negotiable. You know how I know? Someone here — and I’m not gonna say who — offered to buy it. Only Charlie here wasn’t sellin’.
Trask: Sir, you are out of order!
Slade (Al Pacino): Outta order? I’ll show you outta order! You don’t know what outta order is, Mr. Trask! I’d show you but I’m too old; I’m too tired; I’m too fuckin’ blind. If I were the man I was five years ago I’d take a FLAME-THROWER to this place! Outta order. Who the hell you think you’re talkin’ to? I’ve been around, you know? There was a time I could see. And I have seen boys like these, younger than these, their arms torn out, their legs ripped off. But there isn’t nothin’ like the sight of an amputated spirit; there is no prosthetic for that. You think you’re merely sendin’ this splendid foot-soldier back home to Oregon with his tail between his legs, but I say you are executin’ his SOUL!! And why?! Because he’s not a Baird man! Baird men, ya hurt this boy, you’re going to be Baird Bums, the lot of ya. And Harry, Jimmy, Trent, wherever you are out there, FUCK YOU, too!
Trask: Stand down, Mr. Slade!
Slade (Al Pacino): I’m not finished! As I came in here, I heard those words, “cradle of leadership.” Well, when the bow breaks, the cradle will fall. And it has fallen here; it has fallen. Makers of men; creators of leaders; be careful what kind of leaders you’re producin’ here. I don’t know if Charlie’s silence here today is right or wrong.
I’m not a judge or jury. But I can tell you this: he won’t sell anybody out to buy his future!! And that, my friends, is called integrity! That’s called courage! Now that’s the stuff leaders should be made of. Now I have come to the crossroads in my life. I always knew what the right path was. Without exception, I knew. But I never took it. You know why? It was too damn hard. Now here’s Charlie. He’s come to the crossroads. He has chosen a path. It’s the right path. It’s a path made of principle — that leads to character. Let him continue on his journey.
You hold this boy’s future in your hands, committee. It’s a valuable future. Believe me. Don’t destroy it! Protect it. Embrace it. It’s gonna make ya proud one day — I promise you.