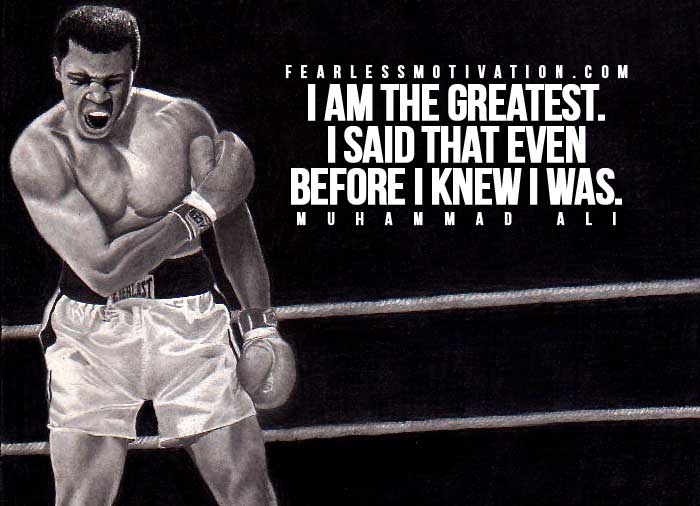 Proclaiming his greatness, even before Ali even recognized his greatness, was a strategic decision. And it can be a worthwhile decision for you too. Here’s why:

Keeping your intention concealed to be the greatest is fine in some cases, but there might not be enough pressure on you to get it done. By proclaiming it, there’s nowhere to hide and you can’t turn back. There’s no other option but to go all in on becoming the greatest. If you proclaim your greatness to your family or friends, they know and will soon be expecting you to personify greatness. Proclaim it on social media and the world will know. Proclaim it in school and your teacher and classmates will know.

Imagine you declare one day in math class to your teacher and classmates, “I will get a 100% score on the test next week.” You better believe you will do everything in your power until the test comes to get that 100%. You will put in the work because you’ll look like a fool to everybody if you don’t get it done.

In his memoir I Feel Like Going On, Ray Lewis notes that during his freshman year at the University of Miami, he proclaimed, “By the time I’m through, I’ll be the greatest player to ever play for the Miami Hurricanes.” Later in a speech to the Miami football team in 2011, he told them, “I did not say that because I thought I was better than everybody else. I said that simply because I was willing to put in the WORK.” Of course Ray Lewis probably would have worked his a** off anyway, even if he didn’t proclaim his greatness. But you bet after proclaiming it, there was no doubt he would put in the work. He proclaimed it and had to stay true to his word.

Note that the idea is to proclaim your greatness before you become great. It would be pointless to proclaim your greatness when you already are the greatest because people already see it. You don’t have to say anything. When you’re on top, people know. You don’t need any re-assurance from anybody, including yourself, to get yourself going to become the greatest. You already are.

Have a big goal you want to accomplish in the future? In some cases it’s best to conceal your intentions, but in others – proclaim it. Put that pressure on you and if you’ve got greatness in you, it will then come out when you put in the work.

Hesitations to Proclaiming your Greatness:

1. You are not willing to put in the work

Muhammad Ali was. Even though he “hated every minute of training”, he was still willing to suffer to become a champion. If you are not willing to put in the work and make the sacrifices to become great or the greatest, then be real with yourself and accept your mediocrity. Stop reading now; you already wasted a couple minutes of your time. 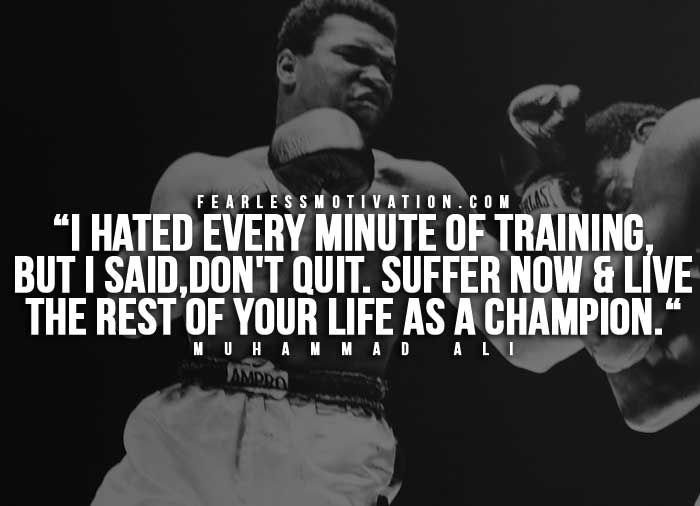 2. You fear you won’t become the greatest even if you put in the work

Rather than go the route of saying, “Don’t fear anything; Be tough; You can do anything”, I’ll acknowledge the reality that fear or doubt can be a valid feeling. If you realistically don’t think there’s anyway you’ll become great even through work, then proclaim something else. Maybe not “Greatness”, but ‘Goodness”. Instead of proclaiming you will get a 4.0 your next semester in college, proclaim you’ll get a 3.5. Instead of proclaiming a big goal such as lifting XXX amounts of pounds on a certain lift, proclaim the goal that you’ll lift 10 more pounds on a certain lift within one month. It’s tough to go from average to great, so it’s fine and probably even necessary to proclaim “goodness” first. But once your definition of “goodness” is reached, why not proclaim “greatness” next and see if you’ve got it in you?

3. You think it is selfish to proclaim your greatness

It is important to note that Muhammad Ali as a boxer plays an individual sport. In his case, he is in control of his greatness and his goal is to win as an individual in the ring. Therefore he uses “I”. But this proclaiming your greatness idea can translate to “we” also. Bill Russell is known as perhaps the greatest champion and unselfish player of all time, willing to do anything to contribute to his team’s success. From his book Russell Rules: 11 Lessons on Leadership from the Twentieth Century’s Greatest Winner Russell writes, “I was the most egotistical player they would ever meet. My ego is not a personal ego, it’s a team ego. My ego demands — for myself — the success of my team.” 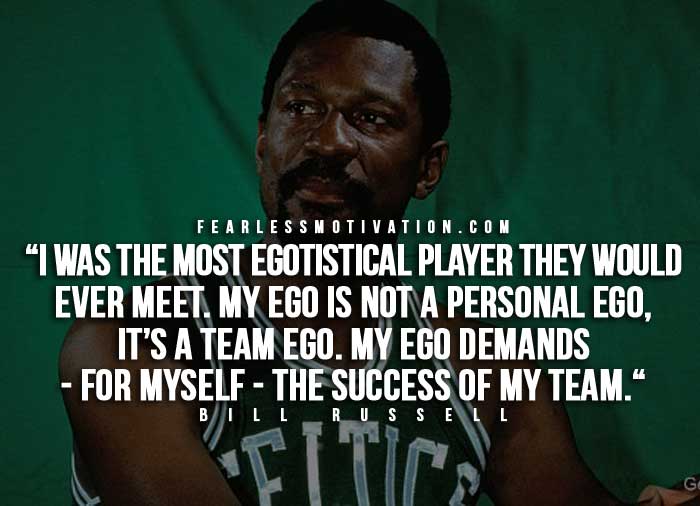 If you work for an organization, proclaim the organization’s greatness and say “we”. If you are talking about your family, say “we”. “We” can have more impact actually because if one person in the group says it, everyone is suddenly pressured to put in the work to become the greatest or to reach that goal.

4. You don’t want to compete with or be compared to others

Even so, you still would want to be “The greatest …. version of yourself”, right? So proclaim it in that way. Publically perhaps, or just to yourself and hold yourself accountable to live up to that promise. If you’re that disciplined enough to keep promises to yourself and be private about your greatness, then so be it. In other words, if you’re like Jim Brown, sometimes proclaiming your greatness isn’t needed. In a radio interview from 2012, Jim Brown said, “I only compete with myself. I never got into competing with different people … Your actions speak for themselves. And if you’re comfortable with yourself, you don’t have to really get into who is the best.” 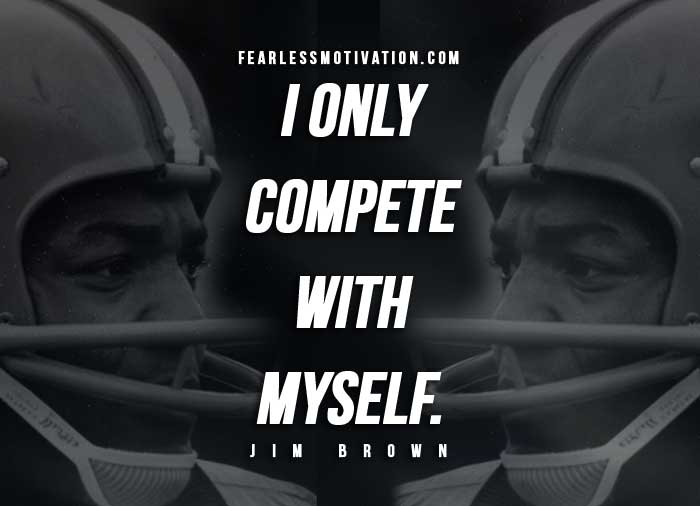 Note that this is not an “all the time” idea. Don’t be proclaiming your greatness in everything to everybody all the time. Be strategic with it. But if there is a goal you really believe you can reach and are dedicated to putting in the work, or need the type of pressure from a proclamation of greatness to get you dedicated, then proclaim your greatness. To somebody. To a group. To Facebook. And if you are using “we” statements when proclaiming your greatness, make sure the other people on your side would benefit from the statement too. Make sure they are willing to put in the work. Make sure they are capable of contributing to your teams or organization’s greatness. 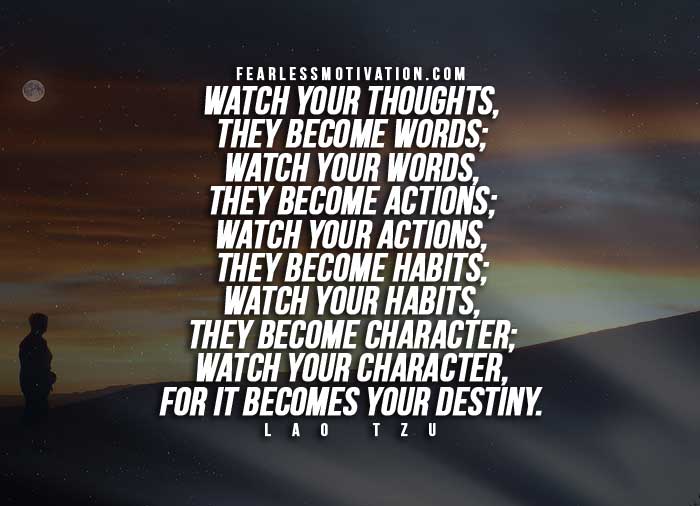 Take note of where you honestly are in the lines above in terms of greatness. Are only your thoughts great? Are only your actions great because you’re not consistent enough with them to make them habits? Are your habits great, but you don’t personify greatness in terms of who you are? Greatness or becoming the greatest starts with thinking you have the potential for greatness and then proclaiming it. Then living it, day after day consistently, to where it eventually becomes who you are permanently. Becoming the greatest involves demonstrating your greatness at every step here. Muhammad Ali used these steps to become The Greatest; Will you use them next?