Battling setbacks and overcoming obstacles throughout his life, Novak Djokovic has become a synonym for mental strength and endurance. The current number 1 tennis player in the world was not born with such mental power, he had to learn it. He mastered the craft of never giving up. Today we’re bringing you inspirational Novak Djokovic quotes. 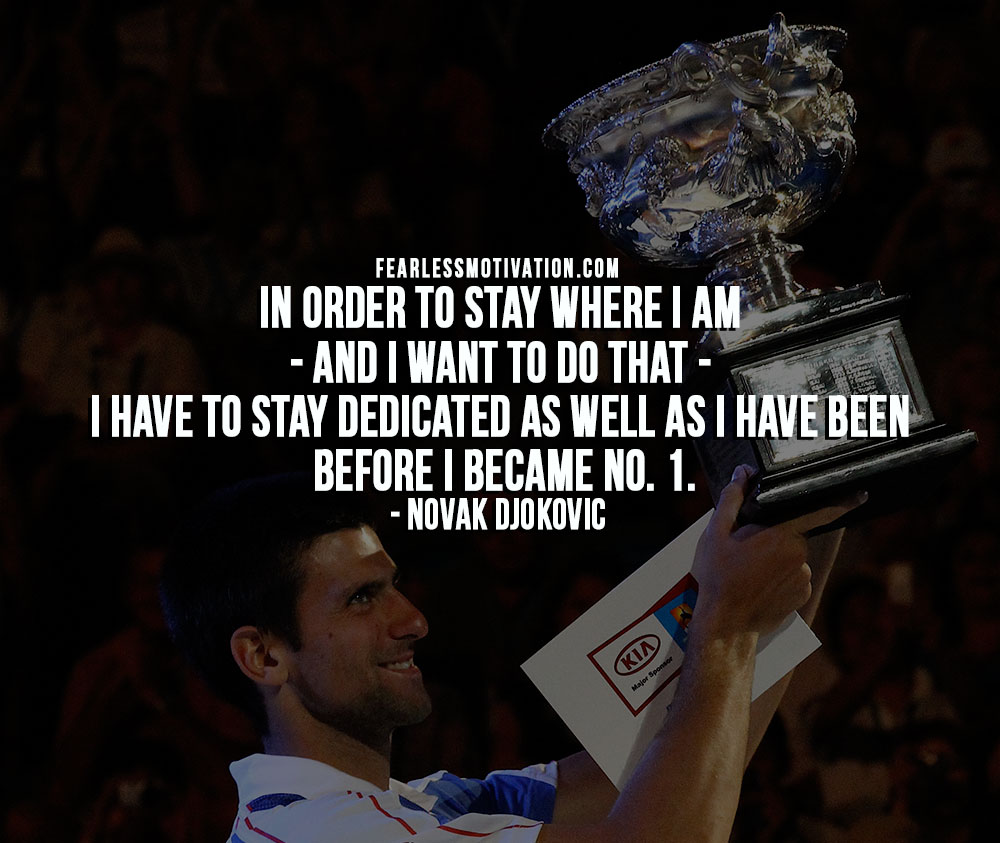 Born in 1987 in Belgrade, Serbia, Novak has had a long journey becoming a champion. He was only four years old when he first picked up the tennis racquet and by the age of 7 he had already developed the hunger for winning. His family provided him with significant support, but Djokovic knew that if he ever wanted to be a champion, he would have to start thinking like one.

Training conditions were awful in Serbia during the 90s; the future Wimbledon winner was forced to have training sessions in a drained out swimming pool. Acceptable tennis courts were scarce, and it was tough to come by with high-quality equipment. When he was 12 years old, the bombing of Belgrade made the Djokovic family hide in the basement for almost three months. Years later, Novak would explain that the hardships of life and the threat of wars in former Yugoslavia actually made his will stronger and served as motivation to battle many challenges later in his life.

Aged 13, Novak moved to Germany where he pursued to upgrade his game and start his youth international career. He went on to be placed in the top 40 junior tennis players in the world by winning five ITF tournaments at the age of sixteen. It was time for the young athlete to join the big league. Djokovic knew he had the potential and from then on it was all about motivation and the desire to win.

In 2005 he entered Wimbledon as a qualifier and made it to the third round, subsequently propelling himself to the top 100 in tennis. After winning his second Masters title in Montreal and beating all of the three top players on his way to the title, Djokovic finished 2007 at number 3 on the ATP list. Not bad for a Serbian kid with only his dreams and hard work to push him forward.

This would already make for a superb tale, but there was more the young dreamer had to show the world. He took his game to a higher level, both on the court and inside his head. 2011 came, and Djokovic had matured mentally as well as physically. The unbelievable winning streak of 43 games without a loss and three Grand Slam titles took Novak Djokovic right to the long-awaited number 1 spot in the rankings.

Today, Novak holds the titles of 11 Grand Slam tournaments along with an Olympic Games bronze medal and a Davis Cup title with the Serbian team. There seems to be no indication that he is even close to pulling the break as he started this year with the Australian Open title, announcing more titles and more brilliant tennis in the years to come.

The ever-smiling child in the body of an adult has made its way to the hearts of many as Novak Djokovic uses his fame and tennis success to help those in need. His skills, his personality and his charisma, have made Novak a role-model for many children taking up their first steps in becoming the best tennis players, and more importantly, in becoming exceptional individuals.

Novak Djokovic Made by Determination