The competitive sports today give us the possibility to see some amazing things. In sports, like in life, the strong survive. The competitiveness and drive take athletes to another level, doing some unbelievable things that they never thought possible. When you have the drive, and you are willing to do whatever it takes, your chances of winning are far greater.

The events you’re about to read about will demonstrate how the underdog can beat the odds and emerge victoriously. Today at Fearless Motivation, we speak about seven biggest upsets in sporting history. All of those remarkable feats of strength, endurance and power of will left a mark in sporting history. When you’re in doubt, questioning yourself and your principle, when it is difficult, think of these moments, and remember that anything is possible. 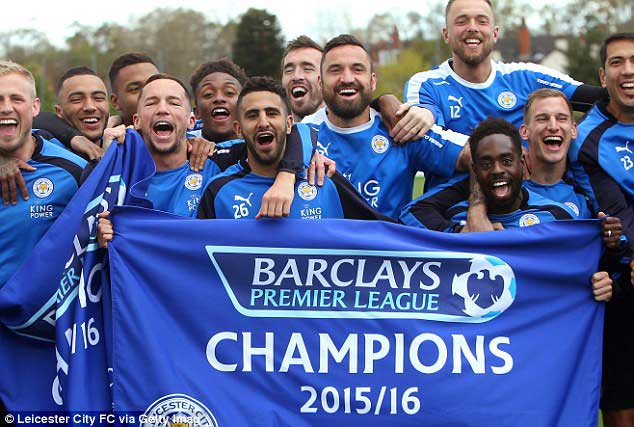 One of the greatest upsets in sporting history happened just recently. The Leicester City football team won the Premier League title by several points, making the headlines of every mainstream media in the world. This team was a candidate for relegation from the league, being one of the three bottom feeders of the list. An interesting fact: Bookmakers made Leicester 5,000 – 1 odds for becoming a 2016 Premier League champions.

Still, the team believed in themselves, and worked hard, one goal at the time. The patient system brought them the possibility to contend for the league title, and the last game of the season that could affect the first position of the team was the game between Tottenham and Chelsea, which ended tied. That’s when the Leicester squad realized they are this year’s Premier League champions. 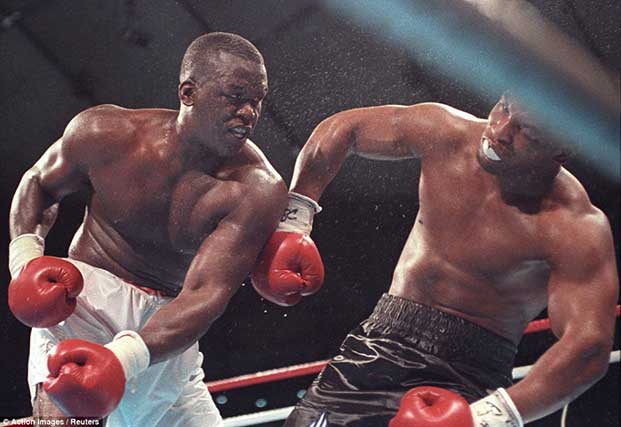 During the 90s, Mike Tyson was a beast. One of the most feared boxers to enter the ring, he stormed the world of professional boxing, taking the heavyweight title and defending it several times. Facing this man was Buster Douglas, a guy nobody expected to win. Even Tyson himself haven’t prepared for the fight since he quickly knocked out every opponent who beat Douglas. The fight was fierce, brutal, and very even, until the round 8, where one-eyed (Douglas closed the other one with his punches) Tyson throw his trademark uppercut and sent Douglas to the ground.

But the winner’s determination in Douglas prevailed. He refused to lose. Refused to stay down.

And two rounds later, gassed out Tyson was barely standing, a perfect opportunity for Douglas. Several punches hit the target, and Tyson was knocked out. 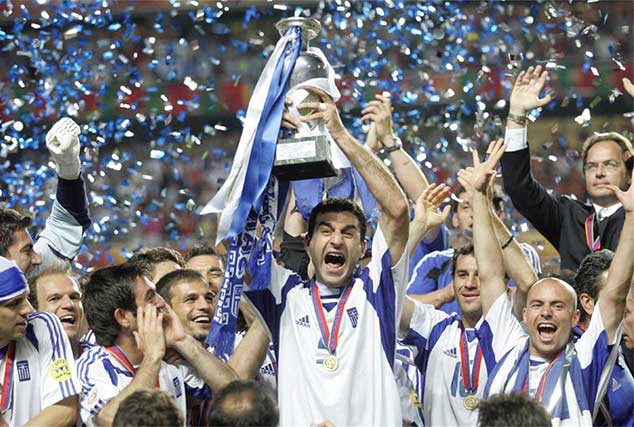 One of the biggest upsets in sporting history happened in the Euro 2004 final game, where Portugal and Greece collided in a tough matchup. Portugal was a big favorite for a gold medal, but it turned out that Greek defense was too tight to penetrate. A rising star forward, Cristiano Ronaldo felt that the most. Greeks managed to score in the 57th minute after a corner (their first at the game), and then they strategically pulled back, tightening the defense tremendously. That strategy played out for Greeks, and they won the Euro 2004, surprising the whole world. 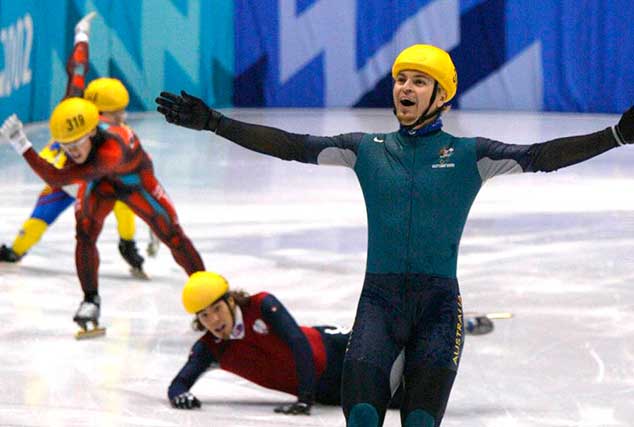 One of the biggest upsets in sporting history happened 2002 Winter Olympics. The short tack speed skating competition was fierce and intense; all competitors were aiming for victory, with the hunger for victory in their eyes. Every skater except Steven Brad (Australia) have lead the race at one point, and changes at the leading place were many.

The last lap came most intensive; Apollo Ohno (USA) and Lia Jiajun (China), the leading contenders for the gold medal collided, with Chinese skater falling and bringing down the three skaters around him. Steven Brad was several feet behind, safe from the collision, and he had an uncontested finish; he just passed by his opponents effortlessly, winning the gold for Australia. 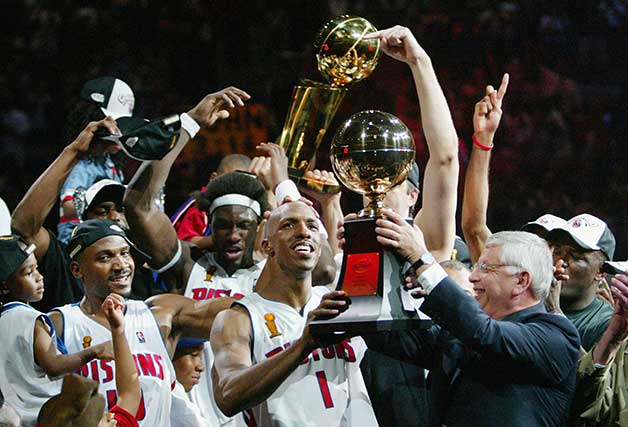 During the 2004 season, Lakers were unstoppable. Shaquille O’Neal and Kobe Bryant played like a well-organized team, there were no injuries to stop them, and they acquired Gary Payton and Karl Malone, two future Hall of Famers, to ensure the championship trophy. They were facing Detroit Pistons, the definite underdog in the matchup. Young Pistons squad had Chauncey Billups at the guard, Richard Hamilton, Tayshaun Prince at the forward, Rasheed Wallace at power forward/center, and defensive beast Ben Wallace at center.

Pistons won 4 – 1, bringing the star-struck Lakers to their knees in the series (all wins by double digits). The connection between Bryant and O’Neal was bad, and on the other hand, the offense of Pistons was flawless. The rest is history. 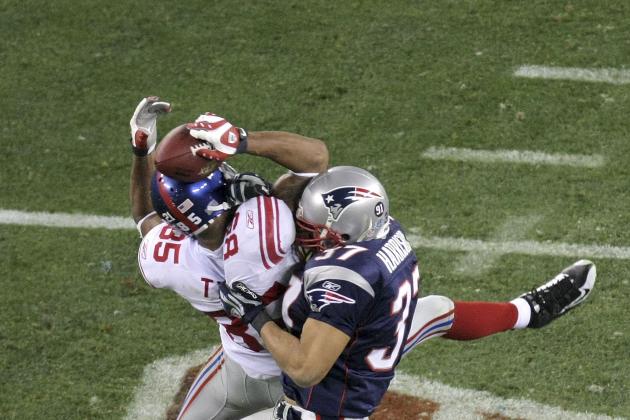 The Patriots had the perfect season, and the Superbowl was the only thing left for them to make it a perfect run. They needed one more win, and the New York Giants were their counterparts in this game. On the biggest stage in the world, Patriots were leading the game until the incredible quarter happened – David Tyree, a wide receiver from Giants, caught an almost impossible pass. He did it while being tackled, falling to the ground, pressing the ball against his helmet, with 34 seconds left on the clock.

The pass was complete, and the Giants gained a three-point advantage (17 – 14) which turned out to be the final result. 12-1 odds were beaten down, and the Giants took away the Vince Lombardy trophy. 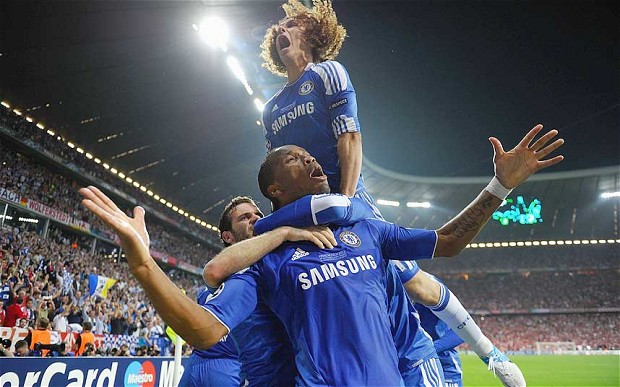 Bayern was unstoppable during the season, and they’ve hosted the Champions League final match in their city. The stadium was packed, and guess who had more fans. The European football fans are thunderous – the atmosphere was crazy.

Bayern was leading throughout the whole game, until the last five incredibly dramatic 5 minutes of the match. First, Didier Drogba scored for a tie; next, Chelsea defender brought the Bayern attacker in the penalty area, within the stoppage time. The dramatic penalty kick didn’t end inside the goal net because goalkeeper Peter Cech saved the shot with masterful skill and agility. After the extended time, penalties decided the winner, and Chelsea players showcased calm nerves, concentration, and executed perfectly.

The Underdog Motivational Speech | Download or Stream to any device, worldwide!
Available on iTunes | Google Play or Amazon MP3

Share your thoughts on the biggest upsets in sporting history. Have we missed some underdog greatness?