“Most People” – Motivational Video For The Minority

If you truly want more out of life, chances are you’re not really going to fit in anywhere… I mean really fit in.
Because the majority of people, settle for average, and if you don’t drop down to their level – there’s going to be conflict.

They won’t like the fact that you are committed to your dreams, because it reminds them that they gave up on theirs.

They might start saying ‘you’ve changed’ since you became successful – not understanding that your goal was ALWAYS to change. To develop. To reinvent yourself!

Successful people are not greedy, it may be possible there exists some financially rich human beings that are greedy, just as there are some broke humans who take advantage of others – should we then assume all broke people take advantage of other humans, should we pigeon hole them as well?   Of course not.   But many people who have not realized their dreams like to point the finger at those that have made it, and assume they got lucky, or they trod on others to get there.

So much negativity toward the successful – and the sad part is, they will never be successful with this mentality.

Successful people did not fall out of the sky and drop into a lovely rainbow full of gold bullion.

You ask 99% of successful people how they achieved their dream life, and I can assure you the story will be the same:

* They worked harder than the majority.
* They kept going when the majority gave up.
* They suffered through failure, but made sure that was not the end, rather a lesson learned.
* They went through hell, but always focused on the end goal.

Only a very small percentage of humans understand this. Very few respect the successful and their hard work, sacrifice and dedication.

Sadly, MOST PEOPLE WOULD RATHER ARGUE FOR THEIR LIMITATIONS, than KNOW there are NO LIMITATIONS

MOST people would rather hate on the successful, than LEARN from them. Than model them.

MOST people would rather pick up a beer, rather than a book.   Then they complain they are in a dead end job, or complain they got laid off from their job… but if they made the right decisions early on, they wouldn’t have to clean up their bad decisions later on.

If you are most people, commit right now to becoming the minority!

SET YOUR GOALS. RIGHT NOW! Don’t you waste another moment of your life!

FIND A MENTOR. In a book or in person. And LEARN from them. Model them. READ. Develop your mind. Re invent yourself. MAKE A COMMITMENT TO BE DIFFERENT!!

MOST people would rather pick up a beer, rather than a book. #FearlessMotivation Click to Tweet
They start saying ‘you've changed’ not understanding that your goal was ALWAYS to change. Click to Tweet
Make a commitment to #NEVERGIVEUP Your FUTURE SELF is begging you to make that commitment. Click to Tweet 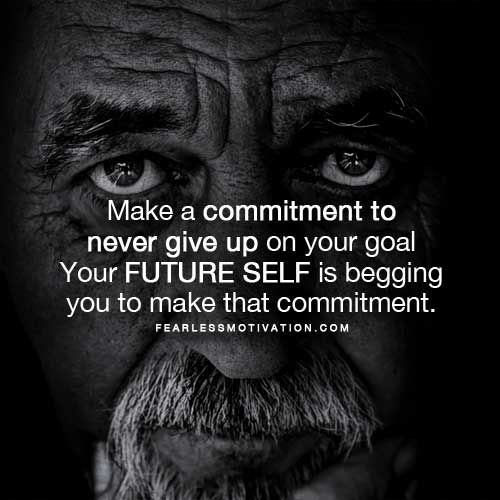