It’s the little details that count.  That one little bit extra, repeated, time after time. That extra hour. The extra reps. The extra little bit of effort.  That little extra, with consistency adds up to a MASSIVE DIFFERENCE.

Let me talk to you today about the principle of ONE THING.

Committing every day to do ONE THING extra that will take you closer to your dream life. Closer to that big goal you have.

Now, before we begin it is most important that you first have A VERY CLEAR picture of your dream life.  A clearly defined goal.  After all, you can’t hit a target you can’t see. And you certainly won’t arrive at your destination if you don’t know where that place is.

So, take a moment, a day, a week, however long it takes for you – and write down very clearly what your perfect life would look like. What would your health be like?  Your energy levels?  Your physical body?  Define it clearly. What would your relationships be like?  Friendships, love? Everything – define it clearly. How much money would you be earning?  And how would you be earning it?  What would light you up and pay you well at the same time. Be very specific.

Now you have your targets… but how are you going to hit them? Let’s start by committing every single day, to do ONE THING that will take you closer to each major goal you have in life.

No matter how small that step will be. No matter what disasters and obstacles step in your way.  No excuses. Commit this to yourself. This is your life we are talking about, nothing is more important!

The principle behind this commitment is to build momentum. It is also to build a habit of consistency, a habit that you will find in all successful people.

It’s always just that little bit EXTRA that makes a big difference in the end.  Just that ONE THING done every day that adds up and compounds on itself, until one day you don’t recognize the person you see in the mirror.

The changes can be that great! But only if you make the commitment. Are you prepared to make that commitment?
MAKE A COMMITMENT to go 100% ALL IN!

It’s the little details that count. That one little bit extra, repeated, time after time. That extra hour. The extra reps. The extra little bit of effort. That little extra, with consistency adds up to a MASSIVE DIFFERENCE. 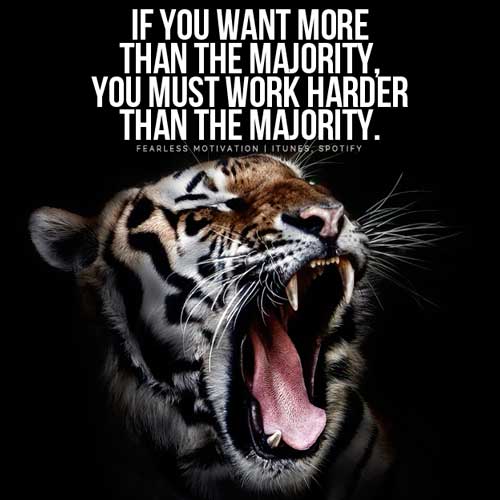