17 Motivational Quotes For Athletes By The Greatest Champions – The Mindset Of A Winner!

Get inside the mind of a champion, inside the minds of the greatest athletes of all time. Learn what makes the best athletes tick, and how you can apply that in your own sport, and in your own life.
Hard work, sacrifice, dedication, consistency and the ability to never accept defeat are some common themes among these great champions. Enjoy these Motivational Quotes For Athletes By The Greatest Champions In History.

1. “There is no way around hard work. Embrace it. You have to put in the hours because there’s always something which you can improve.” – Roger Federer 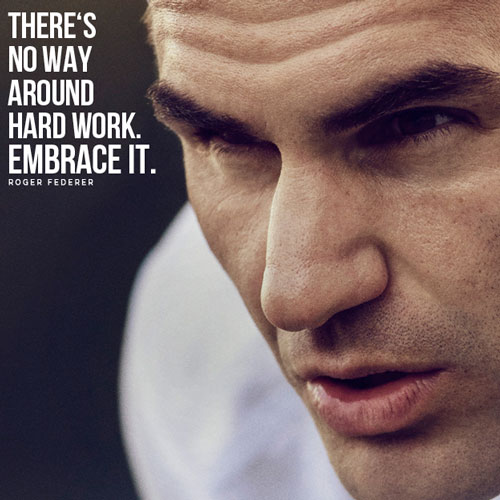 Dreams are free. Goals have a cost. While you can daydream for free, goals don’t come without a price. Time, Effort, Sacrifice, and Sweat. How will you pay for your goals? – Usain Bolt

2. Dreams are free. Goals have a cost. While you can daydream for free, goals don’t come without a price. Time, Effort, Sacrifice, and Sweat. How will you pay for your goals? – Usain Bolt

Are you prepared to put in the work required to achieve your goals? Are you prepared to sacrifice for your dream? Most people in life dream of becoming successful, dream of becoming the next great champion, but very few are willing to put in the time, effort and sacrifice that the greatest athletes are willing to. Are you willing?

3. If you can see it here and you have the courage enough to speak it, it will happen. People believe in certain things but they keep to themselves, they don’t put it out there. If you truly believe in it, if you become vocal with it, you’re creating that law of attraction and it will become reality. – Conor McGregor

Conor McGregor is a big believer in the Law Of Attraction. Regardless of whether you believe in it or not, one thing is for sure: You will NEVER achieve anything in life if you don’t BELIEVE you can. If you don’t believe you can, you won’t even try and therefor will never succeed. All the greatest champions have this in common: They believe in themselves.

4. “The best decisions aren’t made with your mind, but with your instinct.” – Leo Messi

Whenever you need to make a decision in life, always go with your gut. You are the ONLY person that knows what is best for you, on and off the field of play. Follow your intuition and take full responsibility for your life.

5. “I’ve never tried to hide the fact that it is my intention to become the best.” – Cristiano Ronaldo

Many of the greatest athletes in history aren’t lacking in the confidence area, and Cristiano Ronaldo is sure one of them. Some might say Ronaldo is arrogant, but that level of certainty is what made him who he is, and the great player he is today. Confidence, certainty and an unshakable belief in yourself are all needed if you want to reach the highest level. 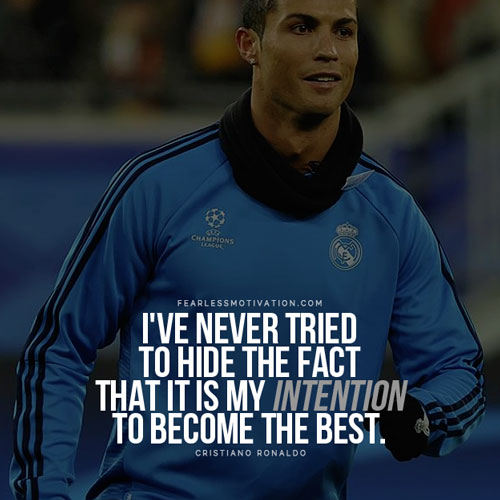 6. “I really think a champion is defined not by their wins but by how they can recover when they fall” – Serena Williams

Many people seem to think successful people don’t suffer set backs, when in reality, they suffer more and larger defeats than the majority. If you are pushing the limits of what is possible in your sport, or your life, you will fail. You will fall. You will be defeated. The true test of a champion is their attitude after they lose, their character in defeat. Do you have the strength to get back up when life has beaten you to the canvas? 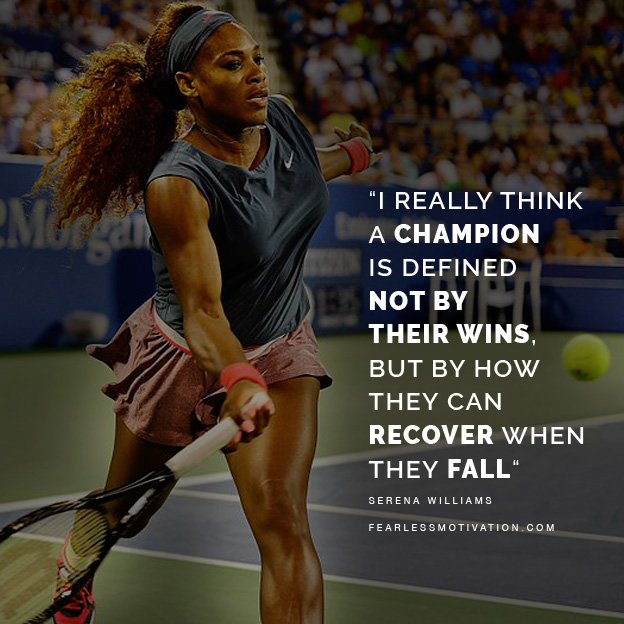 7. “Strength does not come from winning. Your struggles develop your strengths. When you go through hardships and decide not to surrender, that is strength.” – Arnold Schwarzenegger

There’s a lot said about struggle these days. Every great teacher will tell you your struggle develops your greatest strengths. Our greatest pains can be our greatest blessings, and they will always reveal our true character. Be one of the few that RISES in the face of challenges.

8. “If you want to be the best, you have to do things that other people aren’t willing to do.” – Michael Phelps 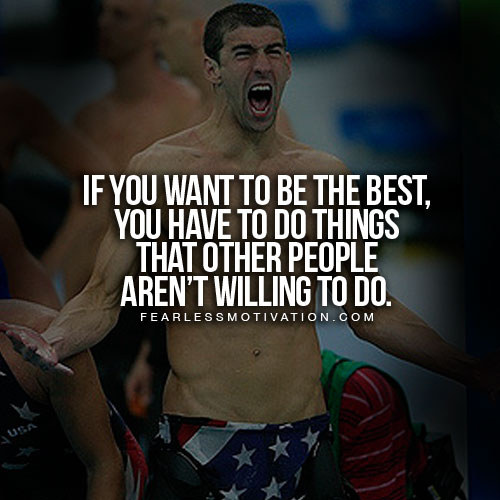 Pressure creates diamonds and pressure creates champions. It is pressure that will make or break you. Will you stand up in the face of a challenge, or buckle like most do?

10. “You must expect great things of yourself before you can do them.” – Michael Jordan

Napoleon Hill once said “Whatever the mind of man can conceive and believe it can achieve” – If you believe in yourself enough to EXPECT great results of yourself, you are already miles in front of all of those who don’t.

11. “I hated every minute of training, but I said, ‘Don’t quit. Suffer now and live the rest of your life as a champion’.” Muhammad Ali

Failure is nothing but a lesson to the master. There really is no such thing as failure if you keep going, come back stronger and WIN, in the end.

Preparation. That is where the game is one or lost. That is where success is gained or never seen. As Will Smith once said – “Stay ready, so you don’t have to get ready” – Prepare so NO ONE can take what is yours. Prepare so success can never be taken from you.

One thing is for sure: You will never reach any great level of success without commitment. Being committed means you put your goal, your dream, before ANYTHING. It means you keep pushing when you don’t feel like it, when you’re tired, when it’s not going well.

Legendary American Football coach Vince Lombardi said it best. We all get knocked down, in sport and in life. Those that get on and make a name for themselves are those who get up, learn the lesson, fight back and come out stronger than ever before.

16. Success at anything will always come down to this: focus and effort. And we control both. – The Rock

Get clear on what you want in your life. Be very specific. Once you know what you want FOCUS all your attention and effort into bringing it into your reality. Don’t get sidetracked by meaningless things. Know what you want. Learn how you can get it. Get your blinkers on and work your ass off until you do get it!
Ok, so the rock was never one of the greatest athletes in history, but he is a beast, a machine, and in our eyes he is still one of the greats!

17. Everyone has a plan, until they get punched in the face – Mike Tyson

For most people, everything is just fine,  until LIFE punches you in the mouth!   Everyone shows great character,  until something goes wrong!

Are you going to show your character when life punches you in the mouth? Will you get back up, will you FIGHT BACK?
Will you be strong, or will you be out for the count? Give up like the majority, or SHOW CHARACTER like the minority?