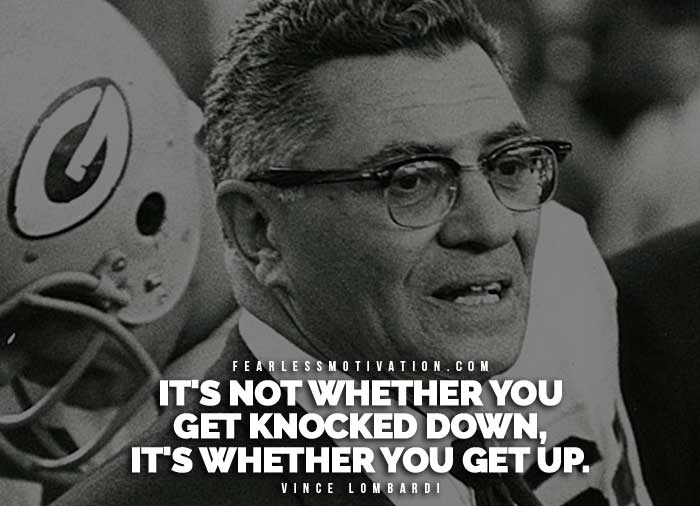 Vince Lombardi is the most legendary coach in the history of football. He won the first two super bowls ever and led the Green Bay Packers to the NFL championship five times in seven years during the 1960’s.

He’s well known for his motivational abilities and intense knowledge about the game of football, and the lessons he lived by were detailed in a recent book titled The Lombardi Rules: 26 Lessons From Vince Lombardi. Here are a few of the guidelines he liked to keep:

1) Work Harder than Everybody

Do more than somebody else is willing to do and you’ll end up winning. “Run it again” wasn’t just something Vince said to the team during practice, it was the way he lived his life.

2) Be Prepared to Sacrifice

We all have to sacrifice something, whether that’s comfort, time with family, or diet restrictions. We must pay the price. Lombardi says we got to pay a price for anything that’s worthwhile.

We might not ever achieve perfection, but the pursuit of it alone will make us excellent. Chasing perfection is both a necessary and frustrating part of life.

The Lombardi code states that you can only become a leader after developing your character. Doing so requires knowledge about yourself, so get to know what makes you tick. You can’t improve something you don’t understand. Think about your strengths, weaknesses, and personal goals. What do you want to accomplish?

Talent only gets us so far. Commitment is needed to persevere through the tough times and not give in when things seem dire.

Belief in ourselves is a must, but we can’t cross the line into arrogance.

Don’t wait for your opponents to make the first move. Get in gear and be assertive when it comes to your training and goals.

Don’t be swayed by minor setbacks. As Vince said before, perfection isn’t attainable, so it’s only natural to fail. Don’t confuse minor shifts with big changes. A bump in the road is just a bump in the road.

10) Look The Truth Straight On

Goals built on half-truths fail in the long run. So, don’t fake it. People know dishonesty when they see it. Vince Lombardi once said, “The successful man is himself. To be successful, you’ve got to be honest with yourself.”