This Is The Number One Reason Why Most People Never Change – Motivational Speech by Fearless Motivation – WATCH FREE:

The thing you must understand is that everyone listening to this has the same amount of time each day…   Very few people use that time wisely.   Most people make very poor use of their time, yet, they still complain about where they are in life… as if it were someone else making their decisions.

While we don’t all start with the SAME opportunities, we ALL live in an age of UNLIMITED opportunities.   If you have an internet connection, and the DESIRE to do anything… you can figure out how to do it.

If you are searching for it, you can find reference for millions of people who started with NOTHING and built their dream life.   So, why can’t you?   There are no valid excuses.

So, what is the number one reason?

It’s YOU.   And more specifically: It’s YOU being OPEN TO CHANGE… and WANTING to change.

Why?   They’re not open to change.   They haven’t made CHANGE important enough and they don’t want change bad enough.

Their comfort is more important than CHANGE.   And look, often it’s not their fault. Most of the time it comes down to conditioning. They’ve never had an EXAMPLE that a greater life is possible.   Most of the time they’ve spent their entire life seeing lack… and having family and friends reinforce that lack by their example.

Well, it’s time to drop that excuse!   Because now you KNOW it’s not the truth!

You know the TRUTH! THE TRUTH IS ANYTHING IS POSSIBLE…  And if it’s going to happen it’s up to YOU!

Whatever has been conditioned in you, can be conditioned out of you… with RESULTS.   With a commitment to LEARN!  Followed by a personal OATH TO NEVER QUIT!  Followed by RELENTLESS ACTION!

Repeat this to yourself:

Think about those companies who post challenge results of their clients… You know… Bob lost 10% body fat and put on 600 pounds of muscle… Mary went from a size 20 to a size 6…   That’s great, but it wasn’t the company who got them the results. It was the individual who was open to change and WILLING TO WORK FOR IT.   The company may have the best programs in the world, the best trainers, the right mix of support and hardness, but if the INDIVIDUAL isn’t open to change…   they’ll just use that as another excuse as to why “they can never change”  . With every great result there’s many more who get no results.   Same programs… same opportunities… but some REALLY WANT TO CHANGE and some aren’t open to it and aren’t willing to WORK FOR IT.

Some make it a MUST!  Some would rather die than remain the same!

You have to make it a MUST!  You must set goals, lock in and FOCUS.  You must FIGHT FOR WHAT YOU WANT!  “I’d rather die than remain the same!”

If you’re open to change – You will change.  If you’re open to learn – You will learn!   No, it won’t always work out. Understand that. But ask yourself what you would prefer:   100 failures on the way to achieving your greatest life,  or no failures while always living a life less than you’re worth!

I know you wouldn’t be listening to this if you were OK with setting another example of lack.

Here’s a formula, if you’re open to accept it, that will guarantee change in your life.

The formula is a very simple 3 step process:

First: You acknowledge where you are is not good enough, then write down and FEEL all the pain that will occur in your life in the future, if you DON’T change this.

Second: You make a PLAN and you set GOALS!  Write down:  What must you do to make this change?  What have you been putting off?  What massive action do you need to take, to get you locked in?  What specific END RESULT must you get and BY WHEN?

All in. 100%. No excuses. No BS. Just pure dedication until you get the life you must have. 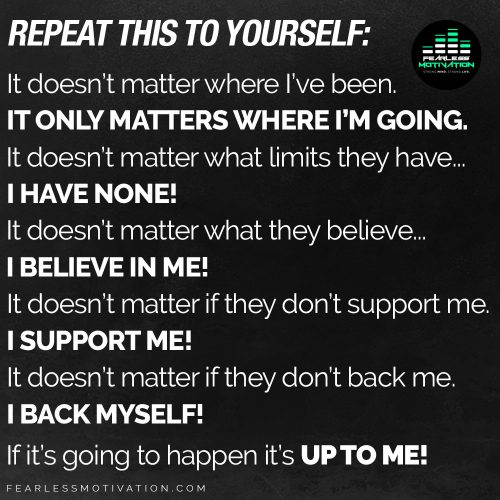 You have to make it a MUST!  You must set goals, lock in and FOCUS.  You must FIGHT FOR WHAT YOU WANT! Click to Tweet