Without discipline there is NO SUCCESS. Here’s why…

You Won’t Always Be Motivated You Must Learn To Be Disciplined – Motivational Video by Fearless Motivation – WATCH FREE:

Goals on the road to achievement cannot be achieved without discipline and consistency. Do you understand?

Between GOALS and ACHIEVEMENT are DISCIPLINE and CONSISTENCY.

Discipline.   It’s one of the key elements of success in EVERY area of life.

Without discipline there is no greatness. This is not my opinion… this is fact. This is fact that has been proven by several scientific tests.

One of those tests was by a man named Walter Mischel… a professor at Stanford University who developed the now famous marshmallow experiment.

The marshmallow experiment was a series of studies conducted with a children to test their discipline and delayed gratification.

The children were offered one marshmallow… but with a catch….

They were allowed to eat the marshmallow… but they were told if they waited approximately 15 minutes they would get a second marshmallow.   In follow up studies, the researchers determined the children who showed discipline, and were able to wait for the delayed but bigger and better reward, went on to have better life outcomes.   Better education. Better health. Better finances.

Now, it’s easy to dismiss this test by saying they’re only kids… but think about your life … or many adults you might know… maybe even yourself.

How many times do most human beings choose the easy or fast option that is available now… rather than waiting for the bigger reward?

I’ll tell you… it’s most people.

Successful people do whatever it takes now to ensure an easier life later.

Let me give you an example most people can relate to. Diet.

You might say, but I have no discipline with my diet? What do I do??

How to develop that discipline?

And on the reverse side, if you do have discipline, that will reflect in a positive way in your health, energy and physical appearance.

But why do some people seem to be able to easily apply discipline to their food choices and some continually struggle with it?

Those who lack discipline in any area have NOT made the end result important enough.

Example: Mary struggled with her diet for years, she tried diet after diet… program after program… but was never able to maintain the discipline to make a lifelong change.   That was, until she was told by her doctor that if she didn’t lose 50 pounds immediately she was at great risk of having a heart attack…

Having 2 kids and family and friends who she loved dearly, suddenly Mary had a powerful reason to change.   Suddenly she HAD TO make it a priority.

She was overweight before and SHOULD HAVE made the change… but without linking that powerful reason in her conscious mind she had no LEVERAGE to make the change and maintain the discipline.   She had to link death to the unhealthy food to stop the cycle.

Don’t be most people. STOP and think about all the reasons YOU MUST CHANGE… and all the reasons you must maintain that discipline.   You don’t have to wait for a life-threatening diagnosis in order to change. DECIDE TO CHANGE NOW.

Think of all the pain that will occur in the future if you don’t change… and the amazing life you will live… and the positive impact you will have on people you love WHEN you do change!

Link pain to the things that cause you future pain….  And link the positives that will give our future positives.

The people that fail to maintain a disciplined lifestyle don’t know what they are doing it for.  They have no goals and no targeted end result.

Just like the marshmallow test, if you haven’t linked in your mind the BETTER RESULT coming in the future… you’ll most likely take the easy option now, rather than wait or sacrifice for the better option later.   You must have clear goals and deadlines.

Back to the diet example:  If you have a clear target weight, body fat percentage, or body image that you must reach within 12 weeks you will be far more likely to stick to your diet, than someone who has no specific target or goal.

Having clear goals is no different! Without clear direction you will end up in the wrong section!

they never understand that their LIFE will continue to be hard UNLESS THEY CHANGE THEIR APPROACH.

Set your goals. Make them clear. Make them meaningful. Give them deadlines.

SELF-DISCIPLINE IS A KEY INGREDIENT to the success mix.   It might well be THE MOST IMPORTANT PIECE.

Conquer your self. Show your discipline.

When you practice consistent acts of discipline you are sending a message to your sub-conscious that you are in-charge.   You are not being run by habit, or by automated activity like most people.

YOU RUN THE DAY. YOU ARE IN CHARGE!

Jim Rohn once said  : “We must all suffer one of two things: the pain of discipline or the pain of regret or disappointment.”

Don’t let it be the latter.  Suffer the pain of discipline now… so you can enjoy your results… so you can love your life, LATER. 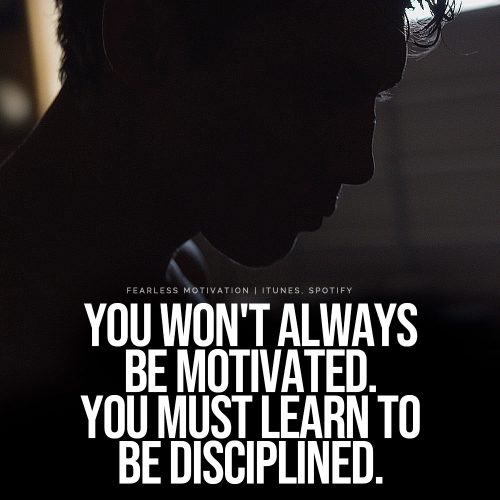