Freedom can only come to those who are willing to EARN IT.

Why are you prepared to risk everything for that dream that no one can see but you?   Why would you prefer to put in 80 hours a week for your own dream, just so you don’t have to put in 40 for someone else’s?…   FREEDOM.

FREEDOM. Because you will NEVER get that freedom working for someone else.   You’ll never be IN CONTROL working for someone else.   Going your OWN WAY is your ONLY SHOT at FREEDOM.  Going your OWN WAY is the only way you get to call the SHOTS.   It’s much harder that way, and the chances of success are very slim… but you have NO CHANCE of getting that freedom if you SETTLE.

If you want freedom you are going to have to EARN IT.
Work until you can say:  I’m living life on my terms!  I CREATED THIS! 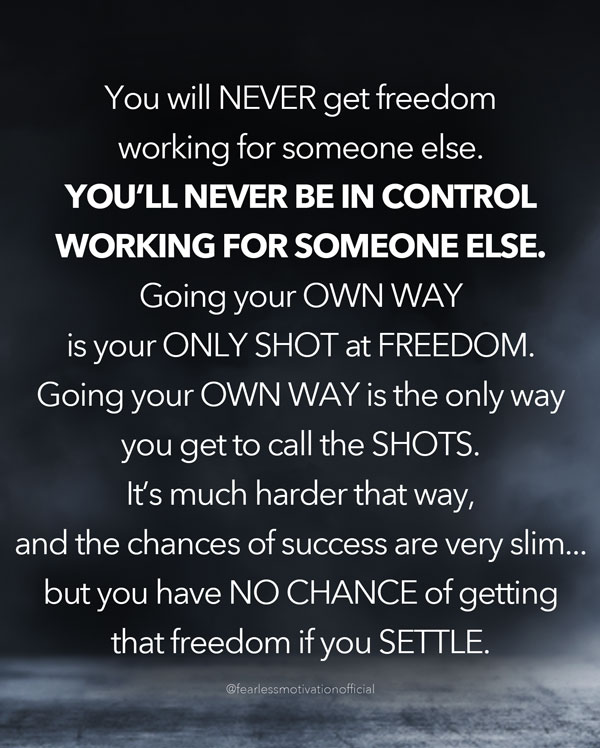 If you don’t BECOME SOMEONE ELSE you will not be able earn your freedom.  The person you are right now, might not be good enough for the LIFE YOU WANT.  If you really want it… you’re going to have to become someone else.

The more you learn, the more you develop, the more skills you grow, the BETTER YOU BECOME: The greater your freedom.

If you think your success in life is determined by factors OUTSIDE OF YOUR CONTROL then, YOU WILL NEVER BE IN CONTROL. If you don’t believe you can do it… YOU WILL NEVER give the effort required to do it.

THERE HAS NEVER lived a self-made human being who created a successful, fulfilled life by LUCK, CHANCE or having everything work out perfectly.   FREEDOM is earned.  LIVING a life you love will not come unless you are willing to EARN IT.   Are you willing to EARN IT?

How do you get that freedom? There’s not one element… there’s not one trick or hack… It’s a relentless pursuit of self improvement. And the more you improve… the greater your chances of living a life on your terms.

Most people think the safe bet is taking a comfortable job. You get benefits, you get holidays… but in doing that you sacrifice your FREEDOM. The safest bet is always to BET ON YOURSELF. It won’t pay off right away… and that’s why most people quit. They don’t back themselves and that’s why they LOSE their FREEDOM!

When you bet on yourself and back yourself to win in the END… you are placing a bet on your future.

No boss to tell you what time to start. When to take breaks or have holidays. No one to decide what benefits you get or don’t get: YOU EARN YOUR BENEFITS.

And the best part is: I’ve never met someone that earned their freedom who just stopped there… Successful people don’t stop. If they become financially free… they keep going… because they have that PASSION most people lack… they CHOOSE TO WORK and they choose to work harder than ever, even when they don’t have to… because they LOVE THE PROCESS.

I don’t know about you but I refuse to spend half my life doing something I hate!  I choose freedom!

If you want that freedom, and you’re not there yet, and you don’t know how to get there… here’s how: Never stop. Never stop learning… and never stop applying what you learn.

You have to force yourself to get better every single day… it’s those tiny improvements… done one million times… the improvements that seem insignificant as one, but when added up over years… calculate into your freedom.

WORK UNTIL YOU CAN SAY:
“I’M LIVING LIFE ON MY TERMS”
“ I CREATED THIS”
FREEDOM!

Ben Sweetland once said:   “There are two kinds of day dreaming… that which is backed with action… and the one which fades out into nothingness.”

Without ACTION your DREAMS will remain dreams and fade into nothingness. The only way your DREAMS have a chance of becoming YOUR REALITY is with ACTION.     Consistent action. INTENTIONAL action. Action taken every single day with laser like focus.

It’s your ticket to FREEDOM.   The price you will pay for that ticket will not come cheap.   It will NOT be EASY.   But if you’re willing to pay that price… your future will be easier. 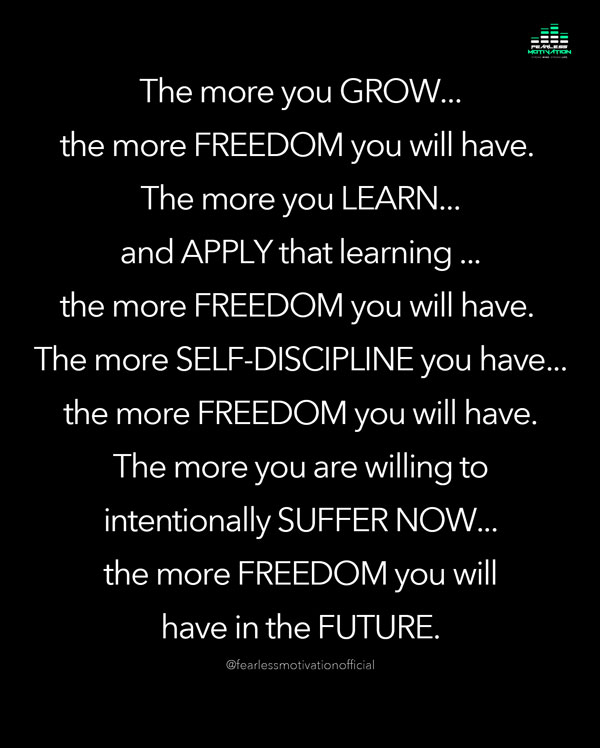