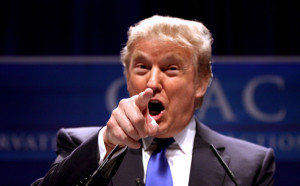 Long before he became the star of the iconic reality show, ‘The Apprentice,’ Donald Trump took New York real estate by storm. Building on the initial success of his father, Donald Trump succeeded in turning his last name into a synonym for class, ambition, luxury, and solid gold value. The Trump brand graces many of the most prestigious buildings in some of the hottest real estate markets in the world.

While it is easy to admire Mr. Trump for all his success, let’s not forget that success, Trump-style, has not been a one-way street. Mr. Trump’s most famous setback was his investment in New Jersey’s Atlantic City. Trump Entertainment Resorts Inc, the hotel and casino bearing Trump’s name burned a hole through Mr. Trump’s pockets. Moreover, Mr. Trump has told several stories of facing tough challenges in the real estate market as his empire weathers the inevitable roller coaster ride real estate property markets go through.

Despite all Mr. Trump’s challenges, and perhaps because of them, Donald Trump continues to embody the brash, ‘can do’ attitude that separate hardy entrepreneurs from everyday working Joes. Here are the top five insane wealth creation strategies Donald Trump used and still uses to amass his massive multibillion dollar fortune.

Strategy #5: Your biggest asset is your personality

There’s no mistaking Donald Trump’s personality. Whether you call him brash, irreverent, ‘in your face,’ or even a boor, the truth is he’ll get your attention. It is precisely this larger than life persona that has made Donald Trump a force of nature in the topsy turvy world of marketing.

Think about it-while other companies spend millions of dollars on carefully groomed marketing campaigns complete with sliced and diced media analytics and data, Donald Trump only needs to open his mouth about the controversial topic of the day to ensure that the global media will mention his name for several days. He has made an art form of self-promotion by simply being himself. You can do this too.

To create wealth, you need to get people to notice you. While hard work and knowing what you’re doing are definitely required, they aren’t enough. Everyone can work hard if given the right motivation. Everyone can be competent and knowledgeable. Being smart isn’t enough in a world full of equally smart competitors.

By building a brand around your personality, you can go a long way in standing out from the competition. More doors (and deals) will be open to you.

Strategy #4: Don’t be afraid to drive a ridiculously hard bargain

In Mr. Trump’s classic book, ‘The Art of the Deal,’ The Donald lays out one of his most feared features-he isn’t afraid to walk away from the deal if the details are wrong. This might seem counter-intuitive but this is precisely the kind of hard-charging dealmaking that enabled the Trump brand to appear in some of the most luxurious and prized real estate properties in New York City and other hot property markets in the United States.

It is this ‘pedal to the metal’ negotiating bravado that has punctuated Donald Trump’s much-storied career of getting property at great prices, developing them, and pushing the most lucrative prices possible on finished units. Sure, this is the simple and classic’ buy low, sell high’ principle but Mr. Trump takes to a whole other level.

Strategy #3: Everything you do impacts your brand

There was a point in the late 80s where Donald Trump’s business strategy could be boiled to one sentence: put your name on everything. It seemed that everything the Donald touched not only succeeded but succeeded because it had that enviable Trump brand on it.
The reason why this strategy succeeded (and judging by the fortunes of the long-running “The Apprentice” show-continues to succeed) is the fact that Donald Trump is sure to make all public perceptions of his persona lead back to his brand. Brash and daring? That’s the Trump brand. Risk-taking and optimistic? It all leads back to Trump.

The underlying principle behind this strategy is that the stronger you brand becomes, the more value it creates both now and in the future. In fact, you can leverage your brand to produce returns long into the future. If you ever need proof of this, just look at all the luxury buildings built in many global real estate markets which sports the Trump brand. Donald Trump didn’t build these structures-he simply licensed his name.

There’s been some definite debate regarding how rich Mr. Trump really is. After all, a huge part of his brand power rests on how loaded he is. This is why Mr. Trump’s made noises in the past regarding the ‘underestimation’ of his wealth. For example, Forbes Magazine reported Trump was worth $2.9 billion but he claims he’s worth $7 billion. The reason why Trump insists on a higher net worth is simple: the wealthier he is reported to be, the more lucrative the Trump brand becomes. In essence, he is selling a lifestyle. This lifestyle is embedded in the Trump brand.

If you want to build wealth, you have to build a solid brand that mirrors a lifestyle. This brand opens doors, gets deals done, and raises money.

Strategy #1: Don’t be afraid to leverage

A large chunk of the Trump empire was built using borrowed money. Entrepreneurs who are serious about the power of their dreams and are truly confident in their grand ambitions must overcome the natural tendency to get scared at borrowing huge amounts of cash. After all, if you make the wrong call, not only do you lose out on your investments-you might even lose your shirt! Bankruptcy is definitely weighing on the minds of many high flying entrepreneurs.

Donald Trump’s willingness to go into debt highlights the fact that if you want to build an empire, you can’t be afraid of what can happen. Instead, you need to let your passion for success pull you through the uncertainty. You have to keep taking risks and keep scaling up. Leverage or taking out huge loans to finance your dreams is a key test of this strategy.

Donald Trump is many things to many people. One thing is clear though, the man got to where he is by employing bold strategies that played up the larger than life parts of his personality. We all have at least some of this in our personalities. You can use the same five strategies outlined above to build your own personal empire.

Have your say on Donald Trumps Lessons Wealth Creation Strategies below