21 Illuminating Shahrukh Khan Quotes to Bring Out Your Inner Hero

Shahrukh Khan’s story is one in a million. Losing his parents at a very young age, he had to become the man of the house and support his sister who couldn’t bear the loss of her parents.

He worked day and night, paid his dues, and became the most respected actor not only in India but on an international level. He is known as ‘King Khan’ in India and has a net worth higher than many top Hollywood actors.

He was awarded Padma Shri, the fourth highest civilian award in India, and Ordre des Arts et des Lettres (Order of the Arts and Literature) from France for his “exceptional career” in the world of cinema. Later, he also received the Legion of Honor, the highest civilian honor in France.

It is clear that Shahrukh Khan has reached the pinnacle of greatness not only in cinema but also as a hero of many people. So here are the 21 greatest Shahrukh Khan quotes to bring out the hero in you.

1. There is only one religion in the world – hard work.

We hope and pray for good to happen in our lives. But even the higher power only works for you if you work for yourself. So if you have to believe in something, believe in hard work.

2. My biggest achievement is that I can make people smile just by my presence.

Everyone has the ability to touch others’ lives in some way or the other. And as Jim Carrey says, that’s the real currency in life: the impact you have on others. Shahrukh Khan’s films have made people around the world love him so much that even his presence makes them happy.

3. Don’t become a philosopher before you become rich.

It’s okay to be a great thinker. But thinking alone won’t get you anywhere. So it’s important to be practical and earn money so that you can enjoy the pleasures of life.

4. It’s okay to be confused. Confusion is the route to all clarity in the world.

As dawn follows dusk, clarity follows confusion. As Tony Robbins says, the only problem people have is they think they shouldn’t have problems. Problems call us to a higher level. 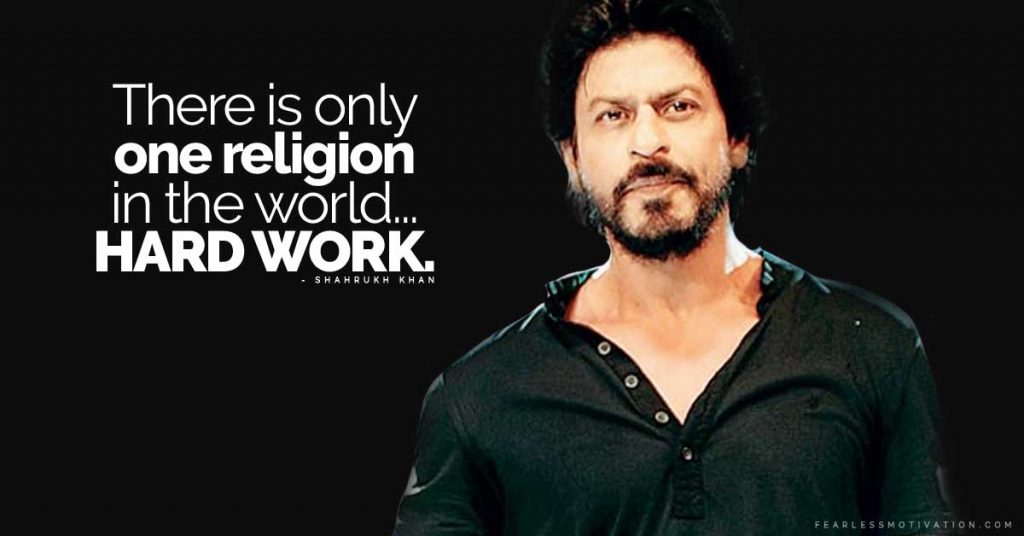 5. There might come a time when you feel lonely. That is when your creativity will be like your best friend.

J.K. Rowling had lost everything at one point in her life. There were days she wouldn’t eat so her daughter could eat. But that dark period made her seek happiness in her creative works. And that culminated into one of the best fiction novels ever written in history.

6. There is no such thing as normal. Normal is just another word for lifeless.

People make stereotypes and anything different than those stereotypes becomes “abnormal”. Realize that you must live by your values and forget how judge yourself.

7. Money is a good thing to run after. It is very important to be financially stable but you have to keep your wrongs and rights in mind. Don’t shy away from earning but without selling your soul.

Money is a tool to create life. Don’t be swayed by people who tell you to pursue your passions without caring about money. But don’t sell your soul either. In the end, how you lived is more important than how much you earned. Live with dignity.

8. Success is not a good teacher. Failure makes you humble.

You sleep on a success, you might wake up with a failure. Success makes smart people think that they can’t fail. It’s essential to be vigilant not only when you’ve failed but when you’ve succeeded.

9. If you aren’t charged up about doing something, if you don’t have what in Hindi we call the “Josh”, the fire in your belly for it, then don’t do it.

We need to do things because we want to do them and not because we have to. Life is too short to fulfill someone else’s dreams.

10. Whatever it is that pulling you back, is not going away unless you stand up and start forging your path in the opposite direction. Stop whining and start moving.

The strange thing about most people is that they just stare at problems as if they will get solved by themselves. But we need to take charge and become decisive if we are to rise above them.

11. Art is more important than the artist – have no attachment to your own art. It is regressive, move on.

People need to forget their own creations and move on. It’s not about what you did ten years ago. It’s about what you’re doing now that makes who you are.

12. A moment will come when there isn’t anything that’s going right. But don’t panic. With a little embarrassment, you will survive it. All you have to do is make a move and move on a bit.

Things will go wrong. You might have to show up when you don’t want to. In that moment, don’t look for confidence, because it’s okay not to be. Instead, look for acc

13. Making the mistake of thinking your dreams will take flight without you having to flap madly at those wings to get up into the sky, is plain silly.

Your plans for the future won’t work unless you do. In fact, many people don’t even have a simple and actionable plan to achieve their dreams. They have just stories that start with “someday”. Don’t tell yourself “someday” it will happen because it won’t.

14. Every morning I wake up and think of the same thing that this is the first shot of my life so I better make it stick. – Shahrukh Khan

Live every day as if it were the last day of your life. Because one day it will be. Shahrukh Khan realized this fact early on in life when both his parents died at the age of 15. He stopped taking life for granted and soon became the greatest entertainer in the whole world.

15. Your innermost secrets you should confide to your mother and your fears to your father. I have neither, so I end up confiding it to my acting.

When there’s nobody out there to support you, you will find that it’s your own creativity that can provide you the greatest support. Jim Carrey found support in comedy. So did Robin Williams. You just need to go where your creativity leads you.

16. Don’t let your fears become boxes that enclose you. Open them out, feel them, and turn them into the greatest courage you are capable of.

“Take it easy” they will tell you. But if you always take it easy, you’re never going to get anything worthwhile. Start dissecting your fears. Fear is an emotion, feel it thoroughly, ask yourself, “What am I afraid of?”

Instead of pushing the fear away, embrace it. Soon you’ll find what you’re afraid of. Then, make a conscious decision to take positive action so that the fear goes away.

As Shahrukh Khan says, hard work is the only religion. Work hard and play hard. Don’t worry about anything else.

18. Don’t ever treat your little insanities as if they are aberrations that ought to be hidden from the rest of the world.

Being quirky doesn’t make you a weirdo. It makes you unique. Embrace your quirks because nobody else has them except you. Own them! A great piece of advice from Shahrukh Khan.

19. When you get to be 50, you will know that the bulk of your regrets are from not having done what you wished to do.

Too many people lead lives of quiet desperation. Realizing that your time is limited will make you value the opportunities you have right now. Not only you should realize the impermanence of life, but also the impermanence of each phase of life. You won’t stay young forever. Probably in 10 years, you will not be able to go on motorcycle trips or bungee jumping with your friends.

20. I realize that things don’t always need to be functional to fulfill a need. Sometimes when things are broken, the greatest creativity emanates from their fragments.

It’s only when we are broken that we see things from a different perspective. We are no longer afraid of the small things because we have known what it feels like to lose the big ones. In such moments, we have the opportunity to transcend our limits and do something we have never done before.

21. As an adult, I have come to understand that there is nothing of more value than your capacity for diligence and your ability to work hard.

The really worthwhile things in this world never come by chance. The greats among us work really really hard with single-minded devotion will things out of existence. In the end, about thirty years of life are going to go into work. And only when you work diligently, the work becomes meaningful.