How to Become Mentally Strong: Embrace the Suck (+Video)

David Goggins is often called the toughest athlete on the planet. He is a former Navy SEAL and has completed three hell weeks in a single year and holds the Guinness World Record for the highest number of pull-ups done in 24 hours.

Coming from a tough and abusive childhood, he realized that joining the army was his only way of getting salvation and becoming mentally strong. Even when he had a hole in his heart, he was able to run over 100 miles in 24 hours with shin splints, ankles taped up, stress fractures, and peeing blood.

He knows everything about embracing the suck. Here are five key lessons from David Goggins to become mentally strong.

1. Exceed Your Expectations, Don’t Manage Them

When we fail to achieve something, people around us try to manage our expectations. For example, suppose you decided to lose 100 lbs. of weight in the beginning of the year. Now six have passed and you’ve not lost any weight. You have been lazy.

Some people may try to manage your expectations by saying, “No, you’re not fat. Appreciate your body as it is” or “Don’t worry about your weight. You are more than your looks.” Sure you are not entirely your looks,  but you set a goal and didn’t achieve it.

Before David Goggins joined the military, he was an insecure person and his job was as a pest control, spraying cockroaches. He hated that job.

One day he came back home from his job, took a shower and sat to watch TV. He turned on the TV and saw Navy SEALs going through hell week. Out of hundreds of candidates, only 15-20 guys survived till the bitter end. Everyone else quit.

After the 15-20 finalists made it through, their commanding officer said something that had a lasting effect on Goggins’ mind, “We live in a world where mediocrity is often rewarded. These men up here, detest mediocrity.”

Think about your own life. Have you been satisfied with average? How can you go all in? What steps can you take to embrace the suck and become mentally strong? 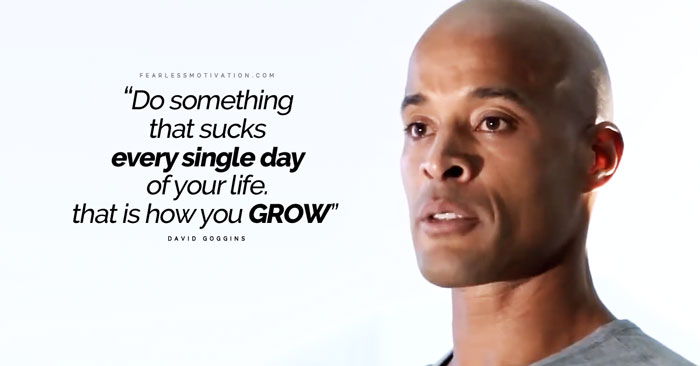 Goggins says that the mind has a tendency to find ways to escape when we are going through challenges -“why am I doing this to myself?”, “the water’s too cold”, “the sun’s too hot” “I’m waking up too early”.

You have to create a wall around all the ways out in your mind. Instead of telling yourself that it’s too tough, you have to ask yourself a simple question – How can I get through this? This is how you become mentally strong.

You see this simple question brings your focus from the problem to the solution. And that is when the magic happens and you are able to solve seemingly ghastly problems!

4. Focus on Your Weaknesses, Not Your Strengths

David Goggins often says that to grow in life, you have to suffer. And if all we’re doing is tripling down on our strengths, then where is the suffering. We’re just doing what we already know.

In order to grow, we need to step into unchartered waters, where our strengths won’t support us, and build new ways of surviving through those waters. That’s how we are supposed to grow.

5. Do Something That Sucks Every Day

The path to greatness is not smooth. You have to sacrifice laying in your bed till late afternoon or watching Netflix till three in the morning. Greatness doesn’t come from arrogance, it comes from huge sacrifice.

Michael Phelps worked for every single day (yes, no weekends off) for five years before he became the greatest olympic swimmer and one of the greatest athletes ever.

If sacrifice sounds harsh, learn to love the taste of victory. Because after you have sacrificed comfort, the rewards are every bit worth of the effort.