There are so many successful people that it’s hard to choose one. Learn how each of these eight people could help mentor you and help change your life. 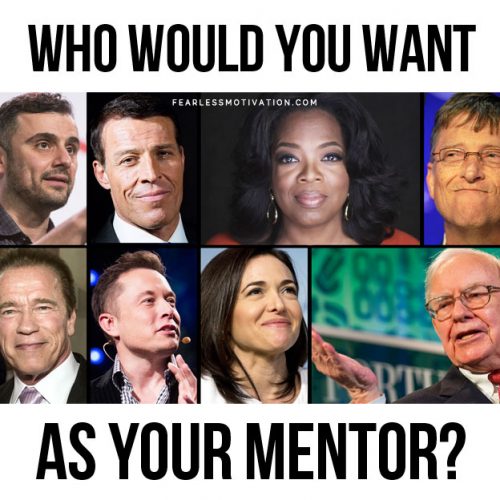 Who would you choose as your mentor and why?

Tony Robbins would be an incredible mentor as he has achieved insane success. He went from a janitor to a best-selling author, performance coach, and philanthropist. His work has helped millions of people change their lives.

The great part is that Tony is very accessible. While not direct mentoring his seminars are available around the world. Attending one seminar could help you learn to:

With his mentorship, there is no doubt you could change your life forever.

Like Tony Robbins, Oprah Winfrey has defied the odds to accomplish an amazing amount in her life, despite a very challenging early life. Not only is she one of the most respected women in the world she is also one of the wealthiest.

With her mentorship and inspiration, you would be able to learn what it takes to succeed when times are tough. No matter what your background is Oprah would have a solution and show you the path to success. Dubbed the “Queen of Media” she would help anyone looking to enter the entertainment world.

Who wouldn’t want Bill Gates, the billionaire founder of Microsoft to mentor you? While he does do some public speaking, Bill is a private individual. It is well known that Bill is a voracious reader and avid learner. He has said to spend two weeks at the end of each year on a “think” vacation.

Bill Gates would help mentor for your first entrepreneurial journey or philanthropic mission. He would challenge you to think differently and not be to challenge status quo.

Sheryl Sandberg is the Chief Creator of Facebook and author of the successful book, Lean In. She would be an incredible mentor for anyone who needs some career motivation. As the first female board member of Facebook, she could help you make bold decisions and learn to trust yourself.

When it comes to visionaries there might be no one who dreams on a bigger scale than Elon Musk. He is the billionaire founder of SpaceX and Tesla. If you have any idea that you want to bring to reality, Elon would be no doubt be your biggest resource.

If Elon was your mentor prepare to work hard and put in long hours. Sometimes he puts in 20 hours days and has slept on the Tesla factory floor, despite a 20 billion dollar net worth.

Warren Buffett is the founder of Berkshire Hathaway and started his investing career at eight years old. He has studied the economy and stock market for the past 80 years. His expertise would be great for anyone in the financial sector.

At 87 years-old Warren still loves his work and could help show you how to do the same with your future. He is an avid believer in continued learning and always following your passion.

While all the previous mentors are great, Gary Vee might be the most down to earth and relatable. Gary “crushed” his 20’s by working hard, learning the wine business, and starting a media company.

As a mentor, he would be very similar to Elon Musk. His work ethic is unparalleled and basically coined the term ‘side hustle’. Thankfully, he produces an enormous amount of free content to help motivate and inspire people worldwide.

Arnold Schwarzenegger would be an amazing mentor as he accomplished so much in so many different areas of his life. He was a 7x Mr. Olympia champion, top-grossing actor, and former governor of California. As a mentor, he would show you what it takes to succeed in any area of life and overcome any odds.

Who would you choose to be your mentor? Why do you think they would help get you the results you want faster?